“The outcome, after a lot of consultation, was the removal of my left eye”

Optometrist director at Raxworthy Visioncare, Richard Taylor, and his patient, Allan Napier, discuss an urgent referral for the possible recurrence of melanoma 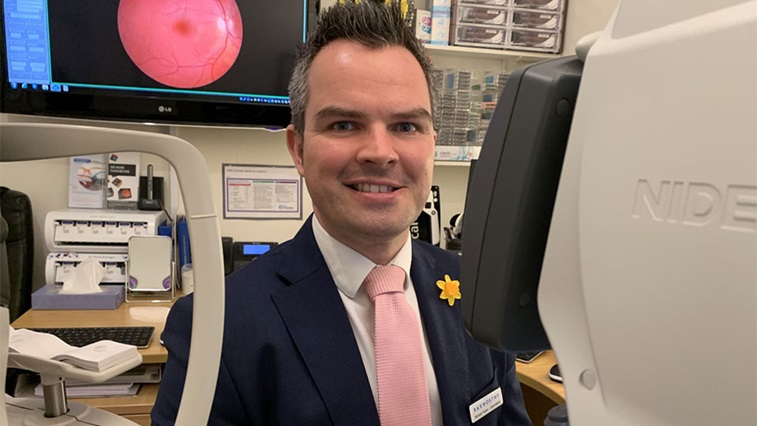 What did your optometrist identify during your sight test?

Allan Napier (AN): My sight in the left eye has been poor since 1995 following an operation [radiation plaque therapy]. My vision was almost non-existent, but it did not affect my normal life as I had got used to it. During my annual sight test, my optometrist, Richard Taylor (pictured), found a flare up around the old scar. He referred me to Bournemouth Eye Unit. During my referral I felt rather taken aback and upset.

AN: Yes, I was sent to Moorfields Eye Hospital in London. The outcome, after a lot of consultation, was the removal of my left eye in September last year. Since then I have had a temporary false eye fitted. I am waiting for a permanent eye at the moment. In February and March, I had radium treatment at Poole Hospital every day for 20 days.

Have your views on the importance of sight tests changed as a result of this experience?

AN: My view on the importance of having regular a sight test is very strong. Everyone should have one on a regular basis.

AN: The experience of this has not changed my lifestyle but it has made me more careful.

On my annual sight test, my optometrist, Richard Taylor, found a flare up around the old scar

Richard Taylor (RT): I had been looking after Allan for four years and knew his history. I always measure the acuity of a weaker or amblyopic eye, even if it’s just counting fingers, so I can document and quantify when a patient reports loss of vision. I remember Allan’s eye as he had a radiation plaque at Moorfields Eye Hospital years ago and his retina had a very distinct appearance. When I saw the haemorrhages and sub-retinal fluid I knew it wasn’t going to be good news. I had a discussion with Allan about his condition in the past and we both knew it may re-occur.

RT: I advised Allan that his reduction in acuity was likely to be because of the bleed and possible recurrence of the melanoma, and I explained the urgency in which he needed to be seen.

RT: I wrote a referral letter and faxed it the Bournemouth Eye Unit so that they could decide the urgency. I then phoned through to a triage nurse to ensure the referral was received. A consultant reviewed it and advised they would be in touch with the patient. Allan was then sent to Moorfields Eye Hospital and saw the same consultant who operated the first time around in 1995. I received a fax from the consultant asking for an email of optical coherence tomography images and photos I had taken for comparison. He then wrote to me advising the tumour was atypical as it has an extra-scleral extension near the optic nerve and they had advised enucleation.

RT: Allan advised me that he was going to have the eye removed and thanked me for picking it up. He has kept in touch during the whole process and has undergone some radiotherapy recently. He has a temporary prosthesis in place at present and is going for a permanent one once the course of radiotherapy has been completed. I will be involved in the maintenance of the prosthesis and his ongoing eye care.

RT: 1. Always measure the acuity of a weaker or amblyopic eye – balance lens simply won’t do

2. Be confident with what you are seeing and portray that to the patient

3. Get to know your local eye unit, its consultants and its protocols. Don’t be afraid to ask for a consultant’s opinion as well as ongoing feedback. Building relationships with ophthalmologists is vital.