Clinical lead optometrist at Bayfields Opticians, Diba Choudhury, and her patient, Jacqueline Daccus, discuss the referral that led to treatment for suspected AMD 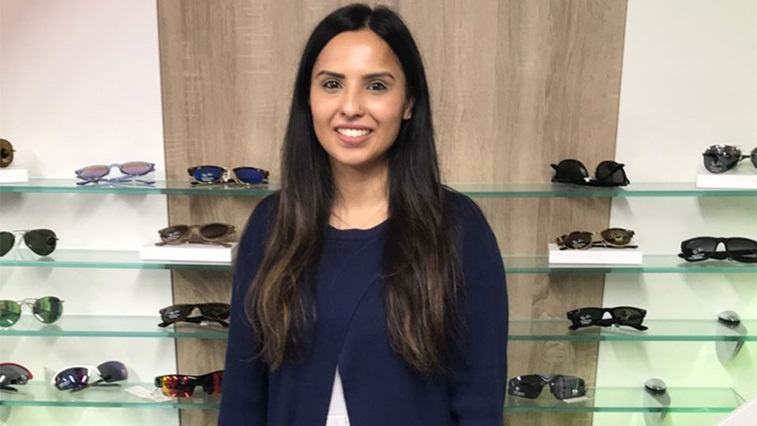 Had you experienced any symptoms before going for a sight test?

Jacqueline Daccus (JD): Yes, I had. I only have one eye and I have my eyes tested regularly. In 2015, I noticed a huge change in my vision in my right eye, which is my good eye. For example, reading a book or watching TV was very up and down – it wasn’t levelling. Buildings with a straight architectural design were very wavy. I went to see Diba straight away and she referred me.

What were the next steps that Diba suggested?

JD: Diba was marvellous. She explained that she thought the macular was pulling away from the retina and referred me immediately with suspected age-related macular degeneration (AMD). The hospital sent for me very quickly, but that process was harrowing, frightening and the way I was treated was horrendous. Diba happened to ring me the next day and I was terribly upset. She asked, ‘How did you get on?’ and I burst into tears. Diba said, ‘Ok, let’s send you to Optegra.’ I had no knowledge of Optegra previously. I was told that it was difficult, but they would take a look. I was filled with positivity.

What was the outcome?

JD: I was discharged last July, having been a year without an injection. The conclusion was that I did not have AMD. They treated me as if I did have it, but they were sure that this was something that had happened because I’d been so short-sighted in my good eye.

How has this affected you in day-to-day life?

JD: I’m a fine artist and I worried very much. This affected my central vision, but because of the treatment I’ve had and a lot of determination, and my work is not inhibited at all. It takes a little longer, but I think you have to be determined and not let this condition define you.

How has this experience changed your life?

JD: When all of this was happened, my consultant was working so hard and didn’t really know what it was. It was like living in a two-metre box and I was very depressed. When the treatment started and I could feel the benefits, I felt so grateful that I’d found someone to help. It’s not nice having a needle stuck in your eye, but because my consultant at Optegra was so caring and respectful, I felt that I could do it. Now, I feel very positive. You can’t let it define you and you have to carry on. It very rarely gets me down now because I am determined that it won’t.

Diba Choudhury (DC): The patient had noticed that there was distortion in her vision. She described it as having wavy lines and she was really worried. The signs were there for AMD but you’ve got to do your tests first, look at the result and take it from there.

DC: Having optical coherence tomography in practice is really good because we have a visual way of explaining things using the results. We looked through this together and I showed her where I thought the problem might be coming from. She was relieved that she wasn’t imagining it and that there was evidence of there being something wrong. As an optometrist, you know what you’re describing, but to the public that might be hard for them to picture. If you can show them exactly where the problem is, it makes much more sense to them.

DC: Once I had explained what I had found, I looked at getting her seen at the hospital as soon as possible. We had the option to refer on the NHS or go privately. Initially, she chose to go via the NHS and got an appointment. After her first appointment, she was very anxious and decided to go privately instead. The vision in Jacqueline’s right eye was very important in this case because she has not had vision in her other eye since childhood. She relies on the vision in her right eye.

How have you been involved since making the referral?

DC: Jacqueline is very good at keeping in touch with me. She let me know about what happened during the appointment and what she expected to happen next. I now see Jacqueline annually for a sight test.

What are your three top tips for making a referral?

DC: 1. You need to stay calm. Bad news for the patient can be upsetting, so it’s important not to show signs of panic

2. You have got to be careful about how you explain what’s going on. You need to be very clear and informative and explain it in terms that the patient will understand

3. Follow up with a courtesy call. I normally schedule a call a week or two later just to make sure that the patient is ok. It’s good to know what treatments the patient is undergoing, so that when it comes to their next appointment, you are informed about what’s been happening.