Dr Kanski wrote the classic textbook, Clinical Ophthalmology – A Systematic Approach, which has graced the bookshelves of hundreds of thousands of optometrists and optometry students worldwide since the first edition was published more than three decades ago.

Dr Kanski studied medicine at the Royal London Hospital Medical School before completing an internship at Moorfields Eye Hospital and going on to work as an ophthalmologist at The Prince Charles Eye Unit.

Dr Kanski authored more than 30 ophthalmology textbooks over his career. He was awarded an honorary fellowship by the Royal College of Ophthalmologists in 2004.

Dr Brad Bowling, who authored the eighth edition of the textbook, described Dr Kanski as an “incredible mentor and friend.”

“His work touched the lives of optometrists and ophthalmologists worldwide,” Dr Bowling shared.

He described Dr Kanski’s influence on his own career in the preface to the textbook.

“I recall vividly when, just prior to my first ophthalmology post, I contacted two registrars independently to enquire about initial textbook choice, receiving a curt single-word response from both: ‘Kanski,’ with the implication that there was no need to ask,” Dr Bowling wrote.

“Big shoes to fill,” he added.

Dr Bowling first met Dr Kanski at The Prince Charles Eye Unit in Windsor while he was an ophthalmology residency programme.

Dr Kanski had retired from clinical practice but continued to attend the unit’s weekly education meetings.

Dr Bowling remembered Dr Kanski’s “encyclopaedic knowledge of ophthalmology and unerring ability to isolate the critical issues in a topic, not to mention his incisive wit.”

By the book: UK optometrists on their copy of Kanski

“I got my copy in my first year of university. When I first qualified we didn’t have Google search; there was no internet. I remember sending the patient out to the waiting room and leafing through it to check the diagnosis. I’m not sure what I would have done without it. My original copy it is a bit tatty now, but I have a newer one too. I couldn’t quite bring myself to throw out the original. I still use Kanski. When we looked it was the only textbook in every office in WOPEC, Cardiff University.” 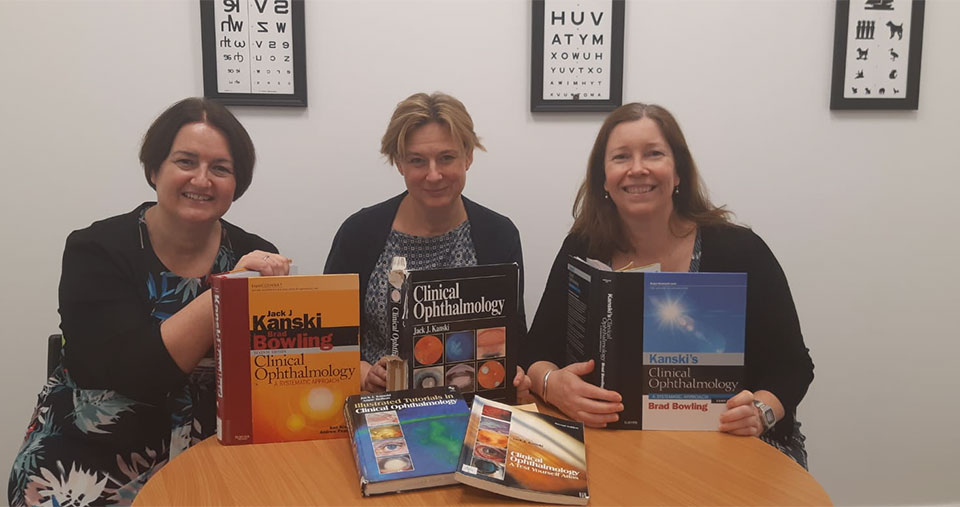 “I know the exact date I got mine (6 July 1999) as my dad wrote in it as a graduating gift. At university, I used to sign out an earlier edition from the library. This meant I could keep renewing it for my whole student days because everyone wanted the latest edition. It cost about 150 quid, while I was at university so I couldn't buy it. I do occasionally use it when writing the poster trails or other CET to check my facts. One of its other uses, I found, is to get more elbow room around you on the train: simply open it up at an icky page and watch the other seats fill up before the one next to you.”

“The images are many, which made it a great test-yourself revision tool. Before fundus cameras were widespread, Terry Tarrant's beautiful illustrations were crucial to show you the rarer pathologies.  This was THE textbook for ocular diseases and was simply referred to as ‘Kanski’.” 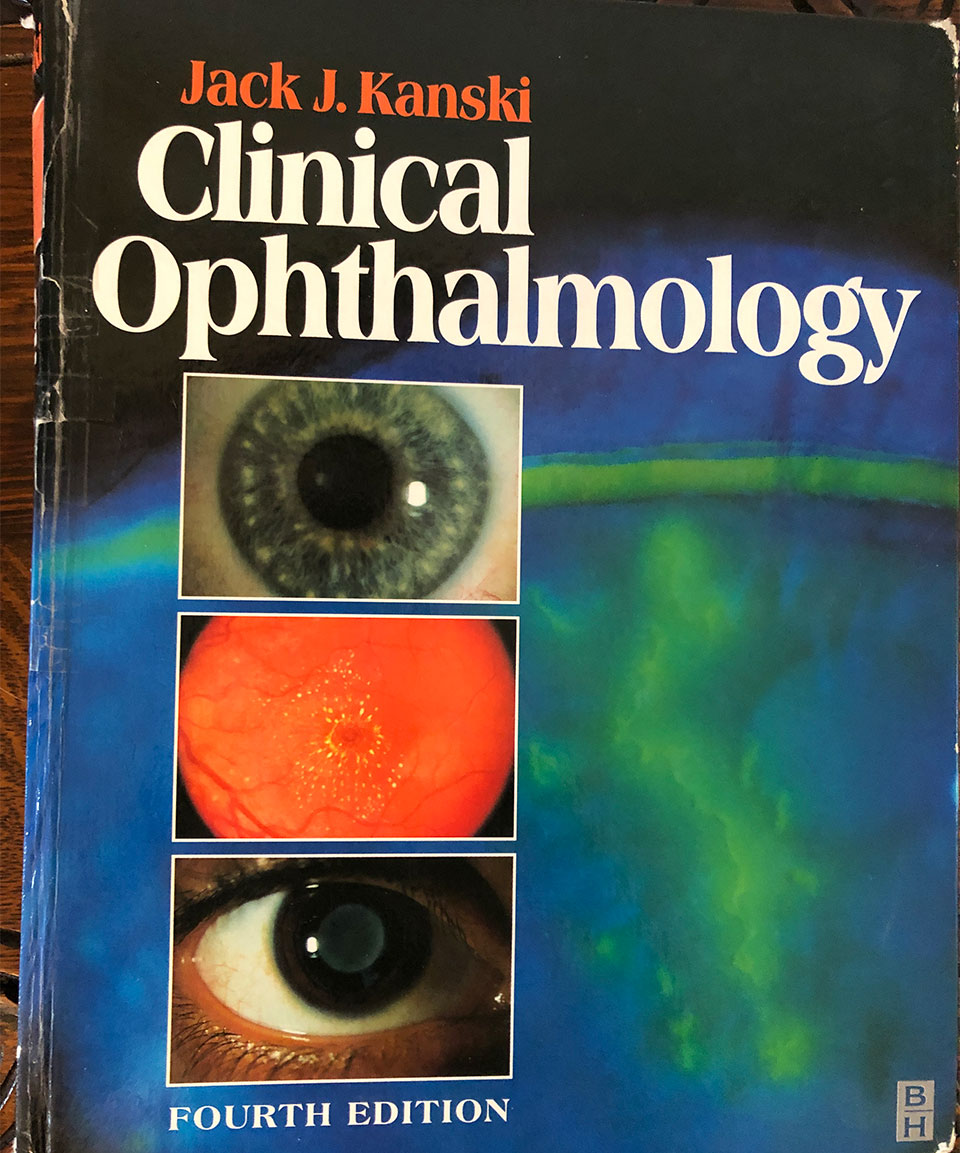 “My Kanski was the most expensive book I bought at university (Cardiff 1986–1989) and at nearly £100 in the late ‘80s it was a painful student purchase. However, we all buy one and then keep it forever. Mine is a second edition bought new in 1989. I kept it on my consulting room shelf for many years until my career took me into professional services and then public health and technology meant I could look things up online.” 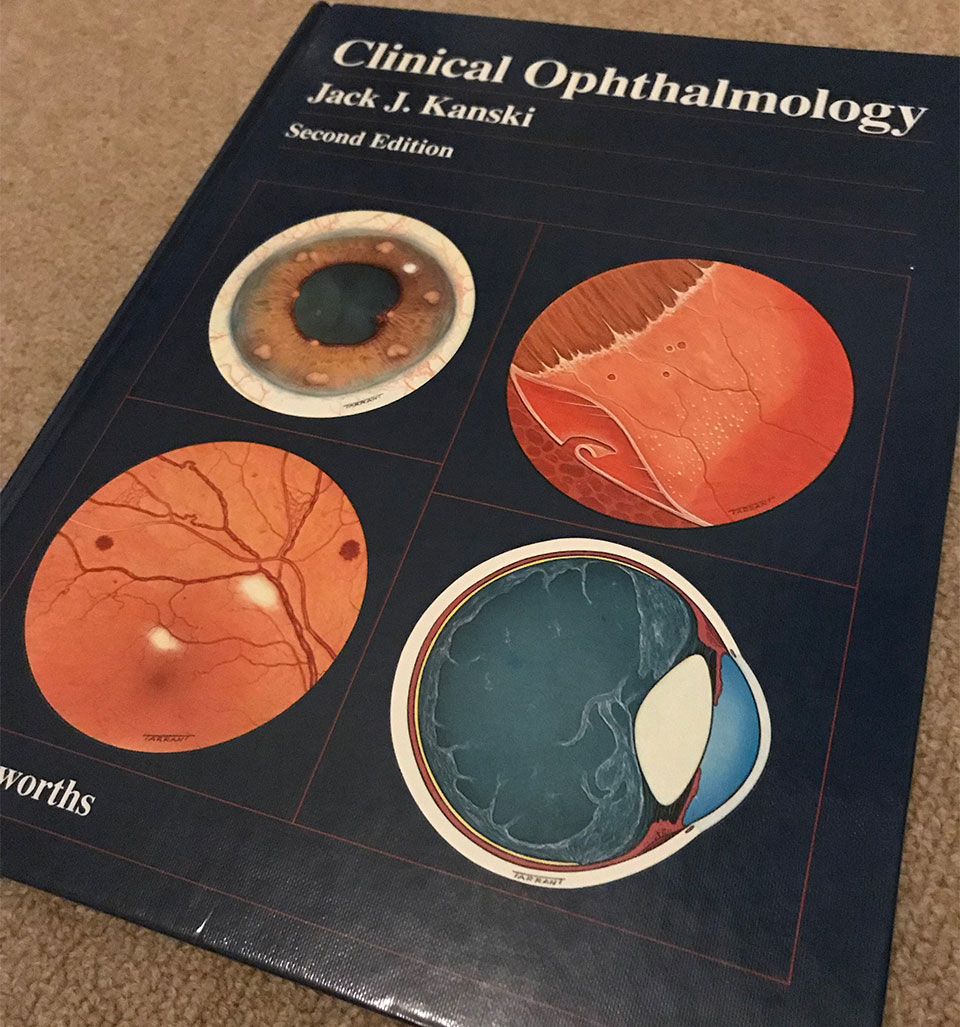 “When I first practised the ‘eye bible’ was eight volumes by Sir Stewart Duke-Elder. Kanski updated the knowledge and simplified the aetiology with the most impressive photography of all pathologies. Whilst mainly for ophthalmologist usage, it gave me as an optometrist a good understanding of the subject area. Today’s optometrists with their therapeutic qualifications find it particularly useful.” 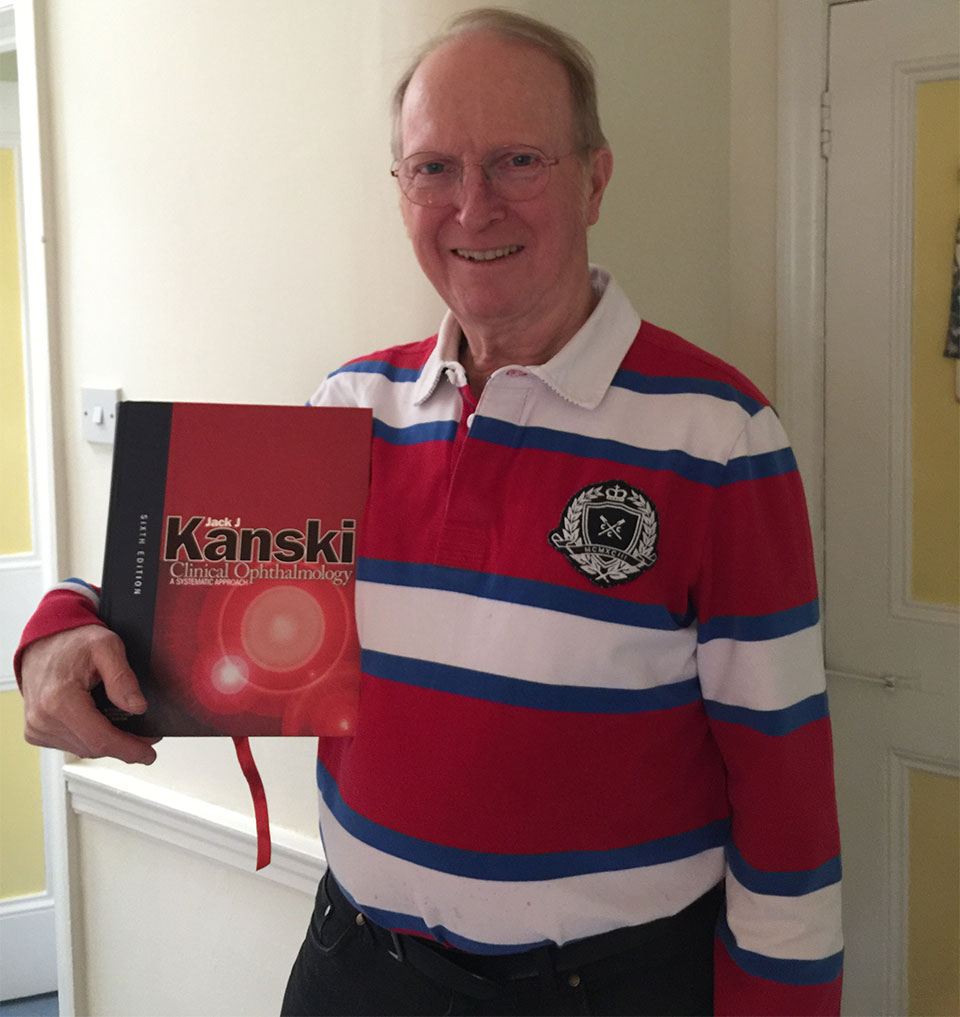 Nigel Burnett-Hodd with his copy of Kanski