Cheshire grandmother, Bernice Kyte, 67, shares her experience of being diagnosed with ocular melanoma 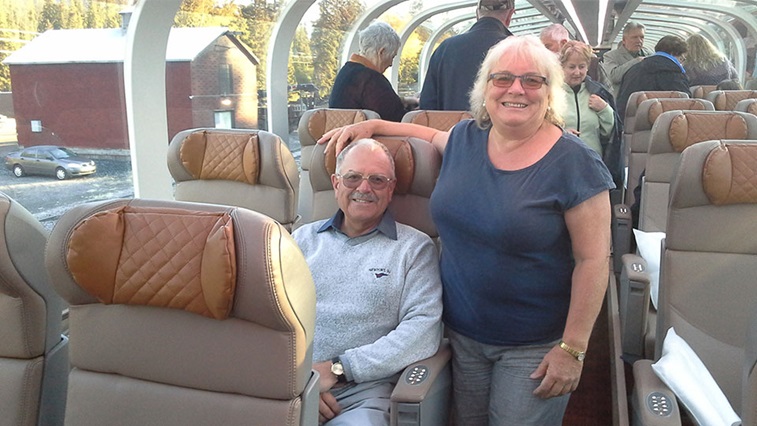 In 2003, I started to notice that I had shooting lights in my vision. It was a little bit like Halley’s Comet – a light would fly across my vision with a tail behind it. In September of that year, I thought, ‘There is something wrong with my sight.’ I was in my late 50s and wondering if it was age-related. I went to an opticians in England, and they said, “You’ve got better than 6/6 vision you are fine.”

I retired in January 2004 and my husband and I went on a round the world trip. We got as far as New Zealand. We had done the North Island and had just gone across to Nelson on the South Island. I was driving at night and I knew then that there really was something wrong with my eyesight. I said to my husband, “I am going to go and get my eyes tested.”

The consultant told my husband and I, ‘I’m sorry to say that it is ocular melanoma.’ We cut our trip short and we flew home straight away the next day. I went to Moorfields in London they did plaque therapy and then I attended regular check-ups.

After five years, the whole tumour grew again. I did plaque therapy again and it seemed OK. Seven years after that they discovered a tumour in my liver. There was only one, so they operated and cut it out. Then a year and a half later they found more and this time they couldn’t operate because it was what they call peppering – lots of little tumours.

If you have any doubts that things are not right, you really need to go to an opticians

So far, I have invested £200,000 in my treatment. We had to sell our home and move into a much smaller house. I had hoped to eventually be able to help my two children with an inheritance, but that is probably not going to be the case. Now we are at the point where we have now run out of money so if I do need further treatment, it will mean re-mortgaging our new home.

I understand this is a very rare cancer and the NHS is not a bottomless pit, but it somehow doesn’t seem right that you cannot get the treatment you need to prolong your life without having to sell your home. I feel lucky to have lasted 15 years with this condition as many die within a couple of years, but it doesn’t give you much comfort knowing I may not have the money to keep on receiving the treatment I may need in the future.

After the second plaque, I more or less had no vision in my left eye. The tumour was growing quite close to the optic nerve. My other eye is unaffected. When people are diagnosed with the disease they need to find an oncologist who knows about the disease. In New Zealand, the last patient the ophthalmologist had seen was a sheep farmer from up in the hills.

OculMel [a national ocular melanoma charity] has been a huge source of information and support. It was started by a woman whose father died of ocular melanoma. She had very little support because no one knew about the condition. She was determined that was not going to be the case for other people, so she started this charity.

I would like optometrists to be very aware of this condition. When I was diagnosed, I had never heard of ocular melanoma. I want to raise awareness of the disease itself and the fact that it can affect every part of your life and your family’s life. People should get eye tests on a regular basis and be aware of the possibility of having a tumour in your eye. I knew there was something wrong with my vision although I couldn’t put my finger on it. If you have any doubts that things are not right, you really need to go to an opticians.