Optometrist Donald Cameron has been made an Officer of the Order of the British Empire (OBE).

The Scottish optometrist was awarded the OBE in the New Year honours list in recognition for his services to eye care in Scotland.

Mr Cameron, who in 2014 was the recipient of the AOP Awards Lifetime Achievement accolade, has spent more than four decades in optics, and, as a founding member of Optometry Scotland, was pivotal in the development of how eye care in Scotland is delivered today.

Speaking about the award, Mr Cameron told OT: “It is a great honour to be recognised, but ultimately I am really pleased for optometry as it is not an area that gets recognised enough.

“You never achieve these things by yourself. I have been lucky to go through my professional life loving what I do, so to be recognised for doing something significant in this way is very flattering.” 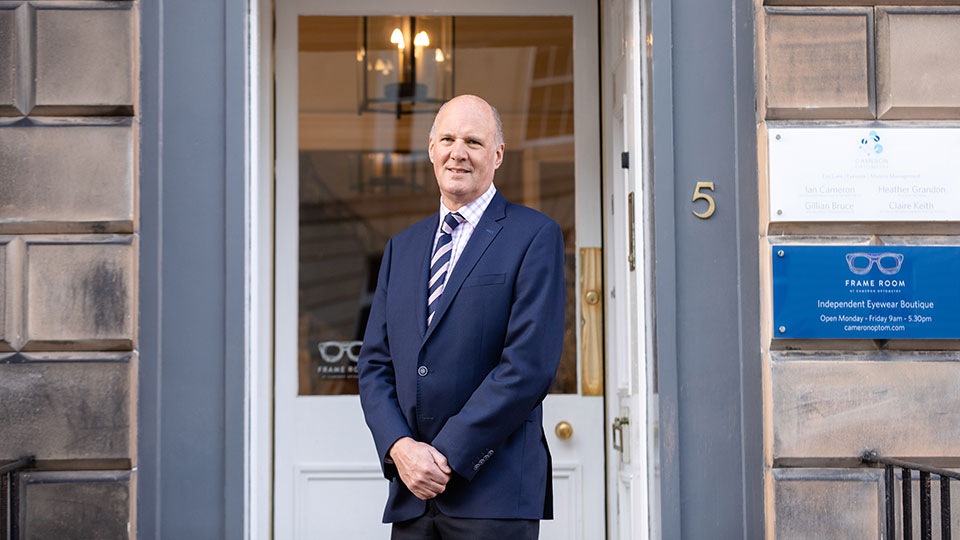 A career in optics

Growing up within an optical family, Mr Cameron never considered an alternative career, graduating with a BSc (Hons) in optometry from Glasgow Caledonian University in 1977.

After completing his pre-reg year at Murray McGrath in Edinburgh, Mr Cameron remained at the practice and in 1981 became a partner. As a growing and successful independent, in 2004 it moved to larger premises in Edinburgh’s city centre and was renamed Cameron Optometry. Today the practice, which is led by Mr Cameron’s son Ian, is the largest independent optometry and contact lens practice in Scotland.

As a practitioner, Mr Cameron admits that he “always wanted to be at the leading edge of everything.”

“We were one of the first practices to have everything from a fax machine to an OCT – I always wanted to have the best equipment and to provide the best eye care services that I could by whatever means,” he said.

It is this mindset that led to Mr Cameron’s involvement in eye care in Scotland at a political level, and ultimately transformed the way eye care is delivered in the country. During his time on the AOP council, for which he was chairman from 1999 to 2000, Mr Cameron met Scottish peers Frank Munro and Hal Rollason. The trio later together founded Optometry Scotland.

Optometry Scotland was established in order to develop and represent the views of the entire sector to the Scottish Government. In 2006, they were able to successfully negotiate a new General Ophthalmic Services contract for the country, which remains the envy of many practising outside of Scotland today.

Education at the forefront

As well as a focus on the delivery of eye care, Mr Cameron has driven forward the development of the scope of practice that optometrists can perform. In 2002 he was elected on to the General Optical Council’s council and began discussions for safe optometry prescribing of therapeutic drugs with UK Government. These discussions led to the establishment of an Independent Therapeutic Prescribing course at Glasgow Caledonian University, and in 2009 Mr Cameron was one of the first to gain this qualification and prescribe eye medication.

The same year, Mr Cameron was appointed programme director for optometry at NHS Education for Scotland (NES). Geared towards further advancing the post-graduate education of optometrists, the organisation encompassed nursing, medicine, dentistry and pharmacy, but did not feature optometry until Mr Cameron’s appointment.

Led by Mr Cameron, in 2014 the University of Edinburgh introduced an MSc in Primary Care Ophthalmology. Its success was evident and in 2015 the course won the Queen’s Award for Education (2015).