“Brass banding is a way of life” 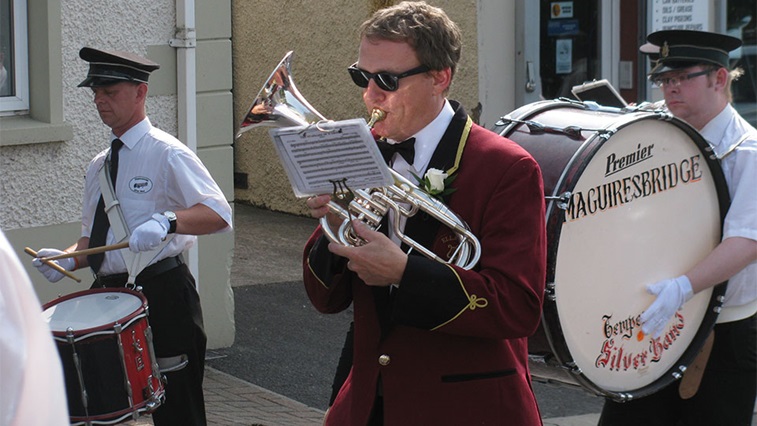 Brass banding is a of a way of life rather than a hobby. It gets addictive. My two girls and my wife Tracey [fellow optometrist and co-owner of Whitakers Opticians] play too.

When the girls were getting good enough to join a band after having lessons privately we looked for a band that had a good youth set up and Elland Silver Band ticked the box. My eldest daughter plays the tenor horn, my wife Tracey plays the cornet, and the youngest daughter is a cornet player.

If you compare it to football, when I joined the band 10years ago we were in about the third division, and we’ve gradually improved over the years. Now we are in what you might call the Premier League. We are not top of the league – we’re more like the Leicester Citys than the Manchester Uniteds – but we are in the championship section competing against the likes of the Brighouse and Rastrick Brass Band.

When I was at school, the local authority music services came around to my junior school with four brass instruments. They picked two boys and two girls out of the recorder group and I was fortunate enough to be one of them. I was given the tenor horn and I have stuck with it ever since.

I have always been happy with the tenor horn as an instrument. It is not quite as bright as the cornet and it is not quite as heavy to carry around as the tuba. It has a lovely pitch – not too shrill, not too low, it is a very mellow sounding instrument and good at playing slow melodies.

Comradery is a big thing in the band. We all go to the pub after rehearsals and we have a laugh about different things. There is a little bit of ribbing – the trombones are generally considered to be the naughty ones in the band and the ones that make the noise.

There is a whole range of ages in the band from younger players who have come through the youth band, right to players who are in their 60s and 70s. Quite often I get patients through brass banding. People know about my job and will come up to me if they are having problems seeing the music in front of them.

The 10-piece band that I play with played at mine and Tracey’s wedding. We have played at funerals as well. A lot of band people would like to have a band at their funeral. That can be quite emotional, certainly.

I enjoy the challenge of learning the pieces. It is one of the few branches of music where you actually compete. You have to practise them not just within the band, but at home too, so you make sure that you don’t let the team down. It is to do with stamina also. You produce the sound through your lips and your facial muscles. If you stop using them, it is like going for a jog when you have not been running for a week or two.

What makes a good brass band? Team spirit is the main thing, hard work and a good conductor. We have been quite fortunate over the 10 years that I have been at Elland to have two excellent conductors who have really driven the band and trained us well. Occasionally things do go wrong – someone will miss a note or something will happen – but you just carry on.