British artist and sculptor, Ben Taylor, was only the thirtieth patient to present at a specialist London hospital with a rare parasitic infection. He shares his experience with OT 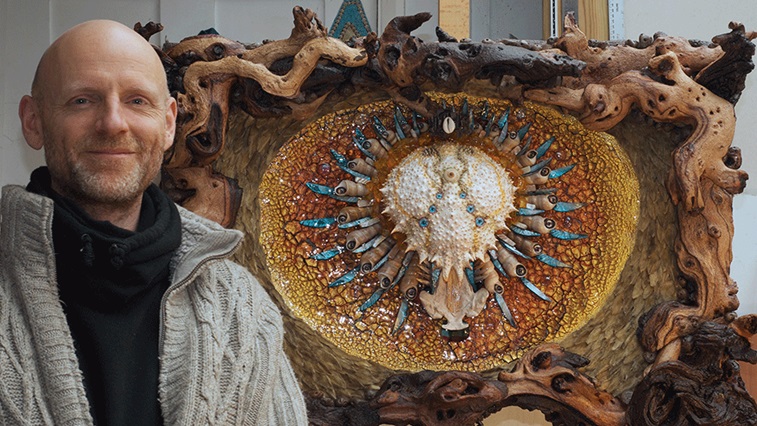 Over the years I have been a regular traveller to Gabon in central Africa. That is where I caught loa loa. I am pretty sure that is where it happened because another member of the party I was with also contracted it. He was number 29 in the history of London’s Hospital for Tropical Diseases and I was patient number 30.

About six months after I got back from the trip, the first symptoms started to present themselves. One particular day, I got up in the morning, looked in the mirror and there was a yellowy, whitish lump sticking out of the corner of my eye. I thought it might just be a sleep gunk but when I went to touch it I realised it was solid and that it was protruding from my eyeball.

While I was using the computer that morning, my eye started to go into spasm. I went to look in the mirror and the lump on the side had disappeared but there was a horse shoe shape sticking up from the bottom of my eye. I touched it and it wriggled along the surface. That was the moment I realised ‘I’ve got a worm in my eye.’

When I arrived at hospital, the head nurse gave me a telling off for being ridiculous. But then another nurse told her to look again and she saw something wriggling. That was when I met the eye surgeon. He decided to take it out there and then. 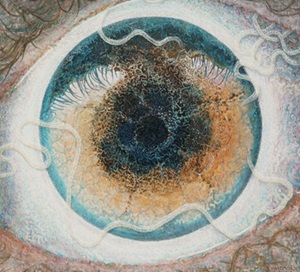 They put a dab of a cocaine derivative on the eye to numb it and then I had to do my best to look straight ahead while he made an incision with a scalpel, inserted some tweezers and pulled the worm out. They put the worm, which was about three centimetres long, in a little pot where it wriggled around for a couple of minutes before it died. Then it was sent off to London for observation.

I spent five days at the London Hospital for Tropical Diseases. While I was convalescing at home, I ended up pulling up this painting which I had put away upside down. It was an abstract piece that I had abandoned earlier as I didn’t feel like I was getting anywhere with it. As I pulled it out, the penny dropped that what I had been constructing was the shape and look of an eyeball. It was only after I realised that connection that I re-did the painting adding in the eyelashes and the worms themselves.

I had to do my best to look straight ahead while he made an incision with a scalpel, inserted some tweezers and pulled the worm out

Out of the blue, I received a message from Byron [Breedlove, managing editor of Emerging Infectious Diseases]. He said that he had been trawling the internet for artwork that may be suitable to the content of the month’s journal focusing on parasites and tropical diseases. He found my artwork and wanted to use it. For some reason, this story caught the imagination of quite a few people.

My health is fine now. It took a lot longer than expected for my health to balance out and my immune system to come back properly. The vision side of things was quite minimal. When I realised that there had been quite large worms moving within my eyeball, I thought it would have done some permanent damage. But my vision has gone back to me being as short-sighted as I ever was.