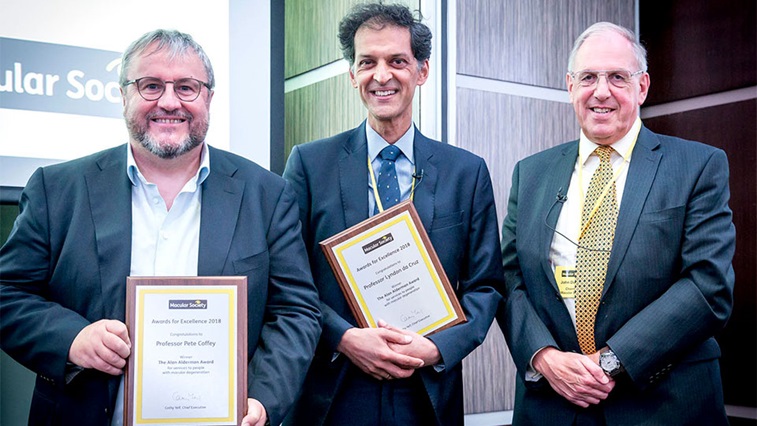 Professors Pete Coffey and Lyndon de Cruz (pictured above left and centre) have been named the joint recipients of the Macular Society’s Alan Alderman Award.

The highest accolade to be awarded at the charity’s annual Awards for Excellence, it recognises ‘exceptional service to people with macular conditions and the charity over a significant period of time.’

The accolade was given to the pair in recognition of their work at the London Project to Cure Blindness, which the charity said was pioneering.

The professors led on a trial, partly funded by the Macular Society, which saw new retinal pigment cells injected into the eye to patch the damage of two patients with significant sight loss for wet age-related macular degeneration. After 12 months, one patient, who had previously been unable to read could read 47 words per minute. The other improved from two words to 80 words per minute.

Professor Coffey has worked in the ophthalmology sector for more than 40 years and has been director of the London Project to Cure Blindness since it was established in 2007.

Speaking about the accolade, Professor Coffey said: “When we were told that we’d won this award, it came completely out of the blue. It’s a great honour personally, but it’s also excellent recognition for the London Project and the work of everyone that’s been involved in it for the past 11 years.”

Professor da Cruz, who is a consultant retinal surgeon at Moorfields Eye, has been collaborating on the London Project since it began.

He added: “It’s rare that a scientist gets to achieve the results we have as part of the London Project, so that alone is exceptionally rewarding. But it really does mean a lot to receive compliments for the work that you do, so we’re delighted to have been chosen for this award.”