I spent the two-week trip in Mullaitivu, a small town in the north-east of the country that was destroyed by the 2004 tsunami and later hit by the civil war before it had a chance to fully recover.

My first three days had been planned out in advance and I would hold eye care clinics at a nearby local hospital.

I learned early on in the planning stages of my trip that performing voluntary work on my own would be a lot more demanding than working alongside an organisation on a number of levels. Thankfully, I was supported by a local doctor in the hospital who allocated staff to help select and screen patients from across the district.

Their selection was based on unaided Snellen visual acuity and patients with visions worse than 6/18 were advised to attend the clinic.

The doctor was a general practitioner and had little knowledge about the eyes. However, she had been transferred to the district’s hospital to compensate for the lack of eye services that had been available for the last seven years.

Prior to arriving in Mullaitivu, I had packed up and sent off the frames that I would require during my trip and they were at the hospital on my arrival. The frames had kindly been donated by the director of Boots Opticians in Stevenage, Rita Khagram.

I was allocated a room within the hospital to work from. It had basic equipment installed, including an ancient slit lamp with questionable wiring.

Planning for the worst-case scenario meant that I took my own equipment and test chart to Sri Lanka with me. 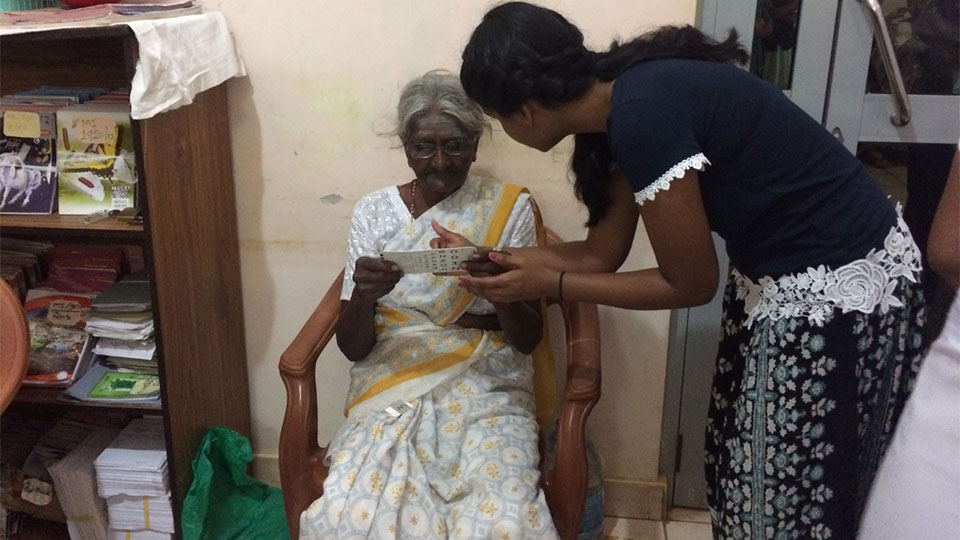 On the first day, patients began arriving at 7am. They were holding small numbered tokens as they awaited eagerly to be seen.

My morning was spent providing a quick learning session on using Kay pictures to the supporting staff.

Then, one-by-one patients were called in. Each patient sat and confessed their visual problems to me. Fundal examinations, visual acuity and retinoscopy were conducted, and, when required, a prescription was written out and the individual was directed towards a table containing frames to choose from. Measurements were taken and then the frames were put aside.

The patient left with the promise that their glasses would be ready for them the following week.

Each patient sat and confessed their visual problems to me. Fundal examinations, visual acuity and retinoscopy were conducted, and, when required, a prescription was written out and the individual was directed towards a table containing frames to choose from

Word soon spread across the district of the eye care services that I was offering in the hospital and more and more people queued outside hoping to have their eyes tested.

After three days the clinics came to a close. Carrier bags were filled with the frames and dispense slips, which were then driven to a nearby town where a local optician had offered to glaze the frames for a small fee.

However, due to limited machinery, many of the frames were later dispatched to Colombo, the capital city, where the bulk of the reglazing was completed.

The final days of my trip were spent recalling patients back for the fitting of the glasses. On collection a quick vision check was performed and general advice on how to look after the eyes was given.

Overall, I saw 124 patients during my trip, the majority of which were over the age of 65. Several had dense cataracts that required surgery, but they declined simply due to the long distances that they would be required to travel. Other pathology I saw included glaucoma, dry macula degeneration and corneal infections.

A total of 100 glasses were dispensed.

Despite spending several years performing eye tests in the UK, the two weeks that I spent in the small town of Mullaitivu was enlightening in many ways. I felt rewarded by the smiles I received, and the sheer delight at how well they could see.

The majority of the individuals who I saw performed manual jobs and had livelihoods. In most cases, they were the only working member of the family and heavily depended on the quality of their eyesight.

The trip gave me a sense of appreciation for my own life and sparked the urge to complete voluntary trips like this in the future.