“When dad went for his appointment at the hospital, they investigated and found papilledema”

The Outside Clinic optometrist, Jaclyn Fortune, and her patient’s daughter, Christine Lees, talk about the referral process after identifying bleeding at the back of both eyes 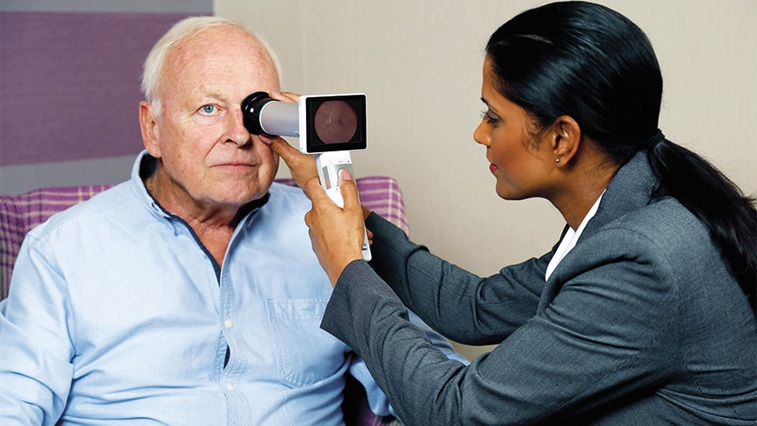 Before your father had a sight test, had he experienced any symptoms and how had this affected him in day-to-day life?

Christine Lees (CL): Dad had said that he could see lines behind his eyes, especially when he closed them, and this was gradually getting worse. We knew something was wrong because he was losing his balance when he was walking, he was falling down and couldn’t get back up. He stopped driving to be on the safe side, he couldn’t think clearly and he couldn’t have normal conversations or make everyday decisions, such as what he would like to eat.

What did the optometrist find, and how did they explain the next steps?

CL: His optometrist, Jaclyn Fortune, could see that the health of his eyes wasn’t as it should have been. She explained that he had bleeds behind his eyes and they were worried something serious could be causing this. But at the time, it was not clear what that could be. Jaclyn knew it needed to be investigated. Dad was referred to our local hospital’s ophthalmology department. She said he needed an urgent appointment.

What was the referral process and did your father have to undergo any further treatment?

CL: When dad went for his appointment at the hospital, they investigated and found papilledema. They said that the swelling was so intense and they had never seen it at that size. They admitted dad to a ward for further investigations. They took his blood, did various tests and a brain scan. When the results came back, it showed that dad had fluid on his brain. It had built up and pressed on various parts of his brain, which was the reason for the pressure behind dad’s eyes, along with all of the other symptoms – the unclear decision making, the reduction in mobility and also his falls. They transferred him to Sheffield Hospital to see a specialist and they fitted him with a stent in his brain. This was last October.

CL: Dad is a completely different person. He is now back to the dad we know. His mobility has returned, he is driving again and he is clear headed. The falls have stopped. Everything is now returning back to normal. He is under Barnsley Hospital’s care for check-ups but the swelling and the bleeds are repairing over time. We asked what the outcome could have been if we hadn’t caught this at the time and we were told that he would certainly have lost his sight. Dad has now got his life back and his independence. He is thrilled at the outcome.

Have your views, and your father’s views, on the importance of sight tests and eye care changed as a result of this experience?

CL: We have all always had eye checks every two years. Without this sight test we wouldn’t have found out and rectified what was wrong. He was very lucky. We had booked dad in for an audiology appointment to check his hearing, a sight test to check his sight and also an appointment for his feet because of his balance. As soon as the sight test was done, things moved quickly.

"Dad is a completely different person. He is now back to the dad we know. His mobility has returned, he is driving again and he is clear headed. The falls have stopped. Everything is now returning back to normal"

Jaclyn Fortune (JF): When I visited the patient in his own home, he was fairly asymptomatic and just wanted new glasses. A gradual deterioration in vision was reported. There was no pain, headaches, visual field loss, flashes, floaters, diplopia etc. Visual acuities were not significantly reduced for a 75 year old man. Ophthalmoscopy revealed multiple haemorrhages and the disc edges looked indistinct. I decided to dilate for a better view where I could see the extent of retinal haemorrhaging bilaterally and both optic nerve heads looked very swollen. I immediately thought this man is not well. I thought that he could have a brain tumour and that he required urgent hospital attention.

JF: I remained calm while trying to discuss the severity of what I had found, without distressing the patient. It was difficult as he kept asking just to have new glasses. I said I had seen some bleeding at the back of both eyes and that his optic nerves looked a little swollen. I told him that an ophthalmologist really needed to examine him as soon as possible.

JF: I called our head office where our clinical services team are able to process urgent referrals for me as I am out on the road for home visits. I advised them of the details, emailed my datafile with the referral attached and they were able to arrange for the gentleman to attend hospital urgently. I believe the speed at which he was seen by the hospital doctors saved his life.

What are your three top tips to other practitioners when making a referral?

JF: 1. Highlight why you are referring so appropriate channels are used

2. Give as much relevant detail in a clear concise manner and attach pictures if possible

3. Specify the urgency of the referral you require so urgent cases like mine are not missed.