As a workforce, optometrists are more likely to be balancing work and childcare commitments than in the past. OT  delves into the trend

Why is it important to meet the needs of working parents? If nothing else, the answer lies in the numbers. The latest AOP research shows that 37% of optometrists have childcare responsibilities.

The General Ophthalmic Workforce survey, produced annually by NHS Digital and published in March, shows that 54.4% of ophthalmic practitioners in the UK are women. This compares to the 2007 breakdown of 56.1% male and 43.9% female.

Alongside these trends, men are also taking on more childcare responsibilities than in the past.

ONS analysis highlights that between 1997 and 2017, the proportion of fathers with a toddler who worked part-time almost doubled from 3.9% to 6.9%.

Optometrists Ed and Rachel Adkins (pictured below) run a small independent practice, Adkins Opticians, in the rural market town of Diss in Norfolk.

Rachel told OT: “Being our own bosses has given us the ability to allow time for family commitments as and when required. Because we are both optometrists, we have more flexibility for covering clinics and inevitable staff shortages when they happen. We can cover any role and having teenagers around has made life somewhat easier if we need to work later.”

The pair employ a child-minder for Iris to give them some additional flexibility for Rachel to work. 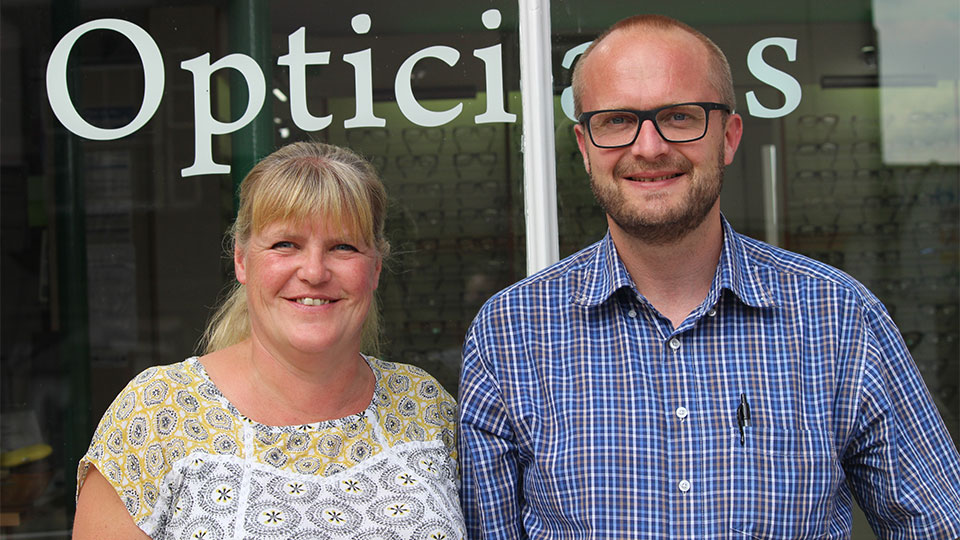 Ed said one of the challenges of being a parent and an optometrist is meeting continuing education and training (CET) requirements.

“These have inevitably involved some evening CET meetings and occasional weekend courses and trade shows. We have had to take advantage of grandparents at times,” he added.

In terms of changes within the profession that would make it easier for working parents, Ed would like to see a relaxation of CET requirements for those on maternity leave and additional help towards early years childcare.

“I think otherwise the profession caters well for working parents,” he noted.

Rachel shared that while she loves motherhood, she also values having time for herself and developing her career.

“It’s easy to become isolated as a parent, so I very much enjoy the social interaction that I get from being at work,” she emphasised.

The pair believe that being parents as well as business owners has made them more sympathetic to the needs of staff with children and also meant that they are more accommodating to patients who are also parents.

“Ensuring availability for child appointments after school, at weekends and in school holidays is very important,” Rachel observed.

Ed shared that finding a balance between family and work life is important.

“Initially, it was difficult to let go of certain aspects of running the business, but becoming more organised and informed over time has taught us to ensure lots of quality family time is available,” Ed said.

“After all, general wellbeing and happiness is important to be successful in business, as well as out of it,” he concluded.

More on a diverse workforce