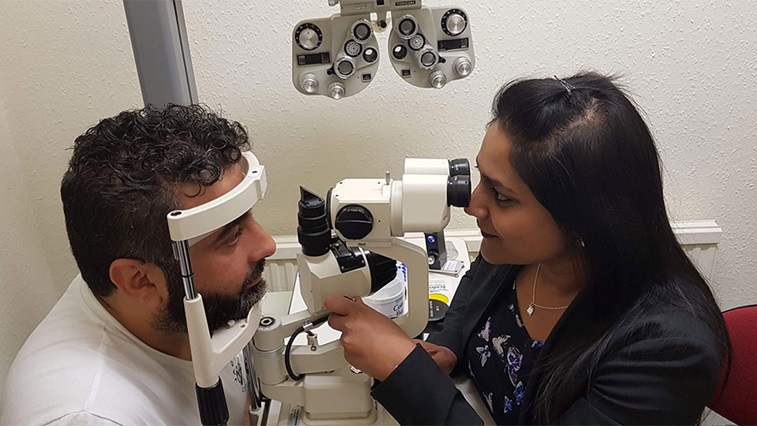 Zamil Munshi (ZM): I noticed a significant change in the vision of my left eye; it had become considerably blurred. Overall, my day-to-day life continued as usual and these symptoms did not prevent me from continuing with any activities.

ZM: During my eye test, my optometrist, Nazmeen Ahmed, discovered that I had fluid in my left eye and that several blood vessels had been ruptured. She then told me that she would refer me to the hospital and that she would try to get me seen urgently.

ZM: Before I was able to attend my appointment at the hospital for my eyes, I saw my GP, who checked my blood pressure during a routine check-up. She discovered that it was dangerously high and sent me to hospital straight away. I was then admitted to hospital and stayed for 11 days due to high blood pressure.

During this time, I attended the eye clinic in the hospital for my check. They informed me that the fluid and haemorrhaging in the eye was all caused by the high blood pressure. In the end, I did not undergo further treatment for this as the fluid in my eye drained itself and my vision has since been restored. However, I am still attending the eye clinic at the Royal Blackburn Hospital as they continue to monitor my eye.

ZM: In general, my overall health and wellbeing has improved and I am taking medication to keep my blood pressure under control. As a result, any discomfort that I was feeling has now gone.

Coming out of this, I would now make an appointment at the GP (or opticians) as soon as I feel any changes in health. This is because I realise the importance of regular health checks, such as eye tests, as they can detect a multitude of serious underlying health issues.

Nazmeen Ahmed (NA): Mr Munshi attended his first ever sight test on a Saturday lunchtime. I took a full history and noted his symptoms – his only complaint was that the vision in his left eye hadn’t been as clear as normal over the previous few weeks.

At this point I was slightly bewildered and again asked Mr Munshi of any symptoms. However, there were no headaches, no asthenia, no recent loss of weight, no dyspnea and no visual disturbances. I asked Mr Munshi when he last had his blood pressure checked and he advised me that he was due to have a check the following Monday.

NA: I was all too aware that this was Mr Munshi’s first sight test and, at worst, he would have been thinking the outcome would be that he might need to wear glasses. So, I was very sensitive as to how I explained what I was suspecting.

I advised Mr Munshi that the reason he was struggling with his vision was not because he needed glasses but that it was most likely due to his blood pressure being high. I told him calmly that there were signs at the back of his eyes which strongly suggested his blood pressure was high and needed urgent attention. Mr Munshi was very calm, which helped the matter greatly.

NA: I spoke with an on-call ophthalmologist and explained all of the signs. He advised me to send an urgent referral, which would be triaged within two hours. Mr Munshi was made aware of this procedure and I advised him to have his blood pressure checked ASAP. I reassured him that he could contact me if he wanted any further information.

"Always remain calm. It is so important to show composure when delivering quite frightening news. Be confident but have empathy in your tone. This makes all the difference in how a patient reacts to the news"

How does this case highlight the importance of sight tests?

NA: The importance of regular sight tests cannot be stressed enough. In Mr Munshi’s case, a healthy young man was going about his daily life totally oblivious of his possibly life-threatening hypertension which showed up through a routine eye test and the invaluable OCT scan available at our practice. I strongly recommend OCT to all my patients.

The management of malignant hypertension is considered a medical emergency, which highlights the significance of an urgent referral in this case. Rapid intervention is required as it has been shown that there is a strong association of the condition with clinical stroke, cognitive decline and cardiovascular mortality.

What would be your three top tips to other practitioners when making an urgent referral?

NA: 1. Always remain calm. It is so important to show composure when delivering quite frightening news. Be confident but have empathy in your tone. This makes all the difference in how a patient reacts to the news

2. Be fully aware of the referral pathways in your area. This in turn will help you to remain calm and assess the situation effectively. This is particularly important to locum practitioners who move around as there may be different protocols on weekdays compared to weekends, as is the case in my area

3. Use all the resources at your disposal. This will help you make the right clinical decision for your patient, be it a dilation, fundus images, OCT scan, visual fields or phoning the ophthalmologist. Don’t be afraid to look through your pathology literature to assist you in deciding what the condition is. Sometimes you may not know what the condition is, which is ok as long as you have done all the necessary tests and can accurately describe what it is that you’re seeing. An ophthalmologist can then advise you on the next steps to take.