Optometrist at Waterloo Eye Centre, Cortney Melia, and her 22-year-old patient Josh Lovett, discuss how being convinced to have a sight test led to the detection of a sight threatening tumour 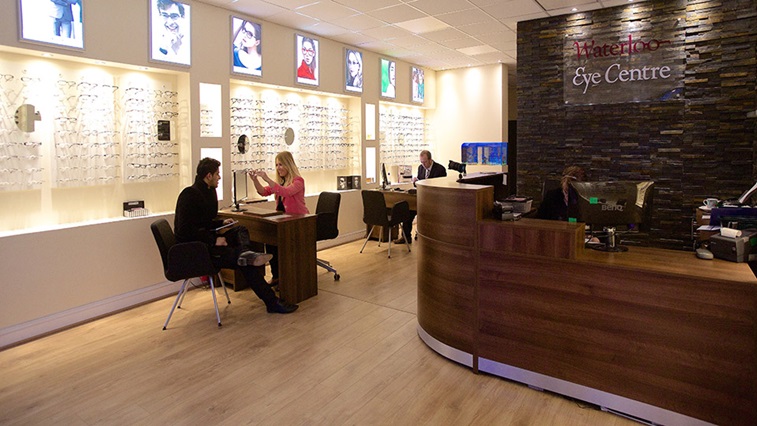 Josh (JL): I’d developed an eczema like rash underneath my eyelashes and was having occasional zig zags in my vision, which I thought were migraines. My mum is a regular patient at Waterloo Eye Centre and suggested we pop in to ask for advice.

The optometrist, Cortney Melia, explained that it would be best to have a full eye examination and booked me in for her evening clinic, so that both me and my mum could attend. I had drops put in and it was explained that this was to dilate my pupils and get a clearer look. It turned out that I had papilloedema.

JL: I think I was in a bit of shock as I’d honestly thought the worst case would be being told I needed glasses or an eye cream. Even at A&E, I didn’t realise how serious things were. I think my mum was a lot more worried than I was, because she maybe realised before me that there could be a serious problem. Cortney made sure we knew we had to be seen the same day but did it in a way so that I wasn’t panicking and scared to go.

JL: Within 36 hours of my appointment at Waterloo Eye Centre, I underwent a 14-hour operation to remove a tumour. The initial scans had shown it to be the size of a walnut but when it was removed it was the size of a tennis ball and had likely been silently growing for years. The consultants were amazed I wasn’t showing symptoms or getting headaches.

What has the outcome been?

JL: I had surgery on my brain, which was terrifying for myself and my whole family. We really hadn’t foreseen anything like this. My parents have taken time off work to look after me and it’s not even worth thinking about what would have happened if Cortney hadn’t acted so promptly.

How have your views on the importance of sight tests and eye care changed as a result of this experience?

JL: Really, I’d wanted advice on the eczema like rash around my eyes rather than a sight test, but Cortney convinced me to have a full eye examination. I’m just so glad that Cortney carried out the thorough test she did because I wasn’t convinced I needed one.

There is still a long road to full recovery, I’ll be under the hospital’s care regularly for a long time. It will also take a long time for the scar to heal well enough for my hair to start growing back and my journey to studying and working has been halted for now. This experience has saved my life and given me and my family a future together.

"Within 36 hours of my appointment at Waterloo Eye Centre, I underwent a 14-hour operation to remove a tumour"

Cortney Melia (CM): Josh’s vision was good and there was no underlying prescription to explain any visual symptoms. A slit lamp assessment showed extensive papilloedema, more severe than I would expect based on Josh’s very mild symptoms.

I performed a visual fields assessment, which showed extended blind spots and dilated to investigate further. Josh had bilateral papilloedema with haemorrhaging. I was honestly amazed his visions were so good and that he wasn’t experiencing headaches. It has made me realise the importance of listening to every niggle a patient feels they need to mention as not all cases of life threatening conditions present as seriously as the textbooks will tell you.

CM: I explained to Josh that I was concerned by some of the findings of our examination and, knowing that Josh had believed he was attending for a pretty routine examination, asked if he would be okay with me explaining the next steps to both him and his mum. I explained that the findings suggested his occasional visual disturbances may be caused by a more serious matter and since it was out of hours and we always want to air on the side of caution, it was best if they attended A&E immediately. I explained that it would be most beneficial if Josh had a head scan as soon as possible to identify the severity of the cause of the swelling.

CM: Fortunately, I’d booked Josh into my evening clinic in case I’d needed to dilate for the appointment, so he had attended with his mum and wasn’t alone. I asked Josh if we could go over the next steps with his mum included so he had some support to hand. I didn’t want to panic either of them but needed to make sure they attended hospital immediately.

Understandably they both had questions, I explained it wasn’t my place to give a diagnosis but from what I could see at Josh’s optic nerve we needed not to delay any investigation and get the right medical professionals looking after Josh.

When did you hear about the result of your referral and how have you been involved since?

CM: Josh’s mum called into the practice a couple of days later as I’d asked them to keep in touch. She passed on hers and Josh’s thanks and told me how he had been rushed through A&E on the back of my referral letter and had been seen and admitted very quickly. Josh had life-saving brain surgery to remove a large tumour within 36 hours of attending for what he thought was a routine eye examination.

Since then, I have checked in with Josh and his family periodically and am delighted to hear that Josh is almost fully back to his humorous self. The whole family has since been in for routine examinations as the experience has highlighted how important getting your eyes tested really is, even if you don’t think you’re having problems. They’ve all left with a clean bill of health, which is fantastic.

What would be your three tips to other practitioners when making a referral?

CM: 1. If the referral is serious, and your patient has attended with a friend or family member, ask if they’d be okay with you explaining the next steps with them both. The patient being referred may be too worried or shocked to take in fully what you are saying

2. Always make sure your patient understands how quickly you want them to be seen and ask them to check in with you once they have been seen. This allows you to follow their case through and means they know not to delay as you’re keen to hear about their outcome

3. Make your findings, the urgency of which you think your patient needs to be seen, and the department you are referring to clear on your referral. Taking out the guesswork for your fellow medical professionals allows for the promptest care for your patient, especially in emergency cases.