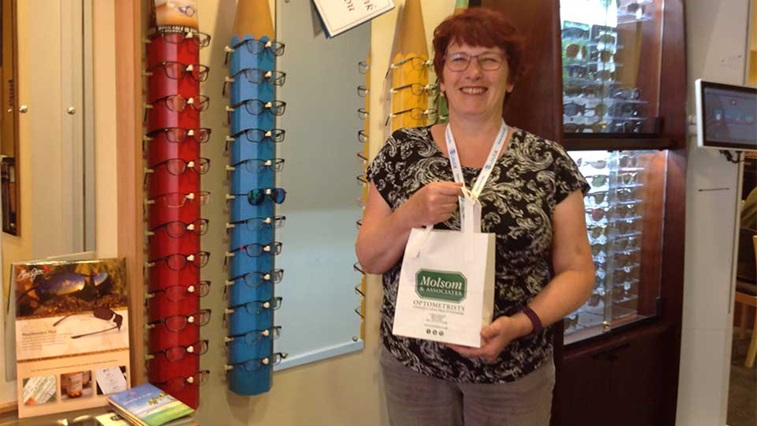 Georgina Harrison (GH): About eight months before the diagnosis, I experienced flashing lights. I’d driven to the local shopping centre and realised I couldn’t really see. I wasn’t sure how I was going to get to work later. I calmed myself down and after what felt like ages, but was probably only 10 minutes, my eyesight went back to normal. I get floaters and what I call sparkle flies a lot.

I got a part-time job a month or two before the diagnosis and had difficulties looking at the till. Sometimes I could see it and sometimes I couldn’t. I just thought I was being dim-witted. Other than that, I just felt tired all the time.

GH: When I went to see my optometrist, he could see something there. When he covered my left eye and I was looking at the letters on the wall with my right eye, I couldn’t see much.

He said that he’d noticed an anomaly and wanted to do a scan. When he showed the scan to me, around the retina it looked like there was a blob. He said he would get me booked in for a referral at the Pilgrim Hospital eye department in Boston in Lincolnshire and they’d take it from there.

He didn’t frighten me by mentioning that it could be a tumour, but he said that time was of the essence. I think I struck gold with Mr Price because he has a very gentle nature and was exactly the right sort of person with the right bedside manner.

GH: After Boston, I went to hospitals in Nottingham and then Sheffield. At Sheffield, they asked if I had any idea what I had and I didn’t really know. They said, ‘Unfortunately, we’ve found a tumour.’ They then explained that proton beam therapy would be the best treatment. I sort of knew there was the possibility of cancer, but I thought ‘let’s just get it treated.’ I have to have two body scans every year for the rest of my life because it travels through the blood stream and could spread.

GH: I knew about glaucoma and cataract previously, but I really didn’t know anything about ocular melanoma until they said that’s what I had. I would recommend everyone have an eye test. It’s absolutely paramount. Even if they think they’re going to feel silly, just go and get it checked out.

GH: It’s helped me put things into perspective. I’ve had to slow down a bit and ask myself what I really want. I’ve started jogging again and recently did a fun run for Cancer Research UK. I was a nurse and am hopefully going back to it in September. Rather than working in a really busy vascular ward, I’ve decided to go into community nursing.

Ian Price (IP): Georgina presented in January 2018 reporting ‘hazy’ vision in her right eye, which she had noticed for about a year. The eye exam revealed a swelling on the right eye retina extending from the macula to the temporal retinal periphery. This was confirmed using optical coherence tomography (OCT). The right eye acuity was found to be poor at 6/60.

How did you explain what you had found and what were your next steps?

IP: I explained to Georgina that the retinal swelling appeared to account for the poor right vision and that an urgent, but not emergency, review of the retina would be required by an ophthalmologist. I then phoned the local eye hospital department and explained the situation and they agreed to see the patient the next day.

IP: It was several months later that the patient contacted the practice to say that following the referral, ocular melanoma had been diagnosed. Subsequently she had undergone proton beam treatment and was being monitored by the Royal Hallamshire Hospital. In June, I re-examined the patient and she thanked me for possibly saving her life. I was surprised at how calmly Georgina had processed the fact that although the tumour was being treated, the vision for her right eye is irreversibly poor. In fact, she seemed incredibly upbeat about the whole situation.

What are your three top tips for making a referral?

IP: 1. If you have access to OCT technology, make use of it
2. It is important to impress upon a patient the potential seriousness of a referral without giving them cause for undue anxiety. In this case, it was important that the patient grasped the potential gravity of the situation when I originally referred her, without causing her undue alarm. At that stage, I only suspected melanoma and could not verify what it was
3. If in doubt about the urgency of a referral or the nature of what you are referring the patient for, phone the local ophthalmology department for advice.