OT  talks with optometrist, Lyn Price, about the exhilaration and exhaustion of horse driving trials

When I first became involved in horse driving trials, I drove a pony we bought off a traveller in my early twenties. I competed at the inception of the sport in the late 1970s, then I took a break when I was 26 due to some life changes and studied optometry at City University.

Horse driving trials is one of the very few sports where people of all ages, from eight to 80 plus, can compete on equal terms. There is no gender advantage. A lot of couples compete as it is the only equestrian sport two people can enjoy. One person drives while the other is the backstepper – keeping time, navigating and acting as ballast to keep the wheels on the ground. The driver, backstepper and horses must work in unison in order to be successful.

It is run in three parts usually over two or three days. During this time we “live” on the horse lorry with the horses camped in pens beside us. The competition consists of dressage which is a series of shapes driven in a specific order in an arena at different paces. The complexity of movement increases through class progression.

The second is the cross-country phase which starts with around 12-16 kilometres of tracks driven at a reasonably fast pace. There is then a compulsory halt for 10 minutes for getting everyone’s heartbeat and temperature down to an acceptable level to continue. 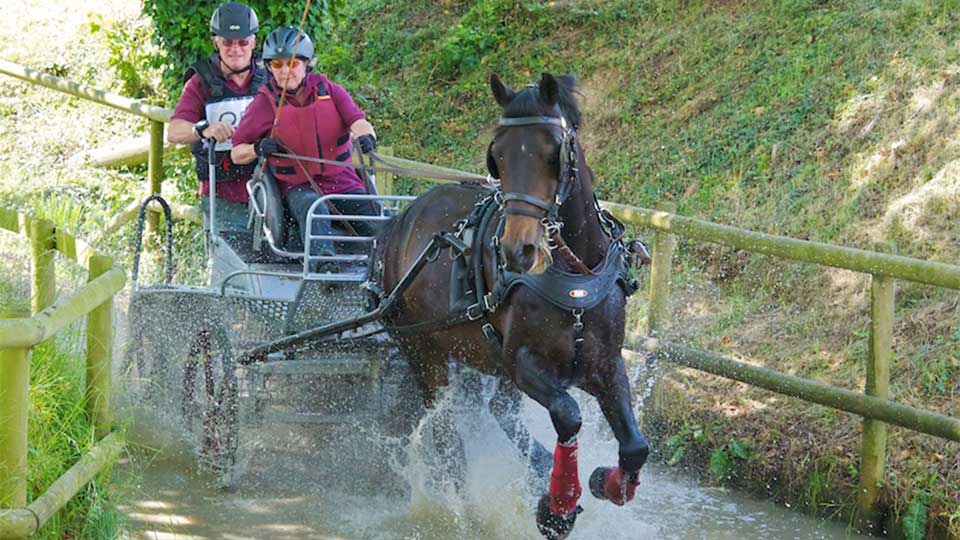 On hot days this involves throwing large quantities of water over the horses to cool them down and on chilly days we use rugs to keep their large muscles from cramping.  We give our horses electrolytes at this stage and may change the studs in their shoes to grip the ground better depending on the conditions. We then navigate through six to eight obstacles within a further 12 or so kilometres.

It is a privilege to drive on some of the most beautiful estates in the country where the competitions are held. At Sandringham there was a little bit of manicured lawn we had to cross so they placed a huge piece of carpet down so the horses’ hooves and carriage wheels didn’t make marks.

Prince Philip started the sport in the UK and was instrumental in its development. He was looking for a sport after he retired from polo and discovered horse driving trials on continental Europe. Prince Philip personally started competitive driving using the Queen’s horses who were unfazed with everything until they encountered some cows which you don’t see when on ceremonial duties in the streets of London.

To be good at the sport you need controlled focus, tenacity, nerves of steel as well as empathy and rapport with the horses. Stamina, good spatial memory, quick thinking and implicit trust with your backstepper are also essential. Horse driving trials is exhilarating and exhausting with no time to think about life as an optometrist. You have to practise like you’ve never won; perform like you’ve never lost.