Optometrist, Martin Smith, and his patient, Alan Scott, share how a routine sight test led to the diagnosis of lymphoma 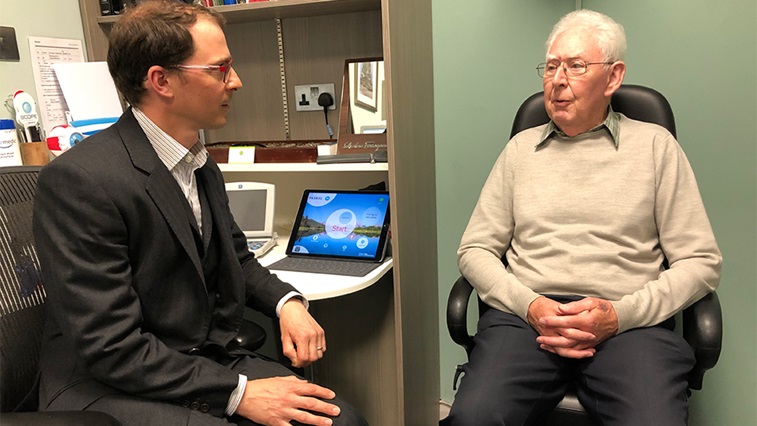 What prompted you to go for a sight test, and what did the optometrist find?

Alan Scott (AS): It was time for my routine annual eye test. There was something Martin wanted investigating with an ophthalmic surgeon and I immediately agreed to a referral. As I had not noticed anything wrong I was very pleased that a potential problem had been detected by my optometrist at what I believed was an early stage.

AS: My initial appointment was with the ophthalmic consultant at the hospital. He arranged for a biopsy from the conjunctiva of my right eye as he was suspicious of a possible conjunctival lymphoma with secondary entropion right eye.

In addition to referring me to the hospital's haematology unit the ophthalmology consultant carried out an operation on the lower eye skin because it was starting to turn in towards the eye. He also arranged for an IVRI scan. I then had further appointments with the haematology consultant where blood samples were taken on a regular basis. When the various results were known I was referred to the oncology clinic where I underwent a course of 12 treatments of radiotherapy.

AS: If Martin had not noticed the problem then the disease could have spread, affecting my eyesight and the lymphoma spreading to further parts of my body.

Martin Smith (MS): Although the patient was asymptomatic, slit lamp examination showed a right entropion. On everting the lid, I could see that all round the globe the conjunctiva was abnormal and that the entropion was secondary to this abnormal conjunctival mass. Comparison with the photographs taken the previous year showed that this was a new lesion.

MS: My reaction was that this was likely to be a conjunctival tumour. It was clear that this required further investigation to identify the precise nature of the lesion and whether it was benign or not.

How do you approach explaining what you had identified/suspected?

MS: I explained to the patient that his eyelid was turning in, and that this appeared to be secondary to an abnormality in his conjunctiva which required further investigation by an ophthalmologist.

What were the next steps that you took, and can you explain the importance these steps were to this case?

MS: The next step I took was to email the pictures to the oculoplastic surgeon at the local hospital eye department. He agreed with my initial diagnosis of a conjunctival tumour and suspected a lymphoma. The patient was booked in to the hospital eye services urgently and lymphoma was confirmed by biopsy.

How have you been involved in the process since the sight test?

MS: This gentleman returned to us for his routine test recently, with the happy news that the lymphoma had not spread and had been effectively treated with radiotherapy. His lid position has returned to normal following surgery to correct the entropion. He has always been conscientious about attending for his routine sight tests and recognised that on this occasion without the test this lymphoma may have been picked up later with more serious consequences.

MS: 1) Always consider what your differential diagnosis might be of any abnormality. A small chance that something is serious is worth investigating, even if it is unlikely. Rare things do happen, for example the incidence of conjunctival lymphoma is only 2-4/1,000,000 so it won’t crop up very often

2) Good relationships with the local consultants and other eye specialists can be very helpful in making sure the patient is directed to the correct pathway. A second opinion is always useful as pathology, which is rare in primary practice, may be more familiar to an ophthalmologist who sees every case in a wide area

3) Record keeping. Document, take pictures, do optical coherence tomography scans and write it down. The more information you gather the more likely it is that you will arrive at the correct diagnosis. If you are referring, it is always good to provide the essential information in detail, but don’t include lots of irrelevant information.