Hoya lenses effective in managing myopia at three-year follow up

Optometry students at Anglia Ruskin University and City, University of London have jointly raised more than £2750 for Vision Care for Homeless People (VCHP).

The undergraduates fundraised as part of an inter-university competition, the Optoversity Challenge.

Held for a second consecutive year, the competition was organised by Out of the Box Optics and took place at Anglia Ruskin’s eye clinic on 28 April.

The event is designed to be a fun and effective way of helping third year optometry students prepare for their pre-reg year, whilst also encouraging them to network with their peers.

The day featured an ocular disease picture quiz and a general optometry multiple choice quiz, followed by a round of preparatory objective structured clinical examinations (OSCE) stations that put students in scenarios that they may find themselves in during their pre-reg year. 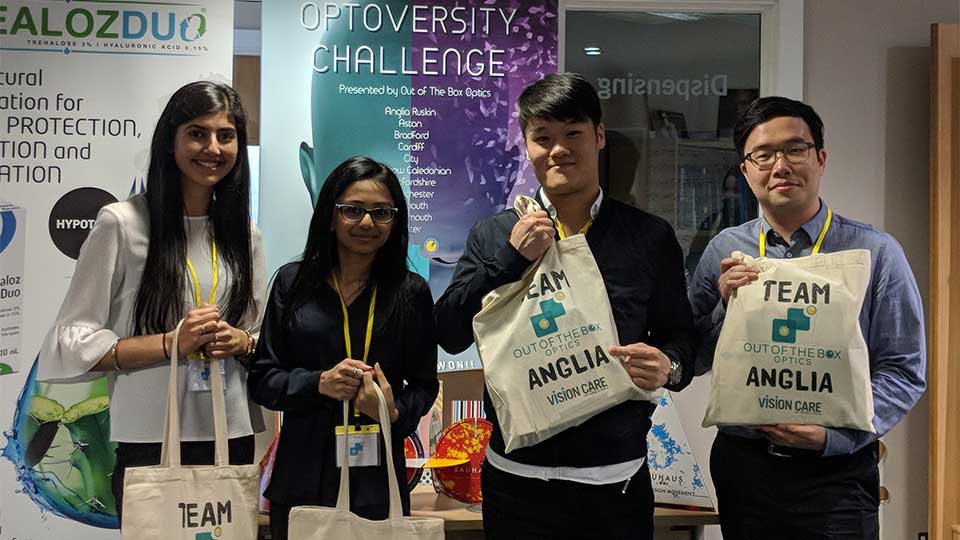 In the afternoon a second round of OSCE stations was followed by a presentation on the work of VCHP by optometrist Gajan Singh and a careers talk from hospital optometrist and Anglia Ruskin clinic supervisor, Karmelo Modina, both of whom are part of Out of the Box Optics.

The day concluded with an interactive game of Optometry Articulate, with City students winning the overall competition.

The day was supported by a range of industry companies who donated prizes.

City’s Jagriti Jyoti won an iPad sponsored by Zeiss Vision, while each student in the winning team will receive a frame from Henry Beaumont Eyewear.

Other prizes were donated by Modo Eyewear, CooperVision, Thea Pharmaceuticals and Keeler.

For more information on Out of the Box Optics, visit its website.