“Nine years on and I love life”

Optometrist and owner of Tompkins Knight and Son, Brian Tompkins, and his patient, Rosemary Harries, tell OT  about how a routine eye examination allowed Rosemary to watch her grandchildren grow up 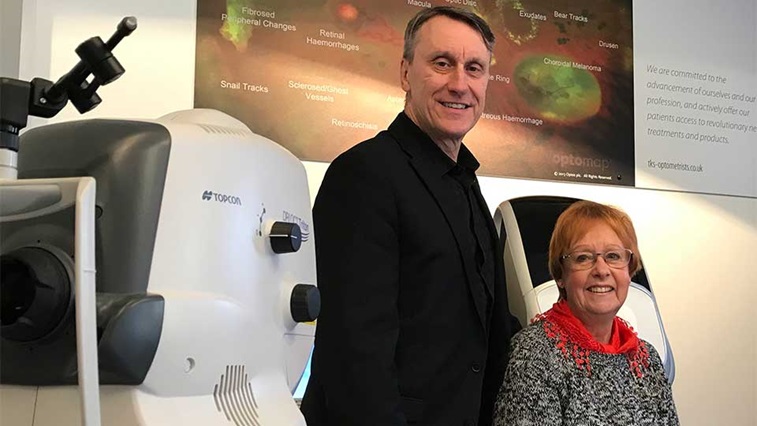 What happened when you went for an eye examination?

Rosemary Harries (RH): In 2008, I went for a routine eye examination at Tompkins Knight and Son in Northampton. My optometrist, Brian Tompkins, used his new Optomap ultrawide field laser scanner, which picked up a shadow and unusual vein movement in my eye.

RH: Brian referred me to my GP to arrange a hospital appointment, who then sent me to the eye unit at Northampton General Hospital. There I saw a consultant ophthalmologist, Dopinath Reddy, who after examining me asked me if I was prepared to travel to Liverpool to see Professor Bertil Damato at the St Paul’s ocular oncology unit at the Royal Liverpool Hospital.

RH: A week later, I went to see Professor Damato who immediately booked me in for an operation the next day. I was terrified at the thought of having cancer and as my first grandchild was only three months old, I had to come to terms with the possibility that I may never see her grow up.

RH: I was in St Paul’s from Monday to Friday. I had the operation on Tuesday where a plaque was fitted in the back of the eye, which zapped the potentially cancerous cells. On Thursday, the plaque was removed and I was allowed home on the Friday.

"I was terrified at the thought of having cancer and as my first grandchild was only three months old, I had come to terms with the possibility that I may never see her grow up"

RH: I attend an outpatient clinic regularly and now that I’m signed off from St Paul’s, I continue to attend at the Northampton eye clinic every six months.

All seems ok with my eyes apart from double vision, which is rectified with prisms in my spectacles. Before my examination in 2008, I had no pain and I was not aware of anything out of the ordinary, although I did suffer from headaches. It came as a great shock that I had a potentially life-threatening tumour.

RH: Nine years on and I love life. I make the most out of my time spent with my nine-year-old granddaughter Olivia, and five-year-old grandson Henry. I wish to thank Brian Tompkins, Professor Damato and all the other NHS doctors and nurses who to this day look after me so incredibly well.

Did Rosemary present with any symptoms?

Brian Tompkins (BT): Rosemary showed no symptoms whatsoever. She is one of our care plan patients, which is a monthly fee-based plan that gives patients complete reassurance, so that they can come in at any time for any reason without any concerns about having to pay extra. Rosemary came in for her full eye examination and we did a routine Optomap on her and found this melanoma, which would have killed her if left undetected.

What was your reaction?

BT: I wrote to Rosemary’s GP asking to immediately refer Rosemary to the local hospital. On the day, we sent her down to eye casualty to be examined and they immediately referred her to a specialist oncology unit in Liverpool.

How did you explain to Rosemary what you had found?

BT: I used the language that I use for every patient, which is explaining it in as simple terms as I can. I use that type of language for every single disease process or clinical finding that we might discuss. Even if we’re talking about myopia, I’ll say, ‘you’re short sighted and this is…’ We bring the language down to a fully understandable level for patients. So, for Rosemary it was a relatively simple explanation of, ‘we’ve found something at the back of your eye that we’re not really happy with. It might be a pigment spot, which needs monitoring, so we better just check it over and make sure that we’re not missing something important here.’

What procedure did Rosemary have?

BT: Rosemary went up to Liverpool to see a specialist and had a ruthenium plaque implanted and then she was irradiated. As a result, the tumour was destroyed enough so that it did not metastasise.

Why is it important to highlight cases like Rosemary’s?

BT: It’s our job as optometrists to educate every single patient that we see. It is our duty to bring the level of education up so that patients understand that we don’t just do a simple sight test. It is a full and comprehensive eye examination and that is really crucial.