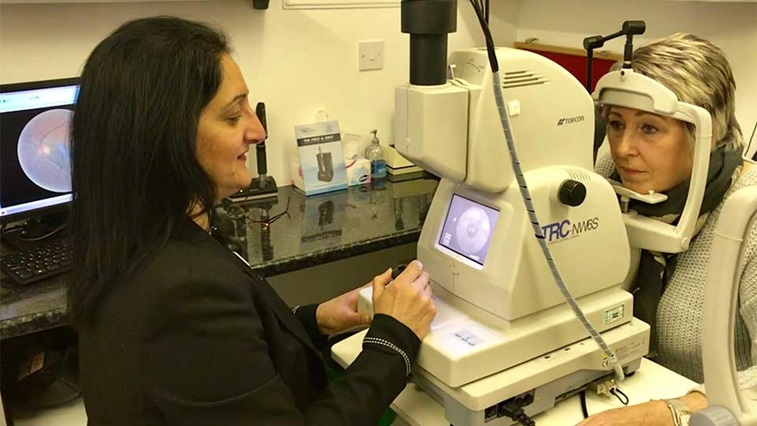 Mary Barber (MB): I suddenly noticed a very marked ‘improvement’ in my distance vision. I found this odd as my vision became better without glasses. I had a holiday booked and felt I should visit my opticians to have it checked before I went away.

MB: I made an appointment with my optometrist, Prab Boparai, who carried out a thorough eye examination, following which she advised that she would write to my GP with her findings and that I should arrange to have a blood test. I was concerned at this point, but Prab was very reassuring and said she would see me again when we knew the results of the test.

What did the GP find?

MB: I had a fasting blood test, and then my GP telephoned me the next morning at 8am to make an appointment for that afternoon. He explained that I had a very high blood glucose reading. I had another glucose and urine test, which revealed that I had Type 2 diabetes. Metformin was prescribed and then increased over the following few weeks to 500mg three times daily.

I was very concerned at this point as I have always been fit and healthy and the idea of taking this medication for the rest of my life was an upsetting and sobering thought, especially as I did not have any of the other usual warning signs, such as increased thirst, tiredness or frequent urination.

I researched Type 2 diabetes as much as I could and learnt how important it is to attend your diabetic screening appointments and to visit the opticians for regular eye tests.

MB: After taking my medication, my vision reverted to my original prescription. Prab keeps a close eye on me and I feel that had it not been for the prompt action of Prab, things could have been very different.

Over the following months, I made a dietary change based on my research on the effects of carbohydrates on insulin levels. My medication was reduced and finally, two years on, I am Metformin free.

MB: I now realise the importance of eye care and regular check-ups, plus the dedication of an experienced optometrist – not just to have the benefit of improved vision with the most appropriate prescription lenses, but also to identify and alert health professionals of other underlying conditions, which could otherwise go undetected and cause possible health complications. I also appreciate my optometrist who goes the extra mile – thank you Prab.

Prab Bopari (PB): In her previous eye exam, 10 months prior, Mary was hyperopic. However, her latest refraction on the day revealed a significant bilateral myopic shift, which is either an increase in short-sightedness or decrease in long-sightedness. This resulted in a much lower hyperopic prescription for Mary. It also showed that her unaided vision was much better than before.

PB: There are two common reasons for a myopic shift, either a nuclear sclerotic type of cataract or hyperglycaemia (increase in blood sugar levels). The former is unlikely to occur equally in both eyes, furthermore there were no signs of cataract in either eye. This took the suspicion to the latter. I proceeded to take a retinal photograph to look for any possible associated retinopathy but found none.

How did you explain to Mary what you had found, or suspected?

PB: Mary was fairly anxious on the day, so I had to take care whilst explaining the results in a non-alarming manner. I explained that there is a possibility that the findings today may just be a normal change in her prescription or it may possibly be related to her blood sugars, but we won’t know until further tests are done.

PB: I advised that, with her consent, I would like to refer her to her GP for blood tests. I reassured her that her vision is perfectly fine with the new prescription. However, I also advised her not to change her glasses yet and to stop wearing the current pair, as she sees better without them. I told her that I would recheck her eyes after she had seen her GP and got the test results.

How have you been involved in the process since the sight test?

PB: Shortly after, Mary got in touch to inform me that she had been diagnosed with Type 2 diabetes and was taking medication to control it. I advised her to return to see me once her diabetes was under good control so that there would be no fluctuation in her vision or prescription. She returned six months later when her diabetes and blood sugar levels were under control, and her vision had returned to being longsighted as before.

Why was it important to make a referral after the sight test?

PB: As Mary’s unaided vision had improved she could have easily stopped wearing her glasses and gone on holiday unsuspecting of her underlying diabetes, which, if left untreated, could have had serious health implications. She had no other diabetic related symptoms and had no idea that visiting her optometrist could result in the detection of diabetes.