The piece of equipment that I could not live without is the Paskal 3D sight test system. Having used it for just a short period of time, I’m absolutely sold that it’s a great bit of equipment.

My iPad transmits a test chart via Bluetooth to Apple TV. All you have on your desk is an iPad, so there are no wires trailing everywhere. You control the screen using the iPad, which allows you to switch between 3D and 2D sight test charts. There are 80 different charts available and you can set up your own routine. The patient views the Apple TV screen through circular polarised lenses.

I will use this on every patient as it’s more or less the same as a normal refraction. The main difference is that you are not covering one eye and then the other, so the patient has both eyes open all the time. They’re sitting comfortably behind the refractor head and they’re not aware that you’re switching from one eye to the other. People always have a problem with switching between eyes or opening both and you don’t get any of that with the Paskal 3D sight test.

I believe that it’s going to give more accurate results in the test room. Optometrists will usually cover one eye and abolish the patient’s binocular vision. Then cover the other eye and make them uncomfortable because you’ve switched between the two. Then we try to fix that by balancing them out afterwards. With this test, you’re doing the entire test with both eyes open and in the patient’s normal binocular state. It has to be more accurate and more representative of the state that your patient is going to be in when they walk out the door. 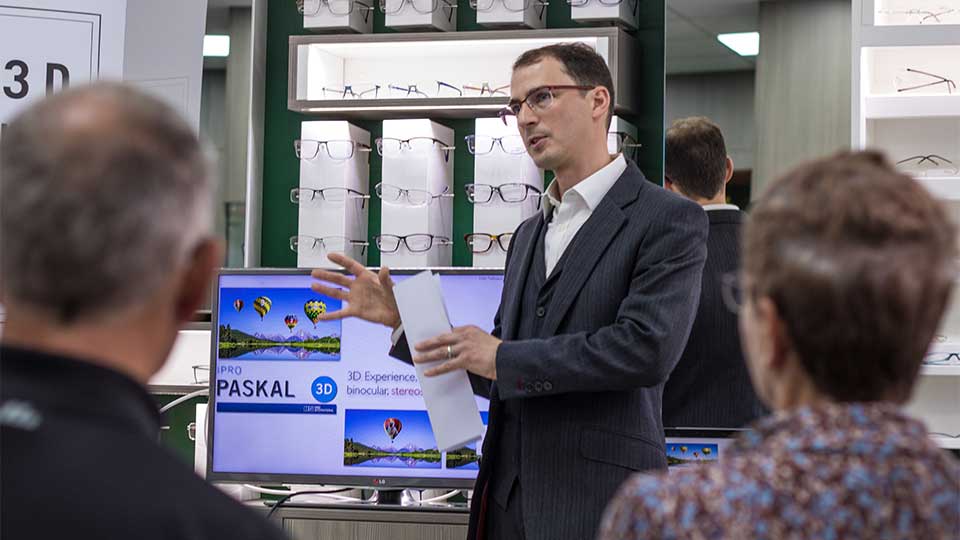 It also improves the sight test process by engaging the patient. The patient is more involved, they’re telling you extra information and communication with them improves. It’s more engaging from my point of view as well.

There are a wider range of tests available and you’re having a shared experience with the patient that is fun. Testing time is also quicker when using this system because you don’t have to give the patient time to settle down when switching between the two eyes.

It includes stereoscopic tests, which on the screen starts with a 2D image and can be switched to a 3D image. Patients are asked if they notice the stereoscopic effect, and if they don’t you immediately get an idea of whether their binocular vision is normal.

There are about 3000 users of 3D charts in Germany, with this one being the most popular. I am the first to introduce it into the UK and began using it in October. I think it will take off in this country and urge other practitioners to give it a go. Once you start using the system and engaging with the patient, they love it.