After the war, a silent battle 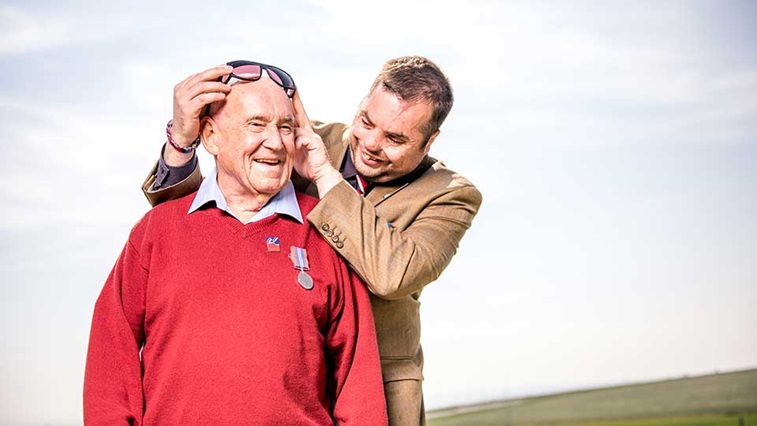 On December 6, 2006 I was on my second operational tour in Iraq as the commander of a recovery team. My job was like the AA effectively, but in Basra.

I was out on patrol and I was tasked with rescuing a vehicle that had broken down. Unfortunately, the insurgents realised that the vehicle had broken down and it was a bit of a turkey shoot. We successfully rescued all six people, but during the extraction I was shot by a sniper. The bullet went in my left cheek between my eye and my nose and it came out my right cheek between my nose and my ear.

I genuinely thought when I was told that I had lost my sight that my life was over. I won’t lie to people, I did contemplate taking my own life. I woke up in a hospital bed thinking, ‘I fought so hard on the battlefield to stay alive and this is my reward?’ It took a bit of time to get my head around it, but I got a kick in the arse quite early because I lost two friends while I was in the coma. When I got told about that, it was a real turning point where I realised I had actually survived this and wasn’t a victim.

I was finding my feet, but struggling, when Blind Veterans UK came into my life. They said ‘You’ve done well so far, but have you tried this? Can you use that?’ The way I try and explain the difference they made is that I was like a fly at a window and Blind Veterans UK opened the window. They opened up a whole new world for me and I can never thank them enough for that.

My mountain in life after I got out of the coma was to get back into sustainable, meaningful employment.  That is what I have been able to do and what Blind Veterans UK offered me. I have been the communications and engagement officer for five years.

"Everyone has at some point in their lives shut their eyes and tried to walk down a corridor in the house or tried to imagine what it is like to be blind. But you always know you can open your eyes again"

There is always that one person who you just have a conversation with and you know that their life is going to change. I was in Birmingham recently speaking to a gentleman and his wife, both in their 80s. She was despairing and nearly in tears because she was seeing the person she had loved for all of those years disappear. He had been in the RAF and he thought he was losing all the things that were precious to him because his sight was going. I had a conversation about the equipment and services Blind Veterans UK can offer. Within an hour of being at this event and speaking to me, his whole body language had changed. His wife too. It is like I had given them a plate of hope. To see that and be part of that is one of the biggest drivers in my life and why I love the job.

I started wearing different eyes just for a laugh. Now I have 16 different glass eyes. I have a dart board, an archery target and a terminator eye which is all black with a red dot. I had a special one made up for the Lions rugby tour recently. Blindness is a difficult thing to talk about, but being open about the fact that the eye doesn’t work gives people a way in. It gives them a question to start a conversation. That is good because I don’t want people to be afraid to talk about sight loss. I think the less we demonise a disability, whether it be mental health, sight loss or limb loss, and the more we allow people to talk about it, the more that people can understand it.

I have what is classed as 20% vision. I have the full peripheral picture, but it is like looking through frosted glass or opening your eyes under water. I can see colour, shape, shadow and contrast, but I am unable to focus. Everyone has at some point in their lives shut their eyes and tried to walk down a corridor in the house, or tried to imagine what it is like to be blind. But you always know you can open your eyes again.

I am not sure if regret is the right word about parts of my life. Would I change anything? Well, I’d probably duck next time. I remember my life being put in perspective by a 10-year-old who asked me if I could build a time machine and change everything, would I do it? Obviously, would I want my sight back? In a second. But would I sacrifice everything I’ve achieved and everything that I have done over the last 10 years to not have gone through that hardship? No, I’ve helped too many people and I’ve achieved so many things.

Blind Veterans UK offer lifelong support to 4,700 veterans, of which 87% are over 75 years old and 97% are not war blinded. Each veteran is supported with whatever they need to discover a life beyond sight loss and live independently. This could be anything from rehabilitation, specialist equipment to help them make a cup of tea, bringing them together at social events, or inviting veterans on a respite week to one of the charity’s centres in Brighton or Llandudno.

However, the charity also knows that there are many more veterans out there battling severe sight loss. The No One Alone campaign is reaching out to the estimated 59,000 vision-impaired men and women who could be eligible for support but don’t currently realise it. Most of these completed their service, including National Service, many years ago and have since lost their sight due to age-related conditions such as macular degeneration or glaucoma.

If any of your patients could be eligible to support find out how Blind Veterans UK could help by calling 0800 389 7979.