“A CT scan ruled out any tumours, but showed I had papilloedema”

Lucy Whittingham (LW): I was diagnosed with labyrinthitis by my GP, as I had been suffering headaches and a lack of balance. My symptoms were worsening and sleep was the only relief I could get, so I went back to the doctors. They gave me different medication and advised me to book an eye test as soon as possible.

My health seemed to deteriorate very quickly – I was experiencing tunnel vision and blotchiness and so my mum drove me home from the doctor’s surgery to help book an eye test that afternoon.

Unfortunately, the earliest appointment I could get at the local eye casualty was for five days later, which I knew would be far too late as I felt like I was going blind. I tried my local optician, but they were also too busy for a same day appointment. I was getting so upset as it felt like I was running out of options of where to go for help. Fortunately, my sister rang Vision Express at The Oracle Centre in Reading and we got an appointment immediately – I was so relieved.

How did you feel when you were told that there could be something wrong?

LW: Obviously being in a situation where you know that something is seriously wrong is never pleasant. However, I was just so relieved to be taken seriously, in a safe environment, that it almost negated the worry of my actual condition.

Ben, the optometrist who examined me, arranged an emergency referral for me to the eye casualty at Royal Berkshire Hospital and I was seen within half an hour. To have such a stressful situation be made ok by Ben and the Vision Express team really was amazing. Ben even called in the evening to check how my hospital appointment had gone, which was so kind.

What was the diagnosis?

LW: A CT scan ruled out any tumours, but showed I had papilloedema – a condition where increased pressure in or around the brain causes part of the optic nerve inside the eye to swell. I was given medication to reduce the pressure and booked in the following week for a lumbar puncture under X-ray to remove the excess fluid around my spinal cord.

I think what was scariest about my condition is that the cause is still unknown. I’m a healthy person who doesn’t even wear glasses, but I still found myself telling my son how to call my mum in case I went to sleep and never woke up – my symptoms were that bad. I lost the ability to drive for seven weeks, I couldn’t go to work and I lost so much confidence because of it. 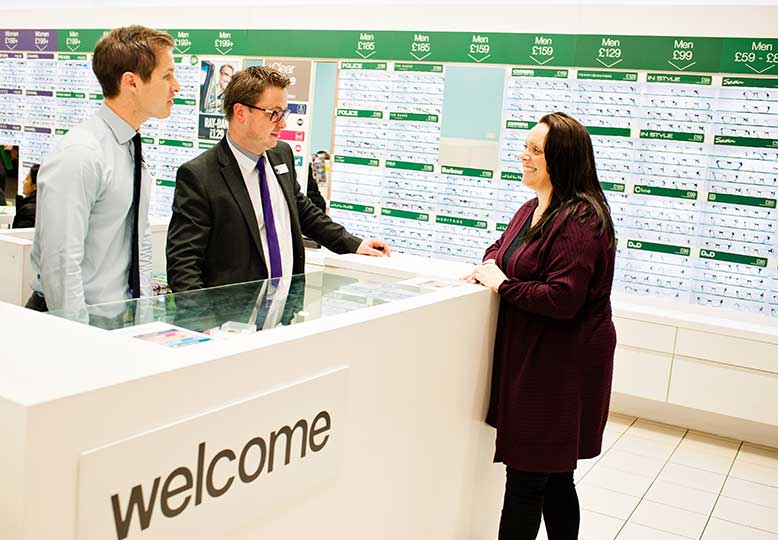 LW: In short, yes. When you go through an experience such as this, especially having never had any issues previously, it really does bring home the importance of looking after every aspect of your health, not least your eyes.

If I can encourage just one other person to get their eyes tested by sharing my story I feel like that’s my job done. It is so easy to put off going to the optician or not take changes in your vision seriously but believe me, you don’t want to risk losing your sight or worse.

LW: My pressures have now returned to within normal ranges and I have been discharged from the hospital’s care, but doctors have advised me to go straight to A&E if any of the symptoms occur again. I’ll also be keeping up with regular eye examinations at Vision Express.

“I’m a healthy person who doesn’t even wear glasses, but I still found myself telling my son how to call my mum in case I went to sleep and never woke up – my symptoms were that bad”

Ben Richardson (BR): We do digital retinal photography as part of the pre-test, and I knew from looking at the photos that there was a problem even before Lucy told me her symptoms. During the eye test itself, I could see signs of papilloedema. She had swollen optic discs and disc haemorrhages due to an increase in intracranial pressure. This was causing her symptoms.

BR: I was very concerned and knew we needed to get her seen at the eye hospital as soon as possible. I could see Lucy had papilloedema but I did not know what was causing the increased intracranial pressure. I was anxious to get her to hospital as I knew it could be caused by a brain tumour.

How did you explain to Lucy what you had found?

BR: I calmly explained what I could see in layman’s terms. I didn’t want to scare Lucy, but I also wanted to be informative and give her as much information as possible, as I know it can be confusing. I told her that I could see swelling at the back of her eye, which can sometimes be linked to unpleasant conditions, and as such I wanted to get it checked out straight away at the eye hospital.

BR: I rang the eye casualty straight away after I completed Lucy’s eye test. As soon as I faxed through the referral note, they called me and told me to send her over immediately, as they could see the urgency.

If we hadn’t ensured Lucy was referred and checked out straight away, there could have been serious consequences. Papilloedema is potentially sight-threatening, and even life-threatening. An immediate referral meant Lucy could get treatment straight away to keep visual damage to a minimum.

BR: Lucy has now been treated at the hospital and has made a successful recovery. The headaches have gone and her vision has improved. Lucy’s vision is fine, so she doesn’t need glasses, but what many people don’t realise is that the main part of an eye test is about eye health and disease detection. Lucy’s story is the perfect example of how necessary it is to have regular eye checks.