“I had an enucleation of my right eye”

Wardale Williams and Observatory the Opticians optometrist, Will Norman, and his patient, Ralf McMurray, talk about the referral process after the diagnosis for a detached retina 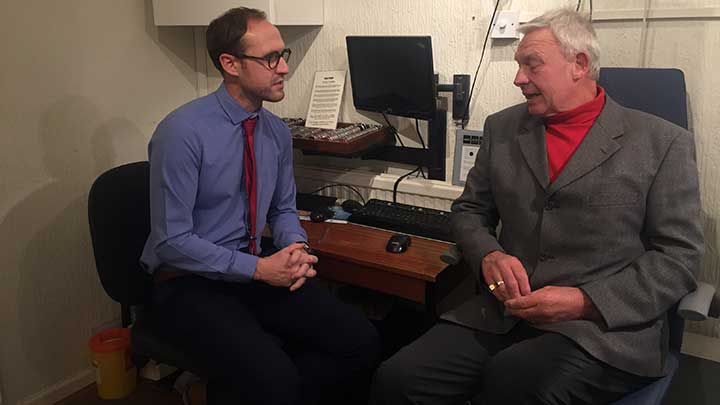 Ralph McMurray (RM): I never realised I had a problem with my eye sight. I decided to go to the opticians because of my age. I had not had my eyes properly tested before and I was buying ‘off the shelf’ glasses to read. I just thought it prudent to have them tested properly.

In hindsight, I was seeing floaters, and when closing my eyes light seemed to be coming in. At the time, I never thought anything about this and put it down to tiredness and age.

How did you feel when you were told there could be something wrong?

RM: I was informed by Will at Wardale Williams that he could see I had a detached retina. At that point, I did not realise the seriousness of what he was saying or the potential outcome. However, I became anxious when Will contacted my local hospital for an urgent appointment.

RM: Will attempted to get me an appointment at my local hospital’s ophthalmic department and arranged for me to be seen at 8am the following morning. My eyes were examined and X-rays taken along with numerous tests and procedures. Then, all of my records were immediately forwarded to Moorfields Eye Hospital because they saw that I had a growth on the back of my eye.

At Moorfields, my eyes were again thoroughly examined, and I was informed that I had ocular melanoma in my right eye. The options available were explained to me, and because of the size and location of the growth, I had an enucleation of my right eye carried out at St Bartholomew’s Hospital.

"Then, all of my records were immediately forwarded to Moorfields Eye Hospital because they saw that I had a growth on the back of my eye"

RM: The referral from Will, through to my appointment at West Suffolk Hospital, Moorfields and St Barts was exceptional. I was dealt with professionally, shown empathy and had my prognosis for the future explained. I attended the opticians on 2 February 2016 and the enucleation was carried out on 29 February 2016.

What has the outcome been?

RM: As a result of the enucleation of my right eye, a biopsy was taken and it has been identified that I have Monosomy 3 (one half of the gene is missing). Because of this, along with the size of the tumour and my age, I am classed as high risk for metastasis. In the majority of cases it appears first in the liver because the eye and liver are blood red. I have MRI scans every six months, and if metastasis is identified there are trials and treatments that I can try but there is no cure for this type of cancer.

RM: If I had not had my eyes tested, I believe the cancer would have grown and it may not have been treatable. I may not have been here to answer these questions. In my opinion, it is essential that everybody has their eyes tested from an early age. There is so much that can be identified from an eye test, and a lot of the diseases and conditions are treatable if discovered early.

How did you spot that there was a problem?

Will Norman (WN): When Ralph attended for his first sight test in February 2016, initial questioning revealed that he had been noticing some floaters in his right eye since September the previous year. He also reported that he had been hit in the right eye by a cricket ball. On examining the eye, I discovered a retinal detachment (macula on) in the right eye. However, there was nothing to indicate that there was anything else going on.

How did you tell the patient what you had found?

WN: I thought at the time that the prognosis was good. His macula was still attached, visual acuity was good, so we discussed the seriousness of the detachment and the fact it was going to require urgent attention but were hopeful that we had caught it before it had a real impact on his vision. We arranged an emergency referral to the local hospital eye department.

How have you been involved in the process since?

WN: The first I knew about the ocular melanoma is when I received a letter from the hospital eye service confirming that a mass was found at the back of Ralph’s eye and that it was a malignant melanoma. The letter also stated that Ralph had agreed to enucleation.

I next time I saw Ralph was July 2016 following the removal of his right eye, he was still coming to terms with what had happened and the high likelihood that the cancer will spread.

Ralph and his family have since been keen to increase awareness of the importance of regular eye checks and raise the profile of the charity OcuMelUK, which is something as a practice we have been keen to support.