Home on the road

For Mellis Eyecare owner, Iain Mellis, the best weekend away involves a trip down memory lane 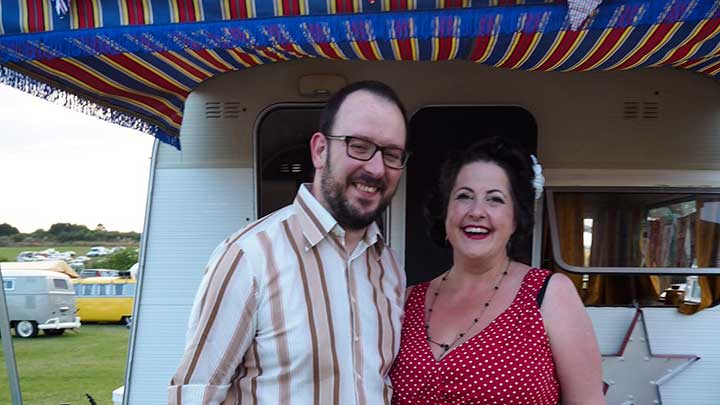 My wife and I are the North East representatives for the Retro Caravan Club. We meet up with like-minded caravanners and occasionally we will get dressed up in vintage clothes.

There are about 800 paid members of the club as well as 8000 members of the Facebook group. Considering it is only a couple of years old it has grown rapidly. So far, we have set up rallies at Malton, Hexham and as far up as Thirlestane Castle in Scotland.

My wife got me involved in the club initially. She lived briefly in a 1982 Cadet Ten caravan as a student. After she joined the Retro Caravan Club Facebook page, we went over to have a look at the caravan that had been on her parents’ driveway for the past 10 years. It was still bone-dry inside. We gave it a good scrub, changed the tyres and it was good to go again.

Travel back in time

When we started to take the Cadet Ten to display rallies we didn't think it would get much attention but people love it. It's a bit like a Tardis. It looks small from the outside, but we've had eight people in this little 10-foot caravan enjoying a cup of tea with biscuits.

On a display rally, we set them up with period pieces inside the caravans, like cutlery, plates and a 1970s portable record player that we sometimes take with us. People can have a look around and say, ‘We used to have one of those.’ The joy you see on people's faces as they remember going on caravan holidays when they were younger is priceless really.

Modern caravans tend to all look the same whereas classic caravans have a bit of character. They all have their own stories. The chairman of the club owns a 1935 Winchester caravan which featured on Channel 4’s George Clarke’s Amazing Spaces. They found it in a barn where it had been left for many years.

Caravans allow you to get away from the busy life that you have in practice. Just waking up, opening the door and immediately being in the countryside is amazing. There's the wildlife around you that you wouldn't necessarily see in town. I get to take the dog for a walk while the kids are still sleeping. It lets me reset my mind a little bit.

The club members are definitely a mixed bunch. Outside the core of car enthusiasts there are people who are vets and dentists, there is a hand bag designer and a piano restorer. I’d say the key thing that brings us together is that we are all quite happy to get our hands dirty and we tend to be quite innovative.

I get satisfaction out of fixing things, from spectacles to caravans. Knowing that you have restored something and kept it alive for future generations is very rewarding. We have three caravans now and we have three young sons – one for each.