"I never thought it was going to be a brain tumour"

Specsavers optometrist, Rubena Kerr, and her patient Michelle Crawford, tell OT  about the experience of identifying a brain tumour during a toric contact lens check 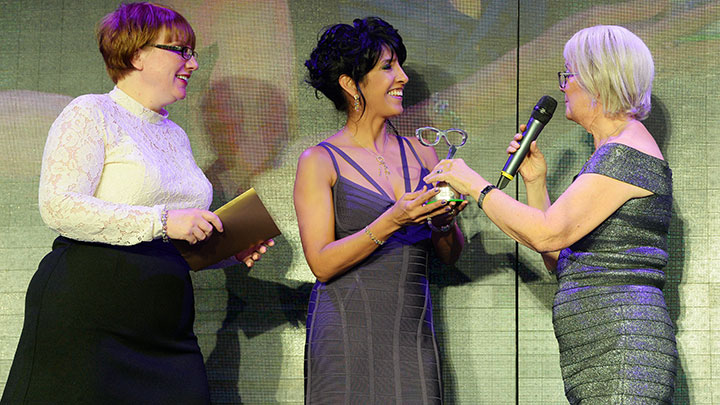 What prompted you to go to the opticians?

Michelle Crawford (MC): The vision in my left eye was slightly blurry down the side. I gave it a month or two because I thought it might go away, but it didn’t. I went to the opticians and told my optometrist, Rubena, what was wrong with it, but she couldn’t see anything. We tried another contact lens that was higher in strength to see if it would help. I went away and gave it another couple of weeks, but nothing happened. Then, after I’d been on holiday, I went back to see Rubena and she asked how I was. I said that it was great being away, but it’s just a bit bright in my left eye, and she knew something was wrong from me saying that. I had a visual field test and it was really bad.

How did you feel when Rubena told you there could be something wrong?

MC: When she said: 'We need to get you to the hospital, and it’s tomorrow that you need to go,' that’s when I realised that there was something wrong. Until then I thought, 'I’ll have to go and see someone and it’ll be in a few weeks’ time.' I was convinced they were going to tell me I had multiple sclerosis (MS) because my mum has got MS.

When I went to the hospital and had all the checks, I could see how busy it was, but people were leaving and I was one of the few people that had to keep going backwards and forwards to speak to somebody, and then go back and wait again. After I had an MRI they told me that I’d need to go back to see the nurse and that I couldn’t go home yet. It was then that I knew there was something seriously wrong. I had no idea that they were going to tell me it was a brain tumour. It never crossed my mind that I would be told that.

The first thing I thought was at least it’s not MS, it’s something else that’s not as bad. At the time, I didn’t know how bad it was. I was a bit shocked because I never thought it was going to be a brain tumour.

Were you aware of the importance of sight tests to general health previously?

MC: I would always go to the optician whenever there was something slightly wrong. Generally, most people I’ve spoken to haven’t been aware, but they are now that I’ve told them what happened to me. I don’t think most people know just how important a sight test is.

Are you still receiving treatment?

MC: I get an MRI scan every year. I had one recently and it was absolutely fine.

"I knew once I saw that her visual fields were so bad that there was something dramatic going on, and that she needed to be seen straight away"

When did you first notice that something was wrong?

Rubena Kerr (RK): I noticed during a toric contact lens check. The most remarkable thing about this whole story is that it didn’t even come from a full sight test. She came in after her holiday and we were just chatting about it when she said, ‘I just feel as if everything is really bright in my left eye and I’m not sure if I’m seeing too well at the sides.’ I normally wouldn’t do a visual field test at a contact lens check – I would normally re-book, but I did it and she had three-quarters of her visual field missing. That’s when I thought, ‘there’s something major going on here.’

A couple of days later I re-did the test and it was the same, so I phoned Hairmyres Hospital straight away and they saw her the next day. That’s when she was diagnosed. It was the biggest brain tumour they had ever seen. I’ve diagnosed a few brain tumours before and in all of them they’ve had papilledema, which is a swollen optic nerve, and they’ve had headaches, but Michelle had none of those symptoms – so it was just by chance of her talking to me that I spotted it.

RK: I knew once I saw that her visual fields were so bad that there was something dramatic going on, and that she needed to be seen straight away. I couldn’t believe she had no symptoms, but I’m so glad that everything that was done on that day was the right thing to do. Michelle was told that if she hadn’t got that brain tumour diagnosed when she did, it would have been too tricky to operate.

How did you tell Michelle what you thought you had found, and what were the next steps that you took?

RK: I try to stay calm in those situations. I said to her that this is not normal and we need to get to the bottom of what’s going on.

We’re part of the lens scheme in South Lanarkshire and have a direct link with Hairmyres Hospital. If we have any emergencies, we just phone the clinical divisions unit and tell them what we’ve got. They’ll see patients the same day. It’s a fantastic link we’ve got with the hospital. With Michelle, we phoned in the afternoon and they saw her the next morning.

What advice would you give to other optometrists when looking out for this type of thing?

RK: Listen to what your patient says. Think about what sounds unusual and extract as much information as possible. I think that if I hadn’t picked up on what Michelle had said and just brushed it off, that it would be a very different story.

I would say to patients, tell your optometrist about anything at all that’s different or unusual. Come in and we will check it. 99% of the time it isn’t anything serious and we can sort it out with a new prescription.

How did it feel to be recognised at Specsavers’ Spectacle Wearer of the Year Awards?

RK: It felt absolutely amazing. It’s the first Dame Mary Perkins Award and I feel honoured to be named the recipient. I’m very proud to receive it.