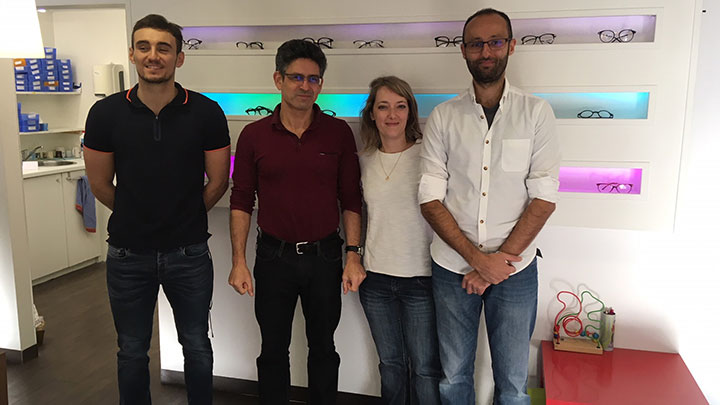 Mehran Waheed on the challenges and satisfaction of practising in another country after moving with his wife and young daughter from Essex to Toulouse.

Can you tell me about your career journey?

I fell into optometry really. There was a careers day at school and my parents liked the sound of optometry so they gently persuaded me in that direction. I did some work experience and I found the clinical side of it very interesting. Eyes and visual perception always interested me.

I studied optometry at the University of Bradford and did my pre-reg at Moorfields Eye Hospital. I was doing sessional work for the hospital, then I moved back to my hometown of Northampton where I worked for an independent optician, Sheinman Associates, for six years. I then moved to Essex to work for an independent, Patrick & Menzies, in Braintree for four years.

Why did you decide to move to France?

When our child was born, it changed our priorities. My wife is French and we wanted to move to France before our daughter started school to be closer to my wife’s family. France has a different lifestyle and better weather as well. We are in the south near Toulouse and it is a lot sunnier.

Can you tell me about the opticians where you work in France?

I'm based at an independent called Espace Optique Bonnefoy (EOB) in central Toulouse. It is fairly unique as it has a relatively large consulting room and a low vision centre, adjacent to its quaint little boutique. There are three full-time staff (one optometrist and two dispensers), and often an optical student. EOB caters to all, but we often have patients referred to us by doctors and ophthalmologists because we specialise in more complex prescriptions and contact lenses, as well as low vision. We also receive referrals from osteopaths as Monsieur Abecassis, our boss, specialises in binocular vision issues that could be affecting posture and balance.

What challenges have you experienced working in another country?

To have a normal sight test like we know in Britain you have to wait, depending on your town, from a month to 12 months. That is why the French have recently been giving the dispensing opticians more ambit to do a refraction. Working here has made me realise how lucky we are to have the system that we do in Britain.

I have really come to appreciate how important good dispensing is, and it is nice to not be stuck inside the consulting room all day, but to see the entire optical process, from start to finish. My biggest achievement so far would have to be glazing and fitting my own pair of glasses.

Are there any cultural differences?

The opticians here are more boutique and glasses are a fashion statement rather than just being functional. There are a few multiples, but there are also a lot of independent opticians. Most of the patients I see have a second pair of sunglasses because it is so sunny that it is a necessity.

Most French people need to have private health insurance so a proportion of the cost of the spectacles is covered. If you suggest a higher priced lens or coating, they don’t question it because they get most of that money back from their health insurance.

I have a two-hour lunch break – I start at 10am and finish at 7pm every day. It was weird during the first two weeks, but now I enjoy staying in a restaurant for an hour and half or going outside and exercising.

Also, the dress code is a little less formal. No need for a suit and tie. Smart casual is fine.

How have you found practising in another language?

I did know a bit of French from school before I moved over and I am half-Tunisian so I used to speak French with my family. But living and working in France was a big step. I have had to learn all the different parts of the frame and the pathology from scratch. There is also a different level of formality and politeness in the language that I have had to adjust to. Remembering when to use "tu" or "vous" is the hardest part.