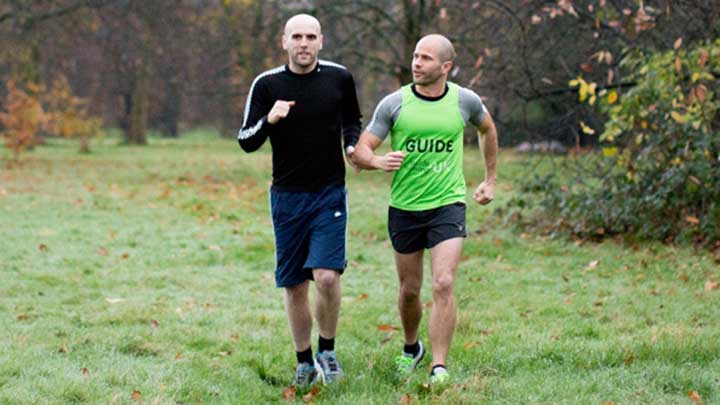 I had no idea that I was losing my sight. Essentially, until someone tells you it’s happening, you assume that’s just how people see.

I used to play cricket and I would sometimes lose sight of the ball but I thought that the bowlers were quick and my reaction times weren’t so good.  It wasn’t until I was 13 years old that during a routine eye appointment my optometrist noticed an anomaly and said ‘You might want to go and get it checked.’

Within three years I was registered blind. I don’t have detail in my vision – I don’t see faces, there’s no edge detection or anything like that. I think with retinitis pigmentosa (RP), people do struggle to explain it. If you’ve ever seen Eternal Sunshine of the Spotless Mind, there’s a scene in it where Jim Carrey is trying to make out a woman’s face. He can’t see the face, but he knows she is there. It’s like that. Because I had sight when I was younger, I can make a pretty good guess as to what is there. One of the oddest things is that if an object or device existed when I could see, then I have a good idea of what it looks like and how it functions. But if it was designed or created after I lost my sight, it is slightly hard for me to grasp the visual concept.

"At times it is intensely, intensely difficult. You wonder why you are going back out and putting yourself through it. But then there are moments of sheer exhilaration"

I was doing a lot of long distance running and I began to wonder if it was possible to compete solo, without a guide runner. For a blind person to compete solo, all you need is the right location. That location is the desert. It's quite open, there is sand, there is nothing to run into. We came up with a correctional navigation system, where if you are going in the right direction there is no sound. As soon as you deviate from the correct direction, it uses beeps to get you back in line.

It turns out that running in the open plain desert is relatively easy. You can't see anything, there are no sounds, there are no smells. It's just sensory deprivation for a long time. On day two I was running and I took a massive blow to the face and hit the deck. I'm on the floor and a runner comes by me. He's there thinking I might die and I ask him 'What happened?' He said, 'You ran into a flag pole.' I asked, ‘How many flag poles are there?’ He said 'Just one.’ In hundreds of kilometres of desert, I found the one flag pole.

On day three there was a rock field where the rocks were anything from the size of your fist to a loaf of bread. I took the skin off the bottom of my left foot, and separated where the bone connects on my left leg. I was in a lot of pain and was beginning to black out. I was losing feeling in my hands and feet. The problem is, once you are in a rock field, no one is going to come and get you. The only way was to walk out. I dug deep, got out of the rock field and finished the day.
Sometimes ultra-marathons are absolutely brutal. You’re managing a reasonable level of fear, knowing, at the same time, that if the fear becomes too much you’re going to make mistakes. It’s a bit of a catch 22. At times it is intensely, intensely difficult. You wonder why you are going back out and putting yourself through it. But then there are moments of sheer exhilaration. I think I ended up chasing those moments and pushing the difficult moments to the back of my mind.

Method to the madness

I never train to be at the front of the pack because it holds minimal appeal. The question ‘Can it be done? Is it possible?’ – I find that more compelling. We are all going to get to the end of our lives at some point. I certainly never want to look back and think, ‘Should I have gone further? Should I have gone harder?’ I would rather have the stories to tell my grandkids – that I tried these things and sometimes I failed, rather than I didn’t even show up.