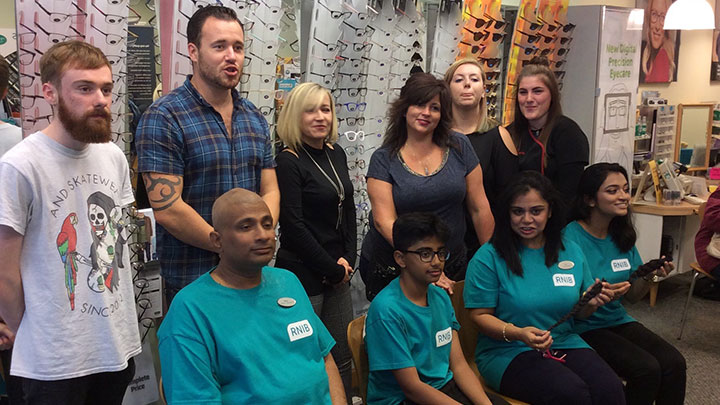 Store director and optometrist at the Burnham-on-Sea branch of Specsavers, Rama Venkat, has shaved his head to raise money for the Royal National Institute for the Blind (RNIB).

The optometrist’s family also showed their support at the fundraising event, which raised over £1000 for RNIB as part of National Eye Health Week (18–24 September).

Practice manager and Mr Venkat’s wife, Sai, as well as their daughter Thrinayani, who has previously worked at the store, each had seven inches of hair cut off, which is being donated to the Little Princess Trust – a charity that makes wigs for children suffering from cancer.

Rama and Sai’s 13-year-old son, Thrilokesh, also had RNIB shaved into the side of his head.

Speaking about the event, Mr Venkat said: “We’ve been fundraising for RNIB for quite a few months now, but to surpass our original target of £500 and to have raised more than £1000 is just fantastic.”

“We wanted to do something as part of National Eye Health Week to help raise awareness of the work that the charity does, as well as highlighting the importance of looking after your eyes and making sure people have regular sight tests. It’s been a really fun day in store and the whole team has enjoyed getting involved,” he added.

Customers were able to take part in a tombola on the day, with the chance of winning prizes that were donated by businesses in the town. A ‘guess the number of contact lenses in the jar’ competition and a ‘guess where I’m from’ competition will be running until the end of the month.

To sponsor the Burnham-on-Sea team, visit their JustGiving page.