Will Kent describes his vision as “like looking in to space.” The 15-year-old and his mother, Laura Kent, talk with OT  about Stargardt disease 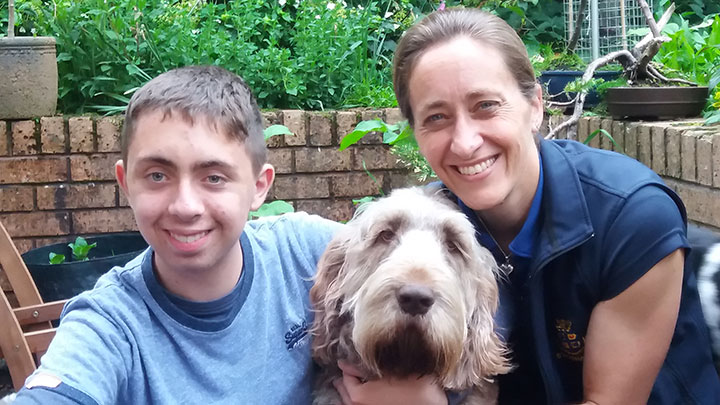 Will Kent: I told my dad about the flashing lights before I went to school. I could read books and I could do sports then – football, rugby, tennis and martial arts. At seven they gave me glasses, but they didn’t help. I don’t think the teachers at my primary school believed that I was actually losing my sight. They said I was looking over my glasses. I had a teacher who would sit where I had been sitting and say I must be able to see the board. At the age of nine or 10 I was diagnosed with Stargardt macular dystrophy. After that it just slowly got worse. Everything got blurrier and there were more flashing lights.

I would say it is a bit like looking in to space, the light is like tons of stars. It has caused headaches, which are almost constant, and I can’t see people’s faces anymore. When I can look at their faces they seem like they’ve got hollowed eyes or it doesn’t look like they have any features at all. It’s difficult to work out who is who in a group and follow the conversation when lots of people are talking.

It makes it easier for me if people say who they are and let me know if they are leaving the room and where they are going. I still ride my bike, which some might think is stupid, but I enjoy it. It doesn’t matter if I hit the odd tree. I also enjoy horse riding and walking. Being on a horse is fun and it improves my mood. I read on the iPad using a maximum font, which is now becoming too small. I have been very grateful for IT as I have coped with sight loss – it’s my eye into the world.

"I don't think the teachers at my primary school believed that I was actually losing sight. They said I was looking over my glasses"

I can still trick people into thinking that I can see. This is because I walk around faster than most and somehow manage to avoid hitting things. I’m more aware of my hearing and what is around me than someone with full sight. My mind map of a new place is better than a lot of people. My mum still gets lost in hospitals, but I know my way, even in reverse, better. In the future, I would like to see a cure for Stargardt but otherwise I just get on with it.

Laura Kent: He was just a normal boy with normal hobbies until he was about seven. When we started having concerns they took a photograph of the back of the eye and that was all clear, it was fine. He went to the opticians for an assessment and they thought he was pulling their leg. They thought he was just being a difficult boy. We tried behavioural optometry. They gave him lots of exercises to do. We were tearing our hair out.

At school, they noticed that he couldn’t read the board while seated, but if he got up and read it, then sat back down again he could read the board. Will has a great memory, and he was using this to help him. It was behaviour like this that was causing people confusion. They thought William was messing them around. He got sent back to the hospital and they did another scan. That was when something showed on the back of the eye.

I remember before Will got the “proper” diagnosis, he had some nightmares where he woke up crying because he was worried about going blind. The main thing that causes his frustration is when he can’t do things independently. Because it’s an invisible disability people sometimes forget that simple things can be helpful, like saying: “Hey Will, we’re going left/right” or “Hi Will, it’s X”.

Hope for a cure

As parents our hope for the future is that technology or research into a cure will come in time to help Will. We have tried a range of new products which claim to ‘help the blind see,’ but for Will they are not beneficial because he has lost too much vision. We try to accept what life has thrown at us, but I still get angry and upset for Will when I see the frustration it causes socially and how it limits what he can do. Losing vision as a teenager is very isolating. Will actually copes very well and has an amazing sense of humour. I hope as he gets older this shines through and he is happy.