Collecting cacti started as a childhood entrepreneurial endeavour for retired optometrist Nigel Burnett-Hodd. He now has over 630 cacti in his greenhouses

I started collecting cacti when I was 13. When I was a youngster we had a derelict greenhouse in our garden. One of my older brothers was collecting cacti, but then he went off to boarding school and couldn't look after them.

I saw these cacti and I thought, 'Here's an opportunity.’ I started to offset hundreds of little ones and sell them to the local shops in trays of 20 at a shilling a time. By the time I was 17, I was selling about 4000 cacti a year. Then I went to City, University of London and stopped collecting while I studied optometry.

All through my 46-year working life I have had a cactus collection. I have kept on adding to it over the years. As long as it was a great specimen, I would buy it. Now I have a large house on an acre plot and I have built two large greenhouses. One is full of cacti and the other houses succulents. My wife is a very tolerant woman. She likes me to keep busy. At the last count, there were 486 different cacti species and about 180 succulents, including one cactus that I’ve had since I was 13. I'm nearly six-foot tall and I can't reach the top of my tallest cactus, so I would say it is about eight and a half feet tall and the smallest cactus is about a centimetre high.

"I don't talk or sing to my cacti, but I do swear at them when they prick me"

At the age of eight, my unfortunate daughter [Dr Caroline Burnett-Hodd, also an optometrist] accidentally fell backwards into a whole collection of cacti and it took several hours to remove all the spines. I've had spikes stuck in my fingers but nothing has hospitalised me. I don't talk or sing to my cacti, but I do swear at them when they prick me.

The best thing about cacti is that the more you neglect them the better they do. Because they are mainly from arid regions, they are used to having water sporadically, surviving through long droughts and then when it finally rains they soak up the water like mad and grow. If you were stupid enough to water them all the time some can actually blow up and explode.

Cacti are fascinating plants. They tend to vary depending on where in the world they come from and the climate. If they are half way up a mountain they are hairy on one side to protect from the wind, if they are further down they are very spiky because animals would like to eat them. My cacti are mainly from South America, Arizona and Mexico, but I have quite a few from South Africa, Madagascar and Saudi Arabia.

I never get bored of my cacti. You can forget all about them for a few weeks, and when you go back to them, you think, 'Wow, look at these flowers that have come through since I last looked.’ There's always something interesting. You can have a cactus that is only an inch high and its flower might be four or five inches long. 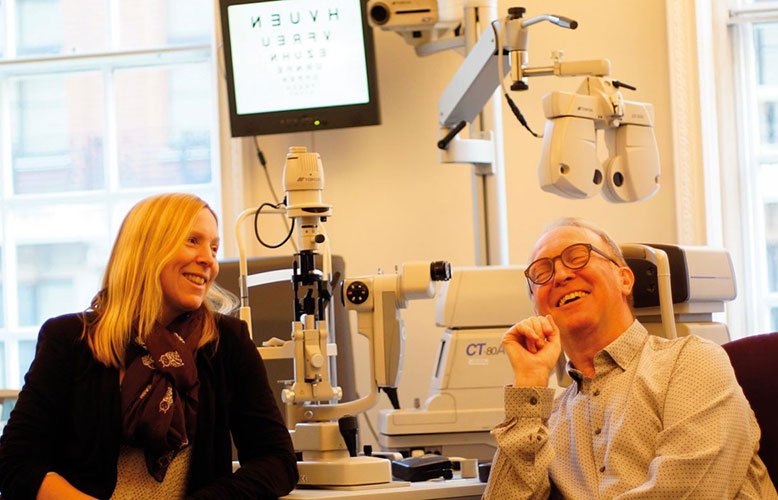 I think when you spend all day with people, it's nice to spend time in the garden with plants that don't answer back. I also specialise in daffodils, tulips and dahlias, but cacti develop their own personalities. They flower suddenly and unexpectedly. You go into the greenhouse and a massive flower welcomes you – it's like they are saying hello. The next day the flower will be gone.

You have to be a particular type to want to have a cactus collection. You need to be someone who likes to care for things and look after them. I have many favourites so it makes it difficult to pick one over another. I would have to go down and stare at them and think 'Which is my favourite at the moment?’ But probably, if I was pressed, I would have to choose the one I have had for 56 years. It's like an old friend. It has only grown half a centimetre a year and is now just two feet high. I think maybe there are lessons to learn from cacti – they protect themselves against nature, quietly get on with their business and they are reliable companions for life.

In this series we profile what practitioners get up to outside of the testing room. If you, or someone you know, has a unique hobby to share with readers please get in touch by emailing Selina Powell.