Father of three and chairman of Boston Football Club, Michael Vines, shares his experiences of glaucoma and encourages everyone to have a regular sight test

I first noticed a problem with my eyesight in February last year, while struggling to read the newspaper and assumed that I needed a new prescription for my reading glasses.

I made an appointment at my local opticians, Vision Express, where I’d been for eye tests regularly over the last four years.

As a spectacle-wearer, I’ve always been good at going for a regular sight test. In fact, two years previously I had been referred to the local hospital with suspected glaucoma, but, at the time, the hospital had felt that it wasn’t a concern.

However, going through the plethora of vision tests at Vision Express once more, the optometrist felt that while my sight hadn’t deteriorated further, the suspected glaucoma had and he referred me to the hospital once more.

"The most important thing is that, even if you haven't got a problem with your eyesight, go for a check-up"

In January this year I attended the hospital and was diagnosed with primary open-angle glaucoma in my right eye.

I was actually relieved when I got the glaucoma diagnosis because I knew it could be treated.

However, when the nurse prescribed me eye drops, and I asked how long I would have to use them for and she told me for life, I don’t think it sunk in right away. I was in a little bit of shock I think and, getting confused with cataracts, I even told my wife that if it got worse I’d ‘have them removed.’

Having used drops for almost five months now, I realise that in all honesty, it’s a small price to pay for your sight – a drop in the morning and a drop in the evening.

Unfortunately, after taking the drops for the first few months, I began to notice small spots of blood on my pillow when I woke up in the morning. Having suffered nose bleeds since a child, at first I put it down to this. But as it began to occur nightly, I got the pamphlet out that the hospital had given me and read up about the possible side effects. Reading it, I learnt that the symptoms that I was experiencing were a reaction to the drops and followed the advice to contact the hospital immediately. 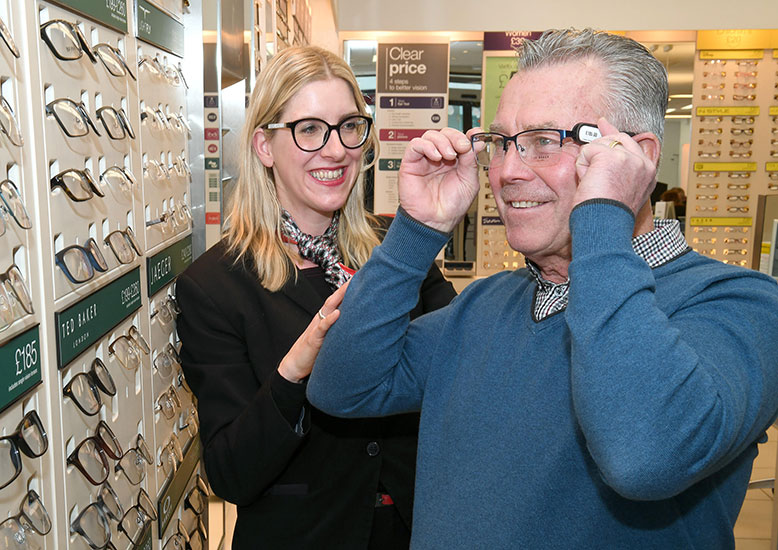 The nurse gave me an alternative prescription for eye gel drops, rather than the liquid drops, and I haven’t experienced any further problems since.

Both my mum and my auntie had glaucoma. My mum had it for 18 years, while my auntie went blind because of it. We were told that she had left it too late to get treatment.

As I’m now aware, glaucoma can run in the family – due to my mum’s diagnosis, I had previously been told that I was at risk of the condition. Now that I know I have glaucoma, I’ve told my three sons to go to the opticians to get checked out.

One of them had been struggling with the computer at work and is waiting to find out if he has it too.

While I haven’t experienced any further deterioration in my sight since being diagnosed, my sight actually hadn’t deteriorated in the first place. That’s the most frightening thing about glaucoma, it can be symptomless and you don’t always know that you have it until it’s too late to have it treated and you go blind.

I know many people who have never had a sight test. They think that because there is nothing wrong with their eyesight, they don’t need to have one. But my eyes were ‘alright’ too – with glaucoma you just never know. Therefore I would recommend that everyone go for a regular eye check, regardless of what they think their sight is like.

The most important thing is that even if you haven’t got a problem with your eyesight, go for a check-up.