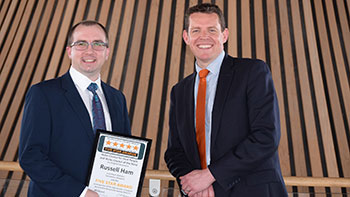 Dispensing optician Russell Ham, who specialises in care for visually impaired patients attending Specsavers’ Newport practice, has been named as the only recipient of a ‘five-star’ award in Wales that acknowledges his work in low vision.

Recognised with the award by the Wales Council for the Blind, Mr Ham was presented with the accolade from the Welsh Assembly member, Rhun ap Iorwerth. He was nominated by his patients, who “praised the high level of care he has shown them during 13 years at Specsavers,” the council said.

Commenting on the award, Mr Ham said: “I feel honoured and somewhat humbled that my patients took the time to put me forward for such an award. I get great satisfaction from enabling people to enjoy a better quality of life and independence and to be recognised for that work is wonderful.”

He added: “I hope the award demonstrates the high quality of care and support we are able to provide to low vision patients in Newport.”

The dispensing optician is low vision accredited with the NHS Low Vison Service Wales and currently has 468 low vision patients under his care.