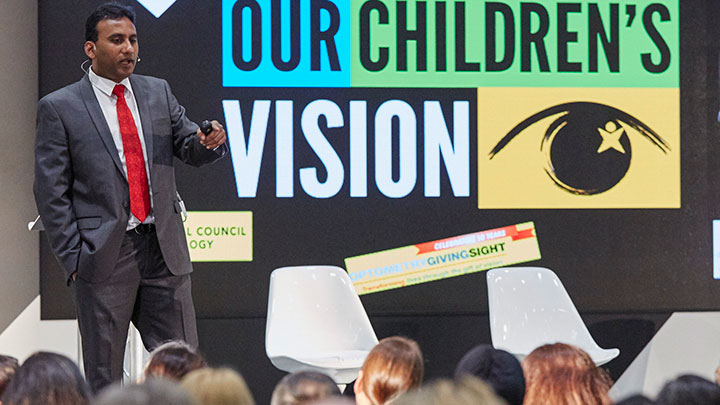 Optometrist and CEO of the Brien Holden Vision Institute, Professor Kovin Naidoo, has been named the recipient of the Saudi Ophthalmology Award.

Recognised for his continuing work in preventative ophthalmology, particularly in the areas of avoidable childhood blindness and cataract, Professor Naidoo was presented with the Prevention of Blindness Shield Lecture Award by the president of the Saudi Ophthalmology Society.

The award recognises individuals who have made a significant contribution to the prevention of blindness and vision impairment in their country or globally. The lecture and its award is presented at the Saudi Ophthalmology Conference, which is supported by the Saudi Ophthalmology Society and attended by around 1500 delegates each year.

During the conference, as recipient of the 2017 accolade Professor Naidoo gave a presentation on his latest research and public health optometry work.

Professor Naidoo is founder and chair of African Vision, which has brought together various stakeholders to address the backlog of cataract services in South Africa, specifically in the KwaZulu-Natal. He is also campaign director for the Brien Holden Vision Institute’s Our Children’s Vision, a global campaign that aims to expand access to eye health services to more children. By the end of 2016, the campaign had reached 10 million children.

Reflecting on the importance of eye care for children, Professor Naidoo commented: “The consequences of a child not being able to see clearly cannot be underestimated. These children are often misunderstood as being unintelligent, unathletic, and introverted. When in reality they are simply unable to see well enough to get involved and enjoy the things kids love to do.”