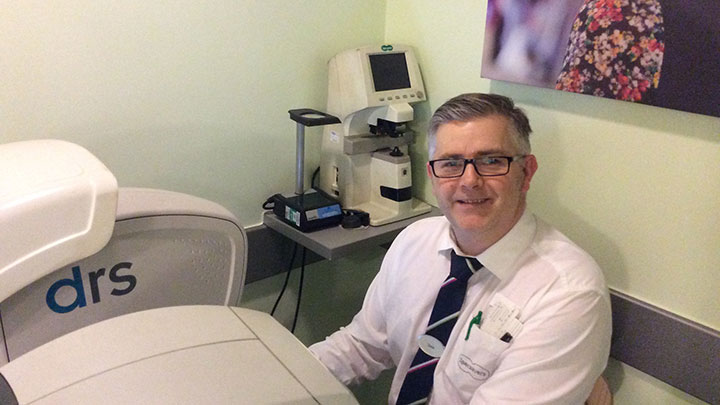 Optometrist Steve Morris has been named the winner of this year’s Specsavers UK clinical photographer of the year annual competition.

The winning picture that was captured by Mr Morris, who works at Specsavers in Wickford, was a fundus image of a young girl’s disc with a double helix looping blood vessel (pictured). He wins a PENTAX digital camera.

Specsavers has been running the annual photography competition for eight years and uses it to showcase images captured by staff in branches of the multiple globally.

Mr Morris’ image was singled out by the judges for its “quality with a sharp focus and even illumination of an interesting finding.”

Speaking about the competition, Specsavers’ director of clinical services UK, Simon Williams, said that the judges “continued to be impressed year on year with the range of really interesting conditions and pathology captured, and the quality of the images.”

He added: “As professionals, the use of fundus photography really enhances our ability to capture, monitor and diagnose conditions, allowing the best possible outcomes for our patients – this competition celebrates that professional expertise amongst our colleagues worldwide.”

The competition’s global winner was named as Chun Peng (Perry) Yeow, who works at Specsavers’ Warnbro Centre branch in Western Australia. The practitioner was recognised for his fundus picture of a patient suffering from the hereditary, sight-threatening disease choroideremia.