Newly-qualified optometrist, Karan Vyas, discusses how the Thomson Test Chart is his testing chart of choice for all types of patients 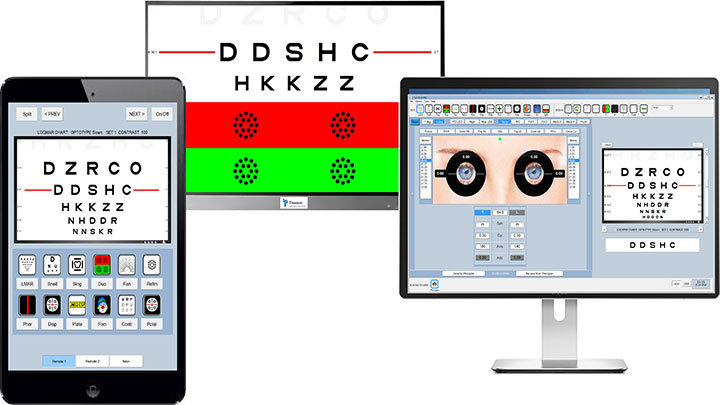 Every optometric clinic, be it on the High Street or in the hospital setting, requires one piece of key equipment – the test chart. Without this vital piece of equipment, every optometrist would be lost. For me, the Thomson Test Chart 2016 is the biggest asset and most important piece of equipment that I have in my clinic and I use it with every patient I see.

I use the latest version of the tool, the Test Chart 2016, which has a wide range of vision test options that are suitable for both distance and near vision testing. However, for me, one of the best features of the test chart is the inclusion of a LogMAR chart. The LogMAR chart is, in my opinion, the chart of the future for optometric practice, with Snellen very slowly, but surely, being left behind.

One thing that I find particularly useful is the randomise option, which prevents patients from memorising the letters in order. It also extends to larger letters, enabling the optometrist to take more accurate vision acuity measurements.

The letters can be interchanged for different languages, including Gujarati, Arabic, Punjabi and Arabic, while it also allows the user to change the optotypes to the universal language of numbers.

The 2016 version of the test chart includes the Sheridan-Gardner test and Kay Pictures, meaning that testing children has become far easier.

This latest version also includes a variety of fixation targets, which, again, not only makes performing sight tests on children simpler, but also makes it a more enjoyable experience for them. As an extra bonus, optometrists can also create their own fixation target slide show.

With many of the binocular vision tests included with the Thomson Test Chart 2016, optometrists can perform stereopsis tests (although this could be improved), phoria tests and fixation disparity tests with ease.

"The Thompson Test Chart 2016 is a dynamic eye test chart that not only expands the abilities of the optometrist in the testing room, but allows for this to be done in an efficient way without compromising on clinical standards"

Thomson Software has also included a contrast sensitivity chart in this version that enables practitioners who want to expand into low vision services the option to do so.

The chart includes tablet interfacing, allowing the practitioner to perform a huge range of near vision tests in a more controlled environment that reduces any desktop-based computer inefficiencies.

Finally, the chart also features a wide range of other resources such as an Efron grading chart and a contact lens fitting tool, which help to speed up the more general processes in optometric practices.

Overall, the Thomson Test Chart 2016 is a dynamic eye test chart that not only expands the abilities of the optometrist in the testing room, but allows for this to be done in an efficient way without compromising on clinical standards.