Optometrist, Dilesh Makwana, shares why the BlephEx has become a must-have tool in his blepharitis-fighting armoury 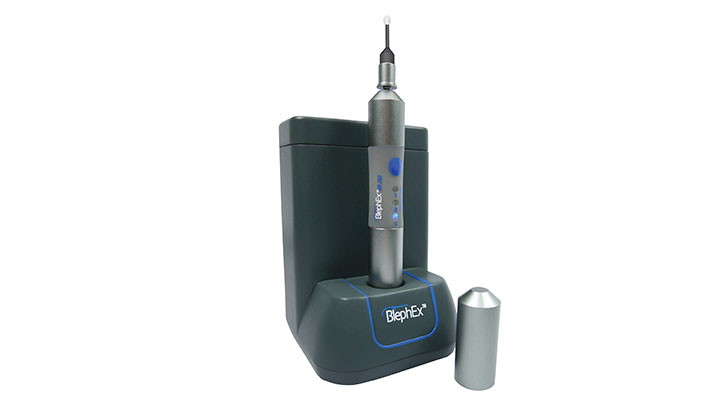 Initially, I admit that I was sceptical about using the BlephEx before having a go. However, six months on, I wouldn’t be without it.

Like most practitioners, I see an awfully large amount of symptomatic blepharitis patients, where conventional treatments haven’t helped them as much as they had hoped.

Compliance seems to be the chief complaint – when patients are working and leading hectic lives, it’s difficult for them to take time out for a heat therapy and a lid wipe session. Despite repeatedly informing patients about what they should be doing and the benefits of doing it, it often feels monotonous and non-productive. As a result, I began to explore what other options were out there and if I could do anything else to help. This is when I stumbled across the BlephEx.

Blepharitis is probably the most common disease that practitioners see in practice. Most patients have it and, as we all know, it becomes more prevalent as we get older.

Typically, the lid margin appears reddened and the lashes show a characteristic crusting and collarettes, which leads to patients seeking advice. These anterior signs usually have a causative seborrheic component and an infective element related to staphylococcal infection. The latter often promotes chronic disease with lash loss and tougher-to-remove lid debris. Posterior to this, meibomian gland involvement, with blocked gland openings and sebum build-up, adds to the irritation and also destabilises the tear film.

A major problem with blepharitis is its persistence and recurrence, and there isn’t a ‘one-size fits-all’ solution. However, I have found myself a neat little device that helps.

Any patient with an insufficient tear film may be prone to a build-up of bio-film along the eyelids.

Debris on the ocular surface is not being cleaned away by the tear and, as the lids blink across the surface, they pick up the debris, which eventually builds into a bio-film covering the meibomian gland heads. The bio-film can contain bacteria and demodex, causing inflammation and further inhibiting the flow of oils. If left blocked for a prolonged period, atrophy can leave the meibomian glands ineffective. Hence, having an effective way to remove this bio-film is essential. This is where the BlephEx comes in.

A highly absorbent disposable micro-sponge is soaked in solution and spun along the eyelids; the spinning mechanism targets the bio-film and removes the debris. A new micro sponge is used for each eyelid to give optimal cleaning and exfoliation. It reminds me of an electric toothbrush for the eyelids.

The lids are cleaned both posterior and anterior, then rinsed well afterwards. All in all the session lasts about 10 minutes. If a patient is a little anxious, instilling an ocular anaesthetic pre-treatment may be advisable, but so far I haven’t had to resort to this.

"Like dental patients see a hygienist at regular intervals to remove plaque, blepharitis patients would also benefit from a regular appointment to exfoliate their eyelids"

BlephEx’s supplier, Scope Ophthalmics, also provides a lid cam to go with the BlephEx, which is a great way to show progression before and after treatment ­– you’d be surprised about the uptake once a patient sees evidence of improvement.

The patients who would be most suitable for BlephEx treatment are typical contact lens wearers, dry eye sufferers and office workers. However, it can be recommended to almost anyone, including those who are simply keen to get on top of their hygiene with minimal effort.

Like dental patients see a hygienist at regular intervals to remove plaque, blepharitis patients would also benefit from a regular appointment to exfoliate their eyelids. Initially, a six-monthly treatment is recommended. This is in combination with a hygiene care plan as recommended above.

The BlephEx is another tool for practitioners to add to their armoury in the fight against blepharitis. However, it is not a replacement for heat therapy lid wipes and ocular lubricants, but should be used in combination. Nonetheless, it gives me great satisfaction to offer my patients something more.

With minor eye conditions services schemes now actively running nationwide, the whole dynamic of optometry is changing. Practitioners are now exposed to a much broader spectrum of ocular conditions. With a licence to help in a way they have never done before, the perceptions of optometrists are changing and I believe that there is now a place for BlephEx and other similar tools.