Michael Offord celebrates 35 years since opening his own practice 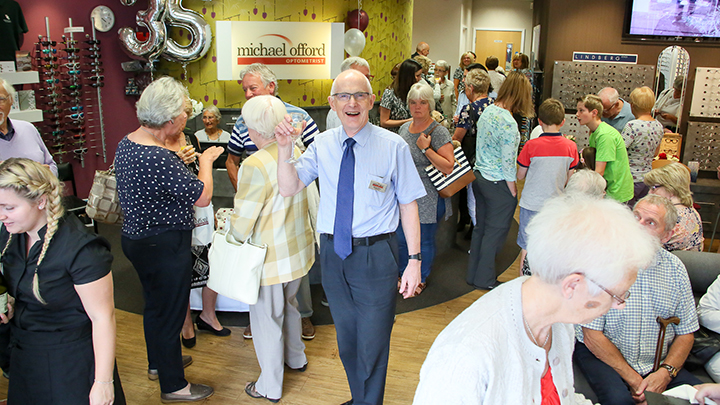 Inviting customers past and present to celebrate the milestone at the practice, Mr Offord’s first-ever patient, Elsie Wearn, was on-hand to cut a celebratory cake.

Optometrist Mr Offord, who is a previous AOP Awards Optometrist of the Year winner, qualified in 1973. His ambition to open his own opticians was realised in 1981. In 2010, the independent had outgrown its first premises and moved to a bigger location which better accommodates its 13 employees and boosted patient base.

Reflecting on his time in practice, Mr Offord said: “The world of optometry has changed almost beyond recognition since the practice first opened, not least with the changes in technology which have improved the accuracy of eye examinations and dispensing and also made it possible to diagnose the early signs of diseases such as glaucoma and diabetes, enabling more timely treatment.

"But one thing that hasn't changed is that we are an independent practice, proud to be independent and truly local to the community we serve."

In addition to owning the practice, Mr Offord works within the Optometry and Eye Casualty Department at Newcastle's Royal Victoria Infirmary one day a week. He also regularly volunteers for Vision Aid Overseas. This year he visited Ethiopia with the charity where he and a project team trained local optometrists and eye care nurses, and conducted routine eye examinations.