As one of the first people to be fitted with the Argus II bionic eye, 67-year-old Keith Hayman shares his experience of being able to ‘see’ again, 25 years after losing his sight due to retinitis pigmentosa 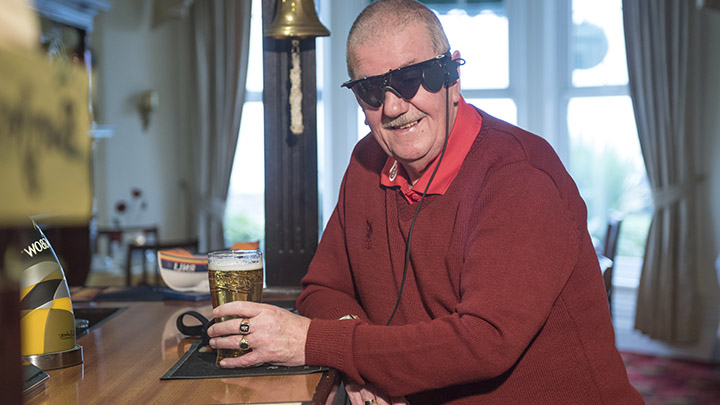 I lost my sight at the age of 31 due to an inherited condition called retinitis pigmentosa (RP). I had been struggling with my vision since my early twenties and let it worsen without seeking help until I was almost unable to perform daily tasks. I was a butcher and it got to the point where I couldn’t read the scales properly.

When I was diagnosed with RP in the early-80s, I was told that there was no treatment and no cure, and that was it. If I’m honest, I wasn’t too shocked as my older brother had already been diagnosed and I knew it was an inherited condition – although we aren’t too sure who we inherited it from as neither my parents or grandparents had it.

My vision continued to deteriorate and I had no choice but to give up work. While it’s hard to say exactly when I completely lost my sight, it felt like it happened quite quickly. At first my night vision deteriorated, which is a common symptom of RP, and then I could only see shadows, even in the daytime. After that it went completely dark.

Vision in the future

One morning six years ago my sister telephoned me to tell me about an RP trial that was taking place at Manchester Royal Eye Hospital – she had heard about it on the early morning news as she got ready for work. The hospital was seeking people who had lost their sight due to RP and who were willing to have a potentially sight-restoring device implanted into their eye.

I went for an interview and shortly afterwards I was accepted onto the trial. It all moved quite quickly after that and on 5 August (2009), I had the four-and-a-half hour operation to have the Argus II device implanted.

On hearing about the trial and deciding to apply, I just thought: “What have I got to lose? At worse there would be no change; and at best, I would get some of my vision back.”

"It is such a tiny device, but it makes such a big difference to my life, it has stopped me feeling in the dark. People who are not blind do not realise how lucky they are"

The device itself is tiny and works by converting images, that are captured by a digital camera attached to a pair of glasses, into flashes. The images, or flashes that I see, are created through a series of small electrical pulses that are sent wirelessly to electrodes in a tiny chip that is implanted in my eye.

After I recovered from the operation, I visited the hospital regularly as I went through quite an intense process, learning how to interpret the signals and flashes. Then I was able to take the device home.

While I can’t actually ‘see,’ what I detect is a series of flashes that I have learnt to interpret into the lines and shapes of objects in front of me.

Today, I don’t necessarily wear the device when I’m at home, but I put it on when I go to the pub or the shops – it helps me see the objects and people around me, maybe not in detail, but enough to understand that there’s something there, and to not spill my drink like I used to.

It was four weeks, and many check-ups, after the operation that I began to notice a change. I remember going to a Bonfire night party and I could see the flashing lights in the sky as the fireworks went off. It was the first thing I had seen for years and I got quite emotional.

Over the years I’ve got better at working out what the lights and shapes that I ‘see’ are, but I’m by no means the best at it – I can tell if a person walks into a room, but I won’t necessarily be able to tell who that person is.

However, having the implant has made such a big difference to my life, as it has stopped me feeling in the dark, I’m not isolated any more. People who are not blind do not realise how lucky they are.

Keith Hayman had the Argus II implanted by Professor Paulo Stanga at Manchester Royal Eye Hospital in 2009. He is one of 10 Britons and 180 people worldwide to have undergone the procedure. The device was developed by US company Second Sight Medical Products.