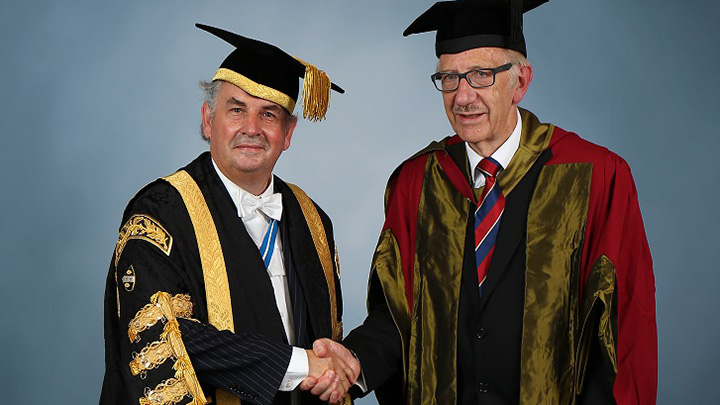 Optometrist Richard “Dick” Roberts has been awarded an honorary doctorate from the University of Wales Trinity Saint David (UWTSD), Lampeter, for his long-term commitment and contribution to the profession.

Mr Roberts, a self-employed optometrist and graduate of the University of Wales Institute of Science and Technology (UWIST), has held many positions throughout his 50-year career, including examiner for both the College of Optometrists and the British Optical Association, and elected member of the General Optical Council.

He was awarded an OBE in the New Year’s Honours List in 1998, and in 2000 he was appointed as the consultant optometric adviser to the National Assembly of Wales.

Most notably, Mr Roberts was appointed chief optometric adviser to the Welsh government. Serving four health ministers, he played a significant part in establishing the Wales Eye Care Scheme and the Wales Low Vision Service. As a consequence of this, Wales is the only place in the UK where patients can get aids from their optometrist that are funded by the Government.

Commenting on the award, associate pro vice chancellor at UWTSD, Dr Jane Davidson, said: “Dick has a fundamental philosophy in life – to improve the quality of life for his patients. ‘To evaluate yourself as a clinician’, he says, ‘you have to ask yourself every day if you’ve treated each one of your patients as you’d want to be treated.’

“He will not focus on meeting a target in the interests of the service if it does not also meet the needs of his patient,” she highlighted.

Mr Roberts was very pleased with the award, commenting: “There is no greater honour one can achieve than being bestowed an honour by your own university. I would like to congratulate all those honoured here today.”

He added: “I would urge all graduates to maintain the principles of integrity, and ask that you add value to the work that you go on to do and in the contributions you will make. You have the chance to shape the society in which you live.”