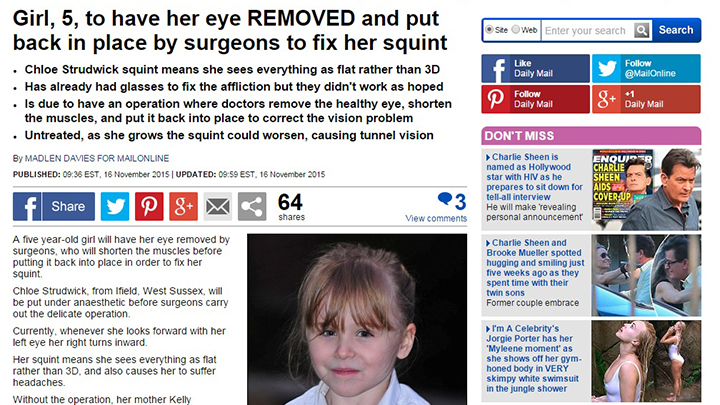 An online newspaper article has caused a stir after misreporting that a simple surgical procedure to treat strabismus involved removal of the patient’s eye.

The article, which first appeared on dailymail.co.uk on Monday (16 November), had stated how a five-year-old girl was due ‘to have her eye removed and put back in place by surgeons to fix her squint.’

It detailed the story of five-year-old Chloe Strudwick, from West Sussex, who has strabismus and is currently waiting to receive a routine operation to shorten the extraocular muscles and bring the eyes into alignment.

However, the article reported: “Doctors will remove her right eye, shorten the muscles attached to it, before replacing it.”

Alongside numerous patients who commented on the article to detail their experiences of the procedure from as far back as 50 years ago, the erroneous reportage evoked a string of critical comments from optometrists, orthoptists and nurses about its inaccurate description of the procedure.

One commenter, ‘Orthoptist’ from London, wrote: “This is an extremely poorly researched article. Very misleading and factually incorrect. The eyeball is NOT removed when doing squint surgery.”

While ‘Patsy’ from Chester wrote: “I was an ophthalmic theatre sister for many years, and can state quite categorically that the eye is never removed to correct strabismus, or during any other operation unless it needs to be removed permanently due to cancer or severe injury. In fact, it cannot be removed without damaging the optic nerve, which would result in blindness and defeat the object!”

Consultant ophthalmologist Melanie Hingorani, a strabisumus expert based at Mooorfields Eye Hospital in London, told OT that the strabismus surgery is the most common major eye surgery performed in children.

Ms Hingorani explained: “It is usually done to improve the alignment of the eyes and less commonly to improve 3D-vision and get rid of double vision where glasses and other treatments have not corrected this. Squint surgery does not prevent visual loss and squints do not normally cause ‘tunnel vision.’”

The strabismus service at Moorfields carried out 711 such procedures between 2014–15. The surgery involves removing the extraocular muscle from the surface of the eye and either excising a small piece to shorten its length, or moving the muscle to a new position on the eye. The muscle is then reattached by stitches which subsequently dissolve.

“The surgery does not involve removing the eye or taking the eye out of its socket to do the surgery,” the ophthalmologist stressed, adding: “The main risk of the surgery is that the [procedures] do not completely straighten the eyes. Serious complications including loss of vision are possible but very rare and the safety in terms of serious eye damage and visual loss is better than cataract surgery, which is considered very safe.”

The offending article has since been corrected online.