“Everybody was pulling in the same direction”

The University of Plymouth’s Dr Leanne Smewing, clinical lead for optometry, and recent graduate Kelly Swoish, discuss how the university Centre for Eyecare Excellence has adapted following the pandemic

Almost two years after the beginning of the pandemic, how has Plymouth’s Centre for Eyecare Excellence (CEE) had to adapt? How does it look different now?

Dr Leanne Smewing, clinical lead optometrist and lecturer in optometry at the University of Plymouth (LS): A big difference has been the change in group sizes. We used to have students in groups of three and they have gone down to two. This was to reduce numbers in the building due to COVID-19. The change worked really well, it seemed that the students enjoyed it and I think they got a lot more feedback from us. So this year we’ve kept them in smaller groups.

I would say we are starting to see a greater range of patients back in the clinics. In October and November we had a lot more patients over 60 coming back. I think it does make a difference for them to come in and only see two students.

The Centre for Eyecare Excellence is based near the University of Plymouth campus and run by fully-qualified staff. The clinic provides optometry training for undergraduate and postgraduate optometrists through supervised clinics with members of the public.

One of our clinic supervisors, who is vulnerable herself, set up clinics on Zoom. I think we have about six or seven low vision patients who are happy to share their history and symptoms with students. This meant the students still got to see the patient virtually and have that experience. Patients would still come in to clinics for certain things, but I think we will probably keep this going forwards because the patients love it.

With the pandemic, we struggled to get students into hospitals as they couldn’t take any students for placements. Derriford Hospital in particular was incredibly supportive and gave some virtual sessions talking through case scenarios. The optometrists and clinicians were able to go through things in a little more detail than perhaps they would if they were with a patient in the hospital. We couldn’t replace the experience of going, which is ultimately what a lot of students want, but they were still getting that experience. We are going to keep these clinics because the learning outcomes were so valuable for students.

Has the experience presented any opportunities to consider further changes going forwards?

LS: The biggest opportunities are the Zoom clinics which I would never have thought to do before, such as the low vision clinics. I would probably continue to hold history and symptoms sessions on systems like Zoom so we have more time when we are in clinic to focus on the clinical elements.

We have had to adapt some of our other clinics. We have a glaucoma monitoring service which we didn’t necessarily engage students with. But because they weren’t getting experience in hospitals, we brought them into those clinics so they could see a wider variety of patients. We received such good feedback that we are keeping them. Once a patient has consented to their case being discussed, it is interesting for students to look at a patient who has had a diagnosis.

Triage has also changed a lot. We will probably keep elements of those changes, and also consider whether we could start to get students involved in triaging things like red eyes with a practitioner. I think triage is something that will probably be here to stay in the careers of optometrists; we will have this patient backlog for a while. Working out who we need to see most urgently, getting that skillset of history and symptoms and a bit of differential diagnosis even on the phone, is a skill that we want to keep up that has developed more over the year.

LS: I think that history and symptoms was particularly important at the very beginning of the pandemic as certain tests could not always be carried out – such as visual fields or pressures. We are in a point now where we can do all of those tests again, but we are still asking students to think what they would be doing if restrictions were in place, and how they would justify the tests they are carrying out.

This is something I will try and continue to instil in students so that we always have in the back of our minds – what would we do differently? What if I didn’t have access to this machine? That is something I would never have considered needing to do before.

What has been a takeaway for you from this experience?

LS: The ability to be able to abandon what you thought was normal, or what you thought was a great idea. I have had to throw plans out of the window fairly routinely. That has started to calm down now, but certainly at the beginning of last year, you would have a plan, then the Government would come up with a new guideline, and you would throw that out of the window and start again.

I have also had to manage people’s expectations. Having to run the clinic and be both the clinical year tutor but also think about what is best for the patients, means sometimes you have to say to students: ‘You are not going to be able to see this vulnerable person because they are not wearing a mask and I need to look after them.’

For students to be able to understand that was really good. They have all become more well-rounded practitioners, because they have also had to throw their expectations out of the window a little bit.

How did you find the changes to clinic following the pandemic? 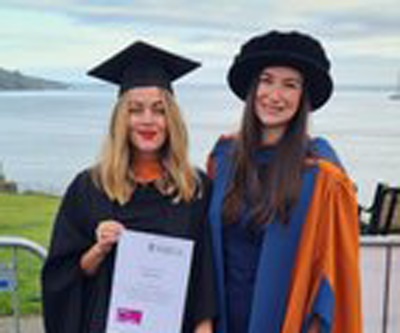 Kelly Swoish, hospital pre-registration student optometrist and recent graduate of the University of Plymouth (KS): The clinic was quite reactive in the moment. A lot of the changes were not necessarily broad, sweeping things, but small changes as we went along. When we struggled with certain demographics not necessarily wanting to come in, the department put on extra sessions so that we could attempt the different competencies, which was invaluable.

The referral competency, for example, was quite challenging to get if we didn’t have patients that had quite so many comorbidities coming in, so the extra sessions were really helpful. If a patient didn’t turn up, then we were also able to attempt competencies on some of the Centre for Eyecare Excellence staff which was really generous of them.

From a student perspective, it definitely came across that everybody wanted us to do well and get the best results possible. Everybody was pulling in the same direction. Although it was a really difficult time, it was an incredibly supportive time.

How did you find the experience of adjusting to the changes in clinic, such as engaging with patients whilst wearing personal protective equipment?

KS: It was challenging. Doing Volk, for example, while wearing a mask and with your patient also wearing a mask, made that view tougher as everything was steaming up. On the positive side, though, if you can learn to be proficient at Volk in those kinds of situations, every Volk going forwards will be easy.

Building a rapport with a patient was a little bit more difficult when you were sitting at the other side of the testing room to try to give them lots of space while you took the history and symptoms. I think we have all got some extra wrinkles from where we were smiling so much with our eyes.

How do you think this experience might have prepared you for pre-reg and the changes to practice following the pandemic?

KS: If I had qualified last year and decided to take a year out before doing my pre-reg, I think I would now be going into my pre-reg as a very nervous person. Because I’ve experienced it already in clinic, it is much more the norm. We’ve had all of the donning and doffing training, we’re used to the temperature checks every day on the way in, and the lateral flow tests.

We are also used to making sure that the patient feels really safe. Perhaps if it’s an older patient and you have a mask on, being aware that they might struggle to hear you, so being very expressive, pausing and ensuring their understanding. This experience has given us a lot more of an opportunity to practice the communication side of things.

What has been a key takeaway for you from the experience in clinics? How do you think these learning will serve you in pre-reg?

KS: Being able to adapt is definitely something I have learned this year. I have also learned to be really organised and to work well with my pair in clinics. It was key to have a good relationship with your pair, and good communication because you needed to plan the competencies that you were doing between the two of you, and make sure that you could roll with any changes.

Organisation is going to be my new best friend going forwards. I think the past year will have definitely helped with this. For example, if I was planning on going for a certain competency, I would always make sure I had another in reserve just in case. Being organised with other ideas is going to be helpful in pre-reg.

I think my communication skills with other professionals have grown. As a pre-reg, you have to be very honest with your supervisor and comfortable to hold your hands up when you don’t know something. This last year has helped me to grow the confidence to go into pre-reg knowing that I want to be really honest.