Life as a locum

Rochdale-based locum optometrist Atif Hussain was one of the first to sign up to work for the NHS’s Test and Trace team. He tells OT  about his new role handling local outbreaks

I've been a locum on and off for probably a decade, in between being a resident and doing other things. I've now been locuming full-time for a couple of years. I got into it for a variety of different reasons, many around the fact that it allowed me the flexibility to do other things.

Of course, it pays better than most resident jobs. It allows me take off time when I want to. There's an increasing number of people working as locums, with the flexibility that it offers.

I like the fact that there's a good variation in my day to day work. I work for two or three practices regularly. I move around to try out different practices as well. It allows me to meet different people and different teams and see different ways of working. The job itself can get quite repetitive at times, but when you're working in different settings, they can keep things interesting. 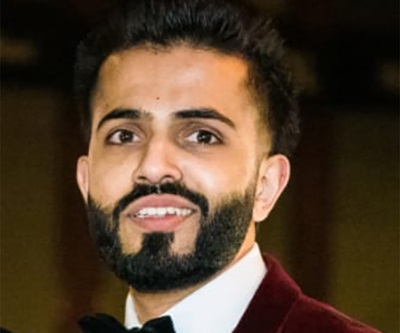 Beginnings with Test and Trace

For the first month and a half of lockdown, I wasn't doing anything. That was quite a shock to the system, but at the same time it allowed me to spend more time at home, because I often work away. It was nice doing things that I don't normally get the opportunity to do.

I was just browsing the internet one day, and on Facebook I noticed the advert for clinical caseworkers.

Optometrists and other healthcare professionals basically form the tier two within the Test and Trace programme. My initial job role was as a clinical caseworker, as opposed to a contact tracer.

Clinical caseworkers speak to positive COVID-19 cases the vast majority of the time, but sometimes also deal with high-risk contacts that have been elevated to us by the contact tracing team. We’d ring them, chat about how they're doing, find out about their symptoms, and ask them if they need any advice. We’d discuss if they need any support in any other way, from the local authority, and find out if anyone in their household is clinically vulnerable. If that’s the case, we’d give them the appropriate advice on moving those people out of the house. We’d discuss their circumstances and symptoms, and talk about where else they'd been. Some people might have been at work, and depending on the work they do we'd do a risk assessment. They might have been in a school; they might have been in a high-risk setting. These sorts of cases need to be escalated.

With all that information gathered, we’d update the record. After that, the contact tracers call the contacts to advise them to isolate for 14 days.

I've had people in mental health crises. Some people that I've spoken to have really been in a very difficult mental state. I offer them advice and put them forward to services such as The Samaritans.

Elevated to the Outbreak team

I’m now part of a small group of experienced case workers who are providing support to Public Health England during the localised COVID-19 outbreaks. My new role is part of the Outbreak team, and at the moment I’m focused on cases in Blackburn with Darwen – one of the locations within East Lancashire that currently has extra lockdown restrictions imposed. The Outbreak team offers a local, targeted approach for areas experiencing an increase in the number of positive cases. I’ve also worked on cases in Leicester - the list of areas we deal with is liable to change or be added to, depending on where cases numbers spike.

We’re alerted to what’s going on in the local area, so we can target our knowledge and training and concentrate on what services are available. As well as discussing a patient’s symptoms and general wellbeing and doing a risk assessment, we discuss in detail the support we can offer locally as well as through the NHS Volunteers Responders Service. This is a service of volunteers that can help with everything from food shopping to picking up prescriptions. This helps people to self-isolate effectively.

In this team we need to speed things up in order to ensure rapid containment of local outbreaks. We advise people to tell those they’ve been in contact with that they’ll need to self-isolate for 14 days. When the contact is told to isolate, they’re also told that someone from NHS Test and Trace will be contacting them. This means they’re more inclined to answer the call when we do contact them. After we’ve spoken, we upload the information we’ve gathered, and a contact tracer follows up with them as a safeguard.

There’s always been a sense of urgency within the Test and Trace programme. As a clinical caseworker, I’d ring contacts three or four times a day, for at least 96 hours, until I reached them. In the Outbreak team, as we’re dealing with a more urgent situation, there’s a 48-hour limit on contacting the cases. If after 48 hours we can’t make contact, we escalate it and a healthcare professional visits their house to make sure they’re ok. With the work we’re doing, that’s really the key.

Within Test and Trace there are optometrists, pharmacists, dentists, doctors and various other healthcare professionals. It allows us to use our expertise in discussing with people how they're getting on, what their symptoms are, and if they need any advice about anything. We're used to talking to patients on a day-to-day basis. When I first read the job description, I thought, with the existing skill set that we have as an optometrist - talking to patients, taking histories, and finding out about their general health and wellbeing – it’s something that I could use my skills for. It’s very relevant to what we do on a day-to-day basis.

Some of the elderly patients that I have spoken to have been so happy that there's someone that actually has taken the time to call them, and just see how they are. A lot of the cases that we've been calling have been shielding. Developing coronavirus thereafter, especially for those that live alone, has been a terrifying experience. A lot of people have had a long list of questions about things they should be doing. Especially for those patients that don't have much use of the internet, or that don't have a good support network around, having a professional call them means that they can ask the question that they want to. Often, there's a lot of misinformation that goes around. The advice we give them is based on the up to date NHS and government advice, based on science and fact. We can alleviate their worries and put their minds at rest.

The expertise that we have as optometrists allows us to identify risk to different people, depending on their systemic conditions, it allows us to make a judgement as to what symptoms could be relevant

It's really important because, as society tries to return back to normal, if the people who are COVID -19 positive and their contacts aren’t isolating, the service doesn't work. It puts the rest of us that are going back to normal at a significantly elevated risk.

The expertise that we have as optometrists allows us to identify risk to different people, depending on their systemic conditions. It allows us to make a judgement as to what symptoms could be relevant. Also, we're used to counselling people, and having difficult conversations, so it puts us at an advantage.

There are a few optometrists I know that are also working in Test and Trace, and they've felt like their expertise have been appreciated. They feel like they are making a difference, and they're doing something where they're valued. I think a lot of people are enjoying the role.

It's imperative for the service to work efficiently, for us to avoid that second wave, and for the public to engage

Prior to this, I was looking at different ways in which I could help support during the pandemic. I registered my interest with the NHS for a variety of different things. I guess this was the best way that I could use my existing skillset. And I was quite lucky in that when I applied for it initially it was in the very early stages, so I was one of the first clinical caseworkers within the programme. And that was good because I managed to get my training in quite early, and I've seen the programme evolve from its early stages. It's been good seeing how it's developed since then, and the changes that have taken place.

There isn't a set end date for Test and Trace. I think the expectation is that the programme might be open for up to a year, or more. As the demand for locums increases, I'm thinking more about hopefully doing a mixture of both locuming and this work.

I, along with a lot of my locum colleagues, feel that, with the locum rates being slashed, they’re currently too low. It's come as a surprise, at a time where demand for locums is so high. A lot of locums that I speak to, myself included, feel that we don't want to return to locuming until we're valued and paid appropriately, just like any other clinician or healthcare professional.

We are genuinely making a contribution to reducing that second wave. It's imperative for the service to work efficiently, for us to avoid that second wave, and for the public to engage. There’s a preconception that the service is simply about tracing contacts. Actually, that's only a small part of what it does.

More Life as a locum