Learning to adapt and become a practice manager

Optometrist and co-owner of Allister and Simpson Opticians, Mark Simpson, discusses his journey through optometry and becoming a confident and effective manager and practice owner

My first experience of optics was at the age of 11 when my dad took me to the local opticians for a sight test because he was concerned that I kept giving the ball away to the wrong team on the football pitch.

It turned out that I was very short sighted – I was prescribed my first pair of glasses, which was a great feeling of relief. Shortly after that I also started to wear contact lenses while playing sport, including football.

I wasn’t really sure that I wanted to be an optometrist at first.

I studied biology, chemistry and maths at A Level and was planning to study medicine. It was my maths teacher, Mr Brown, who suggested optometry to me; he had an optometrist friend who really enjoyed the profession. I did some work experience at my local opticians, a pharmacy and a hospice. Optometry appealed to me and I later enrolled on my optometry degree at Cardiff University.

Since my pre-reg, my plan had been to open my own practice one day. Over the preceding years I worked on getting my confidence up clinically and learnt from the management teams that I worked with

After graduating, I completed my pre-reg year at Boots Opticians in Northwich.

It was a really busy franchise practice and I had the opportunity to work closely with the owner. I was his first ever pre-reg and he really spent a lot of time with me. I learnt a lot both clinically and business-wise and my time at the practice set off lots of ideas in my head for my future.

A year after qualification, I joined Boots Opticians in Warrington.

I was there for around three years, during which time I was offered my first taste of management and I got involved in staff training. I was later offered the role of optometric manager, during which I learnt a lot about health and safety, staff policies, complaints and cash flow.

After five and a half years with Boots, I was ready to try something different.

I started looking at the job opportunity pages at the back of Optometry Today and saw an advert that said: ‘Cheshire opticians looking for optometrist with the view of succession.’ There were no more details, so I called the practice to find out more. It turned out to be situated half a mile away from where my now-wife’s family lives and things progressed from there. 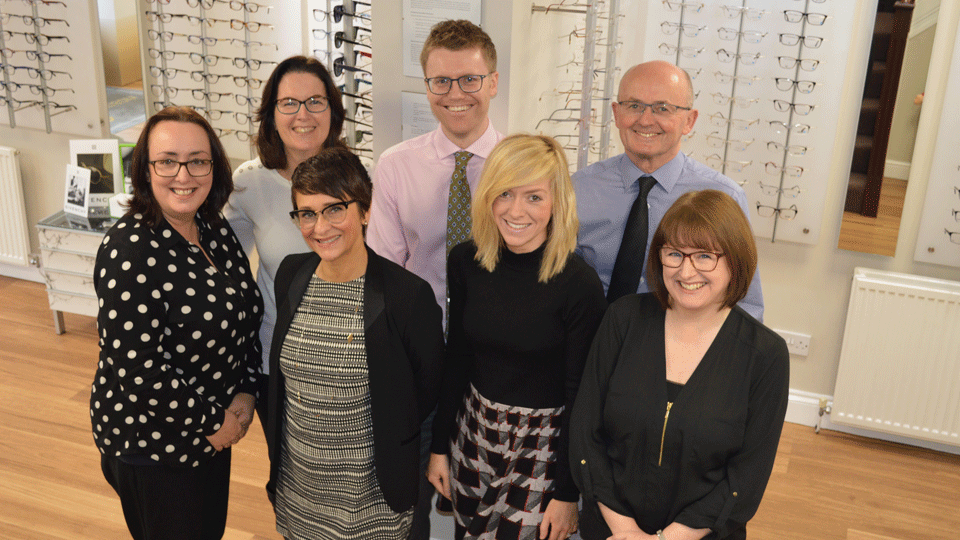 The team at Allister and Simpson Opticians

Initially, I arranged a couple of locum days at the practice in order to get a feel for the place.

I got on really well with Jeremy Allister who was the optometrist-owner, and the staff and patients were really nice as well. Before officially agreeing to make the move, we looked at the trading accounts for the practice and when we were happy to proceed we agreed a handover timescale. The plan was to take over the practice in three years. During that three-year period, I was shadowing the practice owner and arranging my finances.

Jeremy advised me to join the local optical committee (LOC), which I did.

I found being part of the LOC particularly beneficial for building links with fellow business owners. It also provided me with access to educational courses that I wouldn’t have had otherwise. This included LOCSU’s leadership skills course, which has helped me with becoming a business owner and manager.

My wife and I officially took over and became owners of the practice, which is now named Allister and Simpson Opticians, in July 2018.

Since my pre-reg, my plan had been to open my own practice one day. Over the preceding years I worked on getting my confidence up clinically and learnt from the management teams that I worked with.

The biggest challenge that I have faced as a manager and business owner is HR.

My personality is not loud and overpowering and I had to develop different ways of management that fit with me and allow me to be a good, effective manager. I have found that, generally, staff will often resist new ideas if they are not on board with it in the first place. Since taking over the practice, I have actively involved staff in, for example, the selection of the frames that we stock. By asking staff for their views on what brands we stock means that we have brands that they like and feel confident talking to patients about.

I have learnt that a little praise and thanks can go a long way.

It is important to take an interest in your staff as they play an important role in your customers journey. If they are happy, it is hard for your customers not to be. Everyone’s role in the practice is important and you must try to praise staff whenever they do something well.

The biggest success over the last year has been changing the way that the practice looks and feels internally and online.

It’s amazing how many patients comment on how nice and modern the practice now looks on a daily basis. My optometrist wife Becky has led on this and we feel really proud opening up the doors every day.

One of the most rewarding things about practice ownership has been seeing the practice grow into the place that my wife and I envisaged when we purchased it.

A highlight was certainly the day that we changed the sign at the front of the practice, renaming the practice Allister and Simpson Opticians. Our families came to mark the occasion with us and it felt amazing.

While there are some small visual changes that we would still like to make to the practice, we also have some important planning to do for the future.

We are very fortunate to have the past owner still working at the practice. However, he will eventually, retire in the next few years so we need to think about future-proofing. I would like to take on a pre-reg who could potentially become our second optometrist in due course. We are also looking to branch out into bespoke spectacle collections and plan on taking some staff to Silmo and Mido over the next couple of years to support us in this selection.

I have always enjoyed sport and staying active so if I wasn’t an optometrist, I would be a PE teacher or a ski instructor.