This year, a milestone moment occurred when NHS Digital revealed that more patients had attended outpatient appointments for ophthalmology than any other specialty.

Ophthalmology appointments accounted for 7.6 million hospital visits in 2017–2018. This annual total was greater than the demand for each of the specialities of trauma and orthopaedics, physiotherapy and diagnostic imaging.

With an ageing population, the demand on the hospital eye service looks set to increase.

Making better use of the skills that optometrists possess is one way that hospital trusts are addressing their burgeoning workload.

Optometrists now form a crucial part of the hospital workforce, with ophthalmologist Fahd Quhill telling OT: “I can’t imagine my service without optometrists.”

A window into the world of hospital optometry reveals a vastly different view depending on what clinic, hospital or part of the country is in question.

But a passion for clinical challenges and making a difference to the lives of patients forms a common thread.

Ms Melvin is deputy head optometrist at Aberdeen Royal Infirmary and also works as the optometrist lead for Aberdeen city.

She explained that the general skill level of the primary care optometrists in Scotland has increased following the change in General Ophthalmic Services (GOS) contract in 2006 and the availability of NHS Education for Scotland training.

“This means their diagnostic accuracy is greater and the most appropriate cases are being referred into the hospital service with the remainder being successfully managed in primary care. The right patient is being seen by the right clinician at the right time,” she added.

Ms Melvin observed that within Grampian’s Eye Health Network, acute conditions, such as foreign bodies, uveitis, herpes simplex epithelial keratitis and marginal keratitis, are solely managed by primary care optometrists, which differs from the rest of the country.

“The skill level of our local primary care optometrists is very high and is increasing, given the good relationships between ophthalmology and optometry in Grampian,” she said. 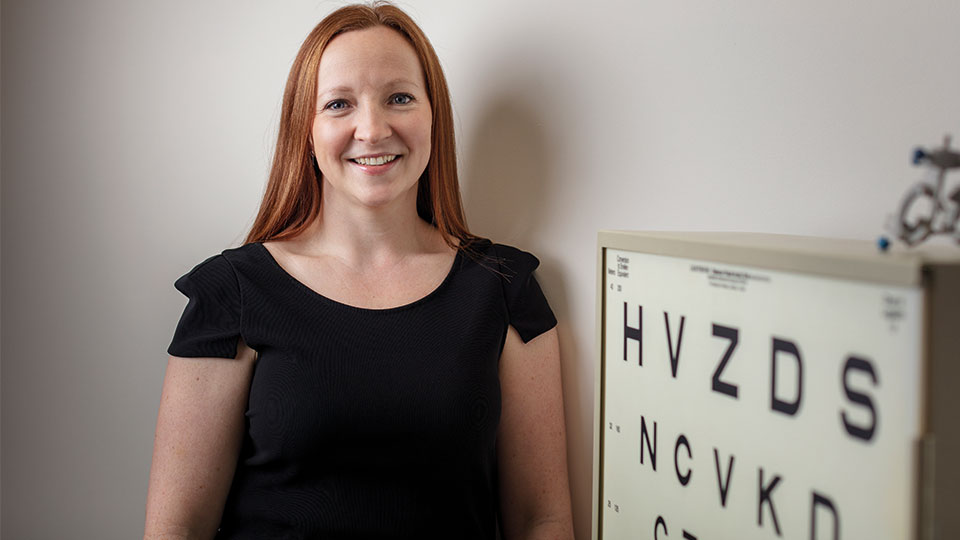 Grampian is a “trailblazer” when it comes to extending the roles of optometrists, Ms Melvin added.

“Many units have recently been in contact with me regarding this upcoming change to the way we practise, given that independent prescribing legislation does not allow the prescribing of parenteral drugs by IP optometrists,” she highlighted.

The number and variety of clinics at Aberdeen Royal Infirmary has changed over the 15 years that Ms Melvin has been with the service.

“We are constantly adapting. You always have to be flexible to meet the needs of the service,” she said.

Ms Melvin added that in the past she worked in cataract, primary care, paediatric uveitis and glaucoma clinics and originally had a refraction clinic.

Ms Melvin told OT that she became interested in optometry as a way of pursuing her interest in a career within healthcare.

“The clinical aspects of optometry always interested me more than the commercial side,” she explained.

She highlighted that the job she started in as a hospital optometrist is very different to the role she now performs.

All the work that Ms Melvin performs is advanced extended role optometry, she said.

“I knew that clinical advancement would be possible within hospital optometry. There is career progression in terms of what I can take on clinically and the ability to be involved with service improvements,” Ms Melvin said.

“For me, those remain my main drivers, she added.

For Ms Melvin, memorable cases in practice include a patient with an opaque, scarred, vascularised cornea.

The patient’s cornea had healed from a fungal infection and previous herpetic eye disease but the patient was in severe pain despite having a neurotrophic cornea, which was eased by fitting the patient with a bandage contact lens.

“I remember how happy the patient was. They had been unable to handle the pain and had become quite depressed with it, but this bandage contact lens has turned things around for them while they wait for a transplant operation,” Ms Melvin said.

Monday: I work in the diabetes clinic. It mostly involves monitoring patients with diabetic macular oedema who are undergoing anti-VEGF therapy.  It is a one-stop clinic with patients receiving their injection on the same day as their clinical review.

Tuesday: In the morning, I work alongside the corneal consultant in the cornea clinic. It is currently a very varied clinic with a huge variety of corneal pathology. We are in the process of streamlining this service and it will include optometrist-led herpes, ocular surface disease and post-operative management clinics. In the afternoon, I see paediatric contact lens patients. I get to know these children and families well, some of them I have been seeing for the past 12 years, since they were operated on as a baby.

Wednesday: I work in my role as lead optometrist for Aberdeen city. It involves working in a liaison role between primary and secondary care for the Grampian Eye Health Network (EHN).  In our EHN, primary care is managing a host chronic and acute conditions historically always managed by secondary care. I am involved in some of the training courses for the optometrists, and also the audit of the service

Thursday: In the morning, I work in the one-stop age-related macular degeneration treatment/re-treatment clinic. Then in the afternoon, I do a virtual medical retina review of clinical notes. There are no ‘live’ patients – they come in earlier in the week to get their imaging done and then I report on their cases and make their follow up appointments.

Friday: I work part-time so I am not in on Friday. I spend the day with my three young children.

She also described the challenge of fitting a contact lens to a two-year-old with aphakia, following the removal of congenital cataracts, drawing on the help of specialist colleagues while at a national conference.

The patient had nanophthalmia with an axial length of only 11.5mm.

“The challenges that came with fitting that child were immeasurable as they required around +75.00DS in the contact lenses,” she added.

Although not a single case, Ms Melvin said that she still marvels at the ocular coherence tomography scans showing improvement after wet age-related macular degeneration patients get their initial loading treatment.

“I am still so amazed when you see the results for something that was previously not able to be treated,” she emphasised.

When asked for key skills that will stand a hospital optometrist in good stead, Ms Melvin pointed to the ability to work well with colleagues, communication and empathy.

She said that hospital optometrists were sometimes tasked with delivering “devastating news.”

“We often have to tell patients that they can’t drive or that they can no longer continue with treatment to an eye. You need good communication skills and empathy to deal with these situations,” she said.

“If you are the type of optometrist who likes working in a team, has a thirst for knowledge and who is always looking to improve their clinical skills and decision making, hospital optometry is the place for you,” she said.

Learning on the job

An aspect of the role that Ms Melvin values is the multi-disciplinary nature of hospital work. She highlighted that there is a sense of comradery among hospital staff.

“You are working closely with other healthcare professionals and you are all doing your best for the patient. That is a nice thing to be part of,” Ms Melvin said.

“Aberdeen is not a large ophthalmology unit – there are 10 consultants here – so I get a lot of on-the-job training because of the proximity I have to the ophthalmologists, which I am very grateful for,” she added.

As well as learning from colleagues, Ms Melvin aims to pass her own knowledge on by teaching the next generation of optometrists.

“I love that bit of my job. It is a privilege to be able to give back what I have been given by my mentors and teachers,” Ms Melvin shared. 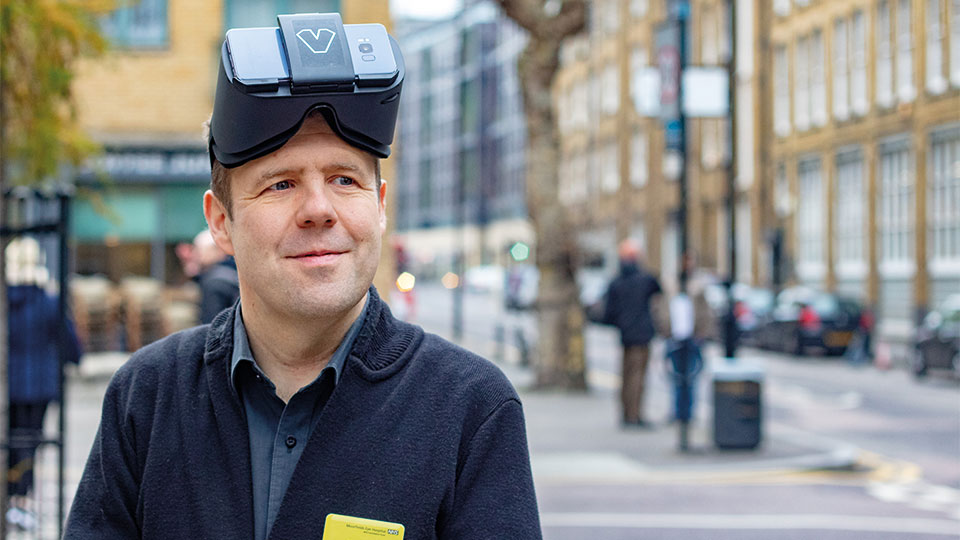 Dr Crossland believes that his research work benefits from continuing to work in clinical practice.

“You see patients and find out exactly what their concerns are. You can then tell your patients about the things that are changing as a result of your research,” Dr Crossland said.

In the two decades that Dr Crossland has been working in low vision research, he highlighted that technological advancements have made life easier for people with visual impairment.

Many of these advancements, such as navigation aids and apps that let someone know which bus is arriving, are not specifically for people with visual impairment.

“Apple has greatly enhanced the acceptability of the tools that people with low vision can use. If you are a teenager who is using a phone to find a train platform no one notices, but if you use a telescope, then that is a question you have to answer,” he said.

“It can be simple things like using the torch on a phone to see better in a dark restaurant,” Dr Crossland added.

You see these young people again and again, growing up, going to school and university, getting jobs. To see them, on the whole, cope really well with visual impairment is really rewarding

During the time Dr Crossland has worked in a low vision clinic, he believes the clinic has built stronger relationships with other services.

He is complimentary of the role that eye clinic liaison officers and counsellors play.

“There is much more awareness of depression and vision impairment. We have counsellors in the hospital, both for children and for adults, who we didn’t have when I started,” Mr Crossland shared.

A key aspect of the low vision clinic is making sure that patients have access to information and support that they need.

Dr Crossland said that helping young people fulfil their potential is one of the best parts of his role.

“You see these young people again and again, growing up, going to school and university, getting jobs. To see them, on the whole, cope really well with visual impairment is really rewarding,” he said.

There is always an element of the unexpected in working with young people, he shared.

“They will ask you a question that surprises you, even after 20 years,” Dr Crossland added.

If you are adaptable and willing to learn different skills, it is a really supportive place to work

When asked about challenges within hospital optometry, Dr Crossland points to the impact of funding constraints within the NHS.

There can be difficulties in quantifying the economic impact of helping a child with vision impairment – as has been done with, for example, a cataract operation.

“In the current NHS funding climate, we have to ensure that our voice continues to be heard,” Dr Crossland said.

He encouraged any practitioners who are interested in hospital optometry to find out more.

Dr Crossland said optometrists should not be daunted by the hospital environment.

“If you are adaptable and willing to learn different skills, it is a really supportive place to work,” he concluded.