Growing your business as an independent

The first-ever optometrists to train in Vietnam have successfully graduated.

The 12 newly-qualified optometrists, who have graduated from the country’s first optometry programme, join Vietnam’s optometrist-cohort, which has previously been trained overseas.

The optometrists officially graduated from the four-year course on 8 November, marking the culmination of a 10-year eye care strategy for the country, which was established in collaboration with the University of Medicine Pham Ngoc Thach (UPNT) and the Ho Chi Minh City Eye Hospital, as well as Vietnamese and Australian governments and the Brien Holden Vision Institute.

Currently, more than 300 optometry students are enrolled at two optometry schools in Vietnam, with the first students graduating from UPNT this month.

The second optometry school is based at Hanoi Medical University and opened in 2015.

It is estimated that by 2020, over 250 students will have trained and qualified as optometrists in the country. 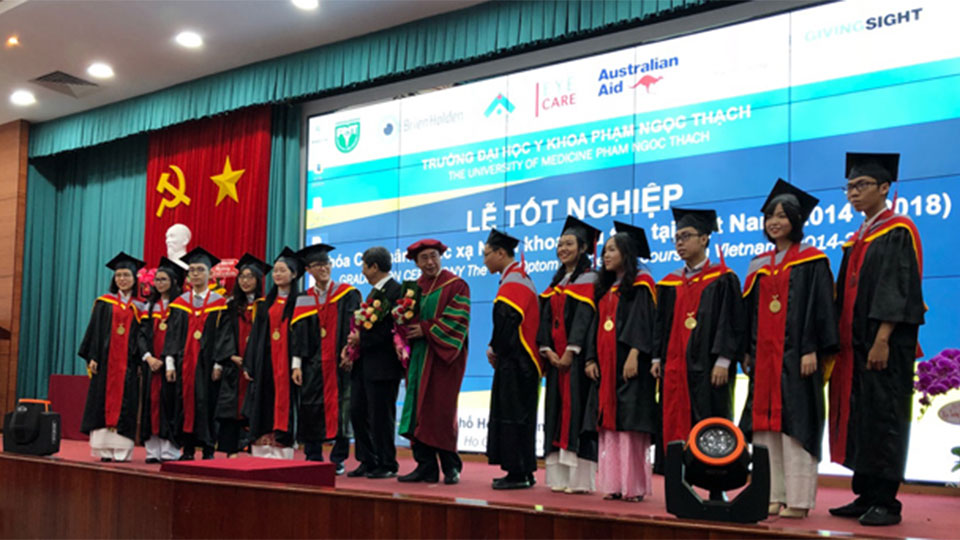 Senior consultant in international health and development, and former director of the World Health Organization’s (WHO) prevention of blindness and deafness programmes, Dr Serge Resnikoff, said: “The development of the optometry profession is a much needed solution to the inequities in the health care system in Vietnam, especially with respect to the elimination of avoidable blindness due to uncorrected refractive error. Optometrists will in time increase the efficiency of eye services in Vietnam and improve the health system’s cost effectiveness.”

An estimated 21 million people in Vietnam require eye care services who do not currently have access to an optometrist.

The WHO recommends that by 2020 Vietnam has at least one optometrist per 50,000 people. However, there are currently just 12 serving 93 million people in Vietnam, associate professor at UPNT, Ngo Minh Xuan, emphasised. He said: “We understand the great need to have optometrists as a vital personnel in eye care, especially to provide the precise refraction services needed by our population. Therefore, UPNT is proud to implement the first-ever Bachelor Degree of Optometry which is educating the eye care personnel to close that gap and to bring the best services to our population.”