More to optometry than meets the eye

Cubitts’ optometrist, Jewlsy Mathews, on how fate led her to study optometry 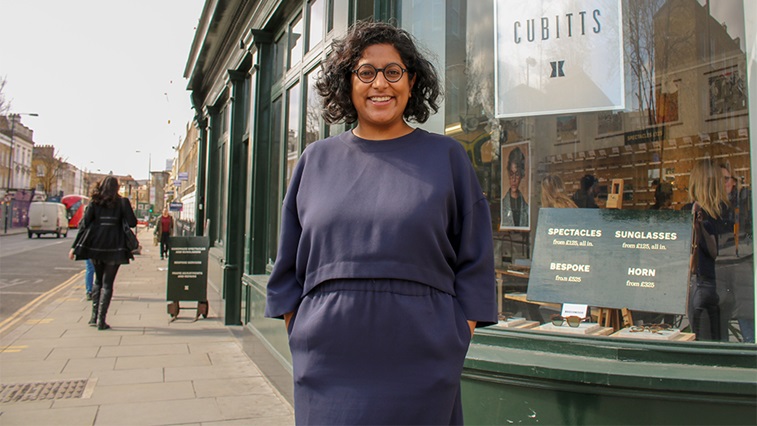 I was about six years old when I had my first sight test.

I was found by the optometrist to be -4D – and I am now a -8D. I don’t remember having that ‘zing’ moment in the sight test when suddenly I could see. However, what I do recall is collecting the glasses, putting them on, looking down and feeling so tall. It was an Alice in Wonderland feeling. I think it was from this moment of magic, albeit subconsciously, where my interest in optics started.

I fell into studying optometry as a degree.

My dad is a doctor and, like many Asian families, was encouraging of medicine as a career. Having applied and jumped through the hoops to get a place at university, I realised that I did not want to study medicine. Around that time, I had a routine eye exam with the optometrist, and decided to ask them what they thought of their job. It was his encouragement, the idea of having patients and engaging with them, and working with optical lenses, that started to change my mind. I knew I wanted to come to London to study. Having carried out further research, I discovered City, University of London, in Angel was an option, and felt it was fate that I should study there instead.

I carried out my pre-reg placement at an independent opticians in Essex.

It was a broad experience of terror, delight and joy. I also secured a place on the Institute of Optometry’s (IoO) pre-reg programme in the evenings and did a day’s internship there. I partially owe my skills to the training I received during this time from Jon Broughton, Judith Morris and Professor Bruce Evans. After qualification, I stayed at the loO, carrying out its primary eye care clinics one day a week, along with teaching at City.

Early on I knew I wanted to understand and experience the breadth of optometry in order to learn what we can do as practitioners.

For many eye care practitioners, optometry is just about the clinical side working in the test room – and that is right for them. But I wanted to try other things, and I dipped in and out of all of the spheres. On balance, I think I explored the breadth of optometry too early – I think I needed to hone my skills more first. While you do your pre-reg year before you qualify, you still have a lot of learning to do.

Eventually, I joined an independent and stayed there for six years.

It was a little family practice, and a joyful experience. It was a community practice where you see a lot of families with kids.

I love seeing kids in the practice.

For most routine sight tests there are limits to what behaviours you can exhibit as an optometrist. But with kids, all the limits are thrown out of the window. It is so easy to excite kids and to make it a game. You have to do whatever it takes to get the information you need for a sight test. If the child is getting sleepy, you might have to do some star jumps to wake them up. Adults won’t do star jumps for you. What we teach students in optometry schools is based on risk and the mistakes you could make with kids could have dire consequences, more so than, say, missing a prescriptive difference in an adult. Confidence when working with children comes with experience.

"As optometrists, we have the joy of talking all day long – but in an office that is not considered acceptable. I learned that pretty quickly"

It was fate again that led me to my current role at Cubitts.

A friend of mine lives on the same road that the Kings Cross practice is on and she told me about a ‘place on the corner’ that was opening. I walked by, knocked on the door, went in with my business card, and said, ‘Hi.’ It just so happened that the owner, Tom Broughton, was on-site, and he showed me around the office. It was great to witness his passion for good eyewear, and it was evident that it was going to be a beautifully designed shop – and an exciting project. I did a few days as a locum, then decided quickly that I would be an employed optometrist for the company.

The business is quite young and it had not had a lead clinician before I took on the role. The company has six shops, so it is quite small, but the business has so many different aspects to it, including bespoke frame manufacturing. Taking on the lead clinical role, means every aspect of the business can grow and evolve with some form of management attached. Tom had the insight to bring this in early on.

In my spare time I completed a degree in Anthropology and I adored it. The beauty of optometry is that you can do it part-time and do something else part-time. It is not something that many professions lend themselves to. I am also a passionate climate change activist.

I divide my week into two days testing and two days management.

When I am in the office, I have to quash my impulse to talk too much. As optometrists, we have the joy of talking all day long, but in an office that is not considered acceptable. I learned that pretty quickly. And four days a week gives me one day extra with my toddler.

Our next project is moving Cubitts Kings Cross to a new retail site called the Coal Drops.

The architecture is stunning and the plan for the shop is going to be really beautiful. The Cubitts brand is ever emerging and changing and getting better. If I took a sabbatical for six months, my hunch is that things would be unrecognisable when I got back. In this environment, everything moves at such a fast pace. We have ambitious plans to expand, and I suspect you will see many more of our shops around soon on the High Street.