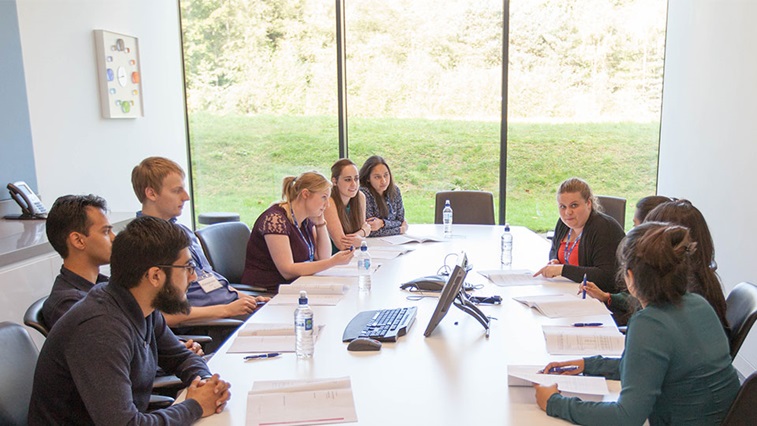 Since its launch in 2015, the Johnson & Johnson Institute’s Success Through Education Programme (STEP) has helped to guide hundreds of undergraduates through their last year of study and into their first jobs as qualified optometrists.

This blended learning programme was enhanced in 2017 by the introduction of STEP mentors. These mentors are recent graduates who take on the role of supporting current students through their pre-reg period on STEP.

Johnson & Johnson Vision (JJV) is committed to partnering with eye care professionals throughout their careers and the STEP mentor programme is another example of how we support not just those who are newly-qualified, but also those who are currently completing their pre-reg period.

I was chosen to act as one of the first mentors and have spent the last year supporting a group of graduates through their pre-reg period.

When you’re going through the pre-reg period, it can be quite overwhelming. You are working full-time and taking on the role of a trainee optometrist for the first time, but also studying after work. It’s a steep learning curve. I was lucky to have a lot of support when I was doing my pre-reg, but I still would have appreciated having a mentor, which is why I put myself forward to become a STEP mentor.

I had first-hand insight into what the students would be going through and could offer practical support to help guide them through their course. I was a mentor, not a teacher, and I was familiar with everything they were going through, so they felt comfortable asking me questions that they might not have been able to ask anyone else.

Mentors keep in touch with their group via social media, providing a simple and fast way to communicate that fits in with everyone’s busy lives. We were constantly sharing messages. I could congratulate them when they passed their assessments, which I think is really motivating. I was always there to reassure them that there is light at the end of the tunnel, no matter how hard they were finding it.

"I was always there to reassure them that there is light at the end of the tunnel, no matter how hard they were finding it"

In 2017, there were 20 STEP mentors supporting 300 pre-registration optometrists. For 2018, this figure is set to rise as 350 students will be going through STEP.

Mentors are chosen through a two-phase application process, which starts with a written submission and is followed up by a face-to-face interview.

During their one-year term, STEP mentors are supported by their own lead mentors, who are established practitioners. They also attend a STEP Development Day at the Institute. This provides a good opportunity to network and get to know senior figures in the industry.

I am still at the start of my career so interacting with JJV and my own STEP mentor gave me the chance to see what they had achieved through their own hard work. That motivated me to aim for success in my own career.

Being a STEP mentor didn’t just inspire me to aim for future success, it also taught me some useful skills. As part of the role, I have hosted courses at universities and helped out at the Institute. I learned presentation and public speaking skills and it made me more visible to the members at the institute.

The one piece of advice I would give to future STEP mentors is to always try to be the role model you would have liked to have had for yourself.