Optometrist and NIHR clinical doctoral research fellow, Jasleen Jolly, on her journey from hospital optometry to clinical research, via Australia and New Zealand 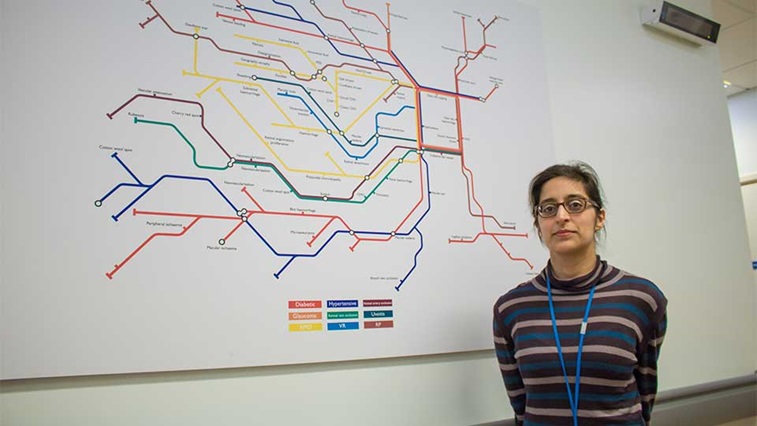 I first became aware of optometry at the age of five when I became highly myopic very quickly.

As a result, from a young age I was seeing the local optometrist on a regular basis. I attended a practice in Manchester called Walwork Opticians and my optometrist was brilliant. He got me interested in optometry and made it exciting to think about vision; those visits piqued my interest about the eye and all things related to the eye.

My parents are both doctors, but I didn’t want to study medicine due to the long and unsocial hours.

However, I knew that I wanted to do something related in healthcare and completed a variety of work placements in medical-related fields as a result. It was hospital optometry that I found most interesting because it felt that you got the best of both worlds.

I completed my pre-reg period at Arrow Park Hospital in Wirral and stayed on as a full-time optometrist after qualification.

I had really good mentors within the department who gave me lots of opportunity to get involved in the different clinics, including electrophysiology, which I found really interesting. Within the hospital setting I got to work on some sponsored clinical research projects and internal research projects. During this time, I also did a little weekend work in a High Street practice in order to build up my experience in primary care and contact lenses.

After five years I got itchy feet and wanted to try something new, so I began enquiring about doing a Masters degree in Melbourne.

From my CV, I was offered a research post in a contact lens research facility and I moved to Australia. I was there for a year but ultimately left because it was quite commercial and wasn’t quite what I wanted to do.

On leaving my post, I moved to New Zealand and worked in private practice.

This was an amazing experience because in New Zealand optometry does not exist in the hospital setting so the scope of practice is very wide and varied in primary care – people actually see optometry as a healthcare profession and patients present with their problems. As a result, it really helped me hone a lot of my skills, including decision making.

I returned to the UK in late 2010 because I wanted to stretch my mind further and there are a lot more research and academic opportunities here.

On my return, I went straight into a Masters degree at the University of Manchester studying Investigative Ophthalmology and Vision Science. It was a joint Masters between the medical and optometry schools and I liked it because I was able to delve deeper into topics and design my own research project too. This gave me confidence as a scientist and showed me the side of research that I always wanted to do.

After my Masters I knew I wanted to go into clinical research, so I moved to Oxford because there is so much exciting research happening here in genetic eye disease. A few months later, I was offered a research role that involved splitting my time between clinical research and NHS clinics, and that was exactly what I wanted to do.

Today I am a NIHR clinical doctoral research fellow and what I most enjoy about my role is working with patients with inherited retinal degeneration.

These patients currently have absolutely no treatment options but we can give them hope with our work that in the future this will change.

A highlight during my time at Oxford to date was when I received an email from a patient excitedly telling me that following treatment it was the first time in years that he could see stars in the night sky.

The patients come in with such hope and are so positive, which gives me all the encouragement I need to keep doing what I am doing. It is exciting to think that what we are doing now, hopefully in the future will become a standard of care.

Getting the email informing me that I had been awarded my fellowship was definitely another; it was a huge achievement and I was thrilled about it. Particularly as I am the first optometrist to be receive this particular award.

In terms of the next step in my career, I’m currently completing my PhD through my fellowship. Once that is completed, I hope to continue to work with the team on exciting, future therapies and to help implement them.

For animal work, the eye is sacrificed in order to assess whether a therapy works but in human work this has to be done by imaging and vision testing so getting this right is absolutely vital to allow any new therapies to be effectively assessed.

While being a clinician scientist is a relatively unknown career path for optometrists, it is such a fascinating field to be in – we are at the very translational edge of research and that’s where optometry has such a big role to play. There is so much satisfaction in understanding the biology of the eye and how that changes in disease as well as therapy.

I really don’t know as I can’t see myself as anything else anymore; I’ve been wanting to be an optometrist and scientist since I was 15 years old.