Pre-reg optometrist at Specsavers in Daventry, Bhargavi Zinzuwadia, discusses finding the right placement for her 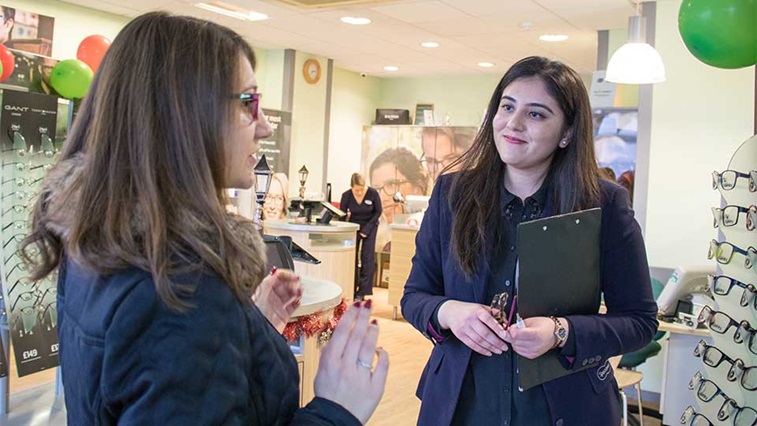 Having considered and applied for pre-reg positions in a variety of settings – independent, multiple and hospital – she ultimately opted to take up a position with Specsavers because of the structure of the placement.

“Specsavers’ summer placements allow you to experience what it would really be like to work in practice. During my final year at university I was also lucky enough to work in a Specsavers store,” she shared.

When applying for pre-reg placements, Ms Zinzuwadia had a clear vision of what she wanted. “In terms of my pre-reg, I wanted something really clinical based, ideally of hospital standard,” she shared adding: “In terms of location, I was happy to relocate at the time.”

It was through a conversation with a colleague at Aston University that Ms Zinzuwadia learned of a possible pre-reg vacancy at Specsavers in Daventry with a supervisor that had experience in the hospital setting and who was also a head of enhanced optical services for the multiple.

“I had a phone conversation with him…he then invited me over here for a general chat,” she shared. While she was not expecting too much from the meeting and was grateful to exchange views with the optometrist, she was excited to later be offered a pre-reg placement under his supervision.

Sharing insight into her first few weeks as a pre-reg, Ms Zinzuwadia says that she was eased into practice. “I started by sitting in and watching my supervisor perform a sight test, and then he would sit in and observe me,” she said before later performing her first sight test alone.

She admitted: “During my first real eye test, I’m not going to lie, I was a bit nervous. I had an hour to do each clinical technique, but it happened and I got through it.”

Learning on the job

Six months into her pre-reg journey, Ms Zinzuwadia has grown as an optometrist and is much more confident as a practitioner, in particular when communicating with patients.

Reflecting on her training period so far, she admits that it certainly “feels different from university.”

“The main thing for me has been reducing my testing times. At first I was going through a check list, but now I understand from taking the history and symptoms what tests I should prioritise and that has helped me reduce testing times,” she highlighted.

“The thing that I have most enjoyed about being a pre-reg so far is meeting new people. Each day is different and you are constantly learning new things throughout the pre-reg year,” she added.

Offering advice to students preparing to embark on their pre-reg period this summer, Ms Zinzuwadia shared with a smile: “Be prepared for the journey and be ready to work hard and enjoy yourself.

More on being a pre-reg