The key is variety

Optometrist, academic and AOP Councillor, Rakhee Shah, on a varied career and developing a passion for myopia control 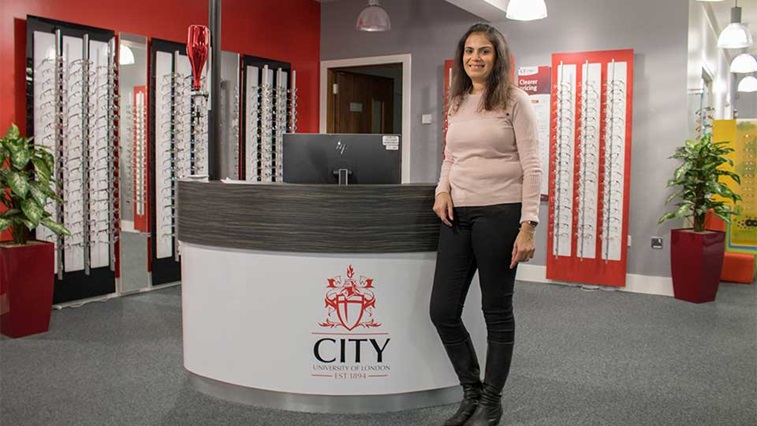 My first experience in optics was when I was 11 years old. I had just started secondary school when I realised that I couldn’t see the board very well.

Growing up in Kenya, eye care was not particularly advanced, but I told my mum and she took me for what I remember being my first eye examination. Low and behold, the optometrist said that I needed glasses to see far away and I would benefit from wearing them most of the time.

After getting my first pair of spectacles, it was a battle of appearance versus being able to see, and I initially refused to wear them. Approximately six months later I found myself really struggling and realised that the spectacles I have been given only six months ago didn’t help anymore. My sight had already changed so much. From then on, I wore my “NHS look” spectacles full-time until I was fitted with contact lenses the following year.

A career in optometry was partly instigated by my visits to the opticians from a young age in Kenya where eye care was not a huge priority.

I knew that I wanted to do something where I could make a difference, and optometry was one of the two fields that I considered, alongside dentistry.

I had work experience in both settings in Kenya. I didn’t do very well in my A Levels the first time as my father was terminally ill. Whilst I was retaking my A Levels in England, my tutor suggested I gain some work experience at an opticians practice as there was a strong likelihood it would be different to my experience of eye care in Kenya. I really enjoyed my work placement and decided that I wanted to be an optometrist.

After qualifying, I worked at the same Specsavers practice where I completed my pre-reg, before moving to a different Specavers branch a year later.

During this time, I was also teaching pre-reg optometrists at the Institute of Optometry. At the time, I knew I enjoyed doing, but I wasn’t sure that I was ready for a career in academia at that time.

"After getting my first pair of spectacles, it was a battle of looks versus being able to see, and I initially refused to wear them"

A colleague at the Institute of Optometry encouraged me to consider doing a PhD. One thing led to another and before I knew it I had agreed to do a PhD investigating clinical care in optometry in England. Having qualified as an optometrist in July 2003, I started my PhD at the Institute of Optometry as an external student with City, University of London in December 2005.  I had two amazing supervisors, Professors Bruce Evans and David Edgar, who are still my role models today. Whilst doing a full-time PhD, I locumed regularly in different practices.

After completing my PhD, I took a much-needed career break to go traveling.

On my return I accepted a role as a domiciliary optometrist at The Outside Clinic. By this point in my career, I had already experienced working in a variety of High Street practice settings, worked as a primary care optometrist at the Institute of Optometry, and taught pre-reg optometrists. I wanted to gain experience in a different area of optometry, one that was going to allow me to develop skills I did not have and make me a better optometrist.

However, whilst working in all of these different settings, the one thing that I have always maintained is a day in practice. I have been working at independent opticians, 20/20 Eyecare in Harpenden, for the last 12 years and am still there. While everything else in my career has changed, that’s the one thing that has been a constant. I tell students that no matter what career path you take after your degree, the experience you gain from working in a clinical practice will always be invaluable and no one can take away those experiences.

When working at The Outside Clinic, an opportunity arose to project manage the Prevalence of Visual Impairment in Dementia Patients (PrOVIDe) study.

This was a large-scale research project funded by the NIHR and led by the College of Optometrists. I managed this project for two years before taking a career break to have my daughter. Working on the PrOVIDe study was certainly a career highlight. Being able to make a difference in the lives of the 700 dementia patients was very satisfying. Some participants had not had an eye exam for over 10 years as they were not aware that domiciliary eye care was available for them.

The independent practice that I currently work in specialises in children’s eye care. Lesley Connors, the owner, is an orthoptist and set up the whole practice to be child-friendly.

It is an area that really interests me as an optometrist. In recent years, this has extended to myopia as we have begun to offer myopia control to our younger patients. I developed more of a research interest in myopia after I “accidently” examined my two-year-old a couple of years ago. She asked for a Peppa Pig sight test and to my horror I found her to be short-sighted at the age of two.

What I most enjoy about my career is being able to influence future optometrists and discuss with them openly the challenges that we are facing in the profession; from myopia in children to dementia in the elderly.

If I wasn't an optometrist, I would be a fitness instructor. It’s something completely different to life as an optometrist, but exercise is a side of life that I have realised that I really enjoy and need.